A Lego Adventure For The Chic Set 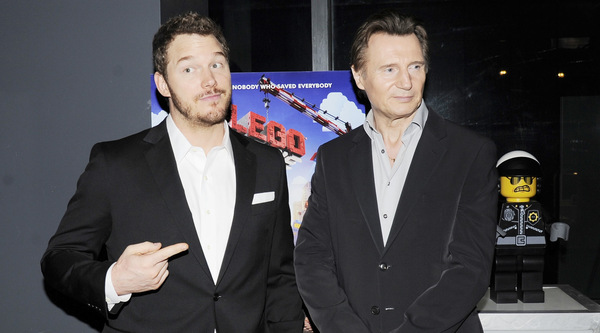 (NEW YORK) Last night, vibrant LEGO blocks lit up the AMC Empire 25 theatre in Times Square for the screening of Warner Bros. Pictures’ LEGO: The Piece of Resistance. For the children at heart types out there, the flick is LEGO history in the making, as the first-ever, full-length theatrical LEGO Adventure. The Cinema Society and Village Roadshow Pictures joined forces to host the playful screening event, which featured fun LEGO exhibits, hands-on building, video games and snacks.

The 3D computer animated story follows Emmet, voiced by Chris Pratt, on an epic quest after he’s mistaken for an extraordinary person charged with saving the world. An equally comedic and recognizable cast rounds out the rest of the LEGO crew including Elizabeth Banks, Will Arnett, Will Ferrell, Morgan Freeman, Liam Neeson and Charlie Day. To match faces to those minifigure voices, Pratt, Banks and Neeson were all in attendance for the film’s big debut. The dapper chaps both suited up for the event wearing classic noir styles. Neeson told The Daily that he was wearing “all Giorgio Armani, even the underwear.” How chic! However, the fashion favorite of the night had to be Banks, who took a style cue from her character WyldStyle taking to the red carpet in a LEGO-inspired navy and black structured dress. “Wyldstyle is the best character that I have ever played. She is a kickass action heroine that takes charge and takes on prisoners, yet is also vulnerable to falling in love,” Banks said. As for the wildest aspect of Banks’ personal style, that would have to be her “funky toenail art,” which she decided to forego for the premiere.

The highly anticipated film drew quite a crowd of fun-loving stars, like Melania Trump, Jill Hennessy, Alessandro Nivola, Alex Lundqvist, Rachel Dratch, Caroline Rhea, Matthew Settle and Rachel Roy, all of whom sported 3D classes and welcomed nostalgic memories while embarking on a journey into the world of LEGOS. A night of action and adventure for all!
SAMANTHA COHEN

Why Did Alejandro Ingelmo Switch Venues For His Presentation?