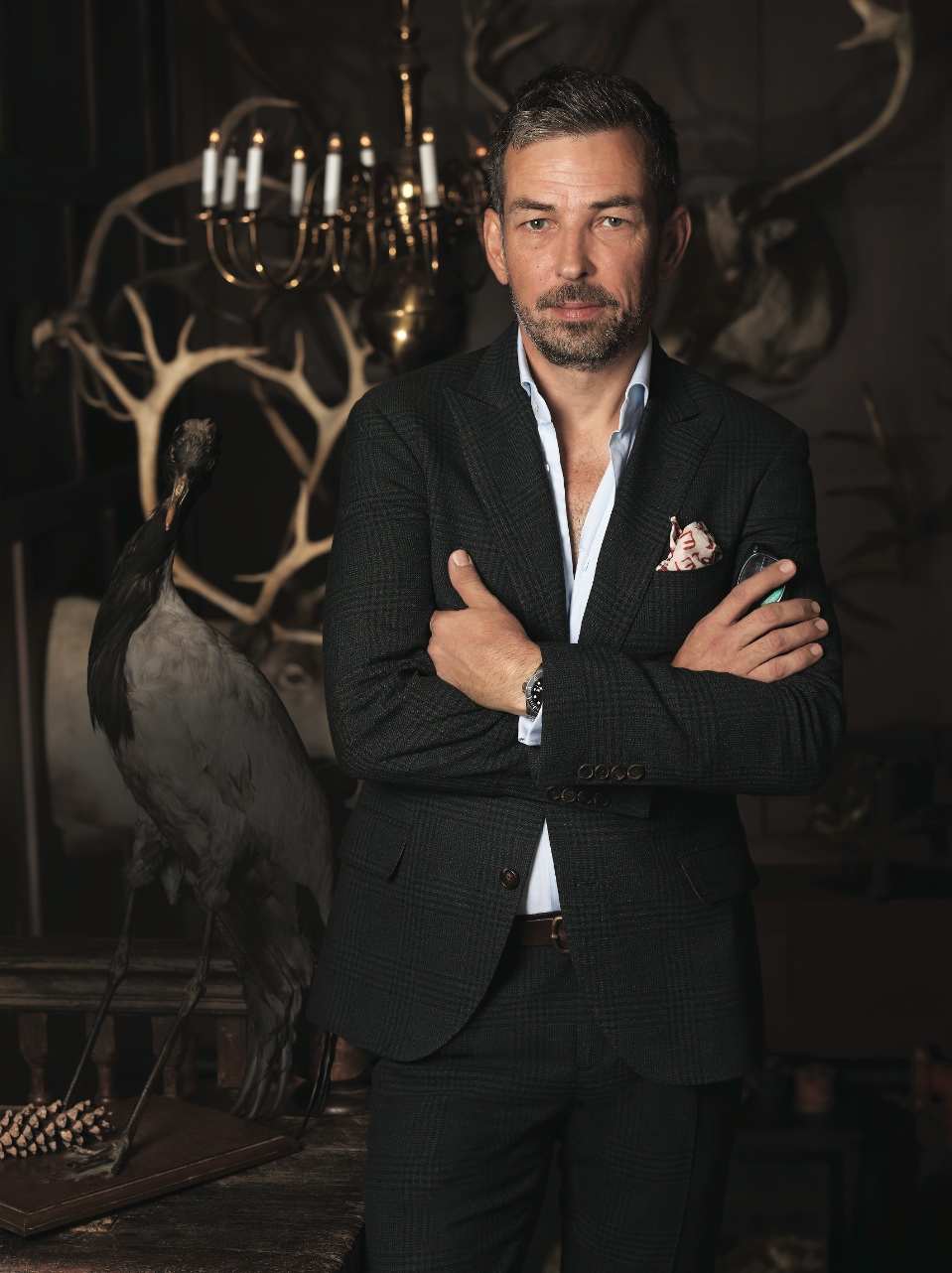 Can you believe it’s been a decade since Esquire fashion director Nick Sullivan crossed the pond? The Daily raised a glass with the natty British import as he looked back fondly on his time in the menswear trenches.
BY EDDIE ROCHE

Congrats, Nick!
It really doesn’t feel like a decade, but I don’t think anything in New York ever feels like a decade. It’s the pace of life here. But menswear in America has gone through such a revolution since I started here. It kicked off just before the recession, when blogs grew and Americana grew and somehow regular guys got more into fashion. Everyone’s raised the bar a touch. A lot of people credit it to Mad Men, but I think it was happening before that.

Those natty metrosexuals, was it?
That was a precursor, sure, but it was mostly an urban thing limited to New York, L.A., and maybe Chicago. Those guys were already interested in fashion. Now, it’s beyond the guys who don’t live and breathe style. They have other things in their lives, too. An Italian once said to me, “What I don’t understand about American men is that they love cars, girls, travel, and luxury, but they don’t love clothes. An Italian man would be missing a major part of his DNA if he wasn’t into clothes!” A little bit of that spirit seems to have emigrated.

Who’s to blame for all those years of square-toed loafers?
I think the grunge thing turned men off of the idea of going above and beyond in a lot of ways. Now, it’s completely flipped. Men are realizing the benefits of making an effort, whatever that means. It might mean merely wearing clean clothes, or wearing old clothes really well, or working the high-low thing. There are so many ways to dress now. It’s almost impossible to make rules, except maybe with black tie.

Were you always a rule-breaker?
A bit, yes. I wore uniforms from age 4 to 18, which encourages rebellion. At 18, it was a two- or three-piece suit in gray or charcoal, but I always bought vintage ones and tinkered with them. Punk was just coming up, so you’d have kids turning up with blue hair and piercings and things. It never said anything in the school rule book about dying your hair blue, although that quickly became a rule.

Did you ever go blue?
I didn’t, no. I just dabbled in mod and punk. I was a skinhead for six weeks, which is how long it took my hair to grow out. Style was much more connected to music back then, much more than it is now. It was an interesting time in the U.K. for fashion, certainly. I’ve still got a few old copies of The Face around and what guys would wear then, no one would go around in now. People looked insane. There was a real street style explosion in those days, but things are much more gentle and classic and normal now. Mostly that’s a good thing.

How did you land in the magazine world?
I fell into it, to be honest. I applied for a writing job out of desperation. It was at International Textile, an old trade magazine for the manufacturing industry to show what trends were coming out of mills in Italy. I did the job for a few months before I realized I was actually interested in it. I was sent to trade shows and gradually did more writing about men’s.

What was your first big gig?
After International Textile I moved over to British Esquire as fashion director. I was there for a few years and then moved to Arena and Arena Homme+, which was an amazing education in fashion because it was much more street and edgy. That was good for me, because it wasn’t my natural inclination at the time. I went on to British GQ, and then American Esquire called.

Was it a tough decision to move to America?
It was a big one, definitely. My daughter was only 3 and my son hadn’t been born yet, so there was never going to be a worse time. But we thought it would be an adventure, so we went for it. It was fantastic, and has been ever since.

Do you remember your first week on the job?
I was getting to know the ropes, but at least there wasn’t a language barrier. Ten years ago, magazines were so different. They were much more basic, and the Internet hadn’t yet revolutionized what we do and how we think about reaching our audience. All that’s changed. I had to learn a whole new market, essentially. I had to learn the way retailers work, the way they stock and buy clothes at the kind of stores that are influential. Guys also dress differently here. When I first moved to New York, I noticed how guys who clearly spent a lot of money on a suit were wearing them two sizes too big. I couldn’t understand that. The fit thing was a revelation. Now, the stores and the American brands are doing a much better fit and that knowledge has spread.

What’s the most challenging shoot you’ve worked on at Esquire?
The one we’ve just done! For our September issue, we drove from New York to L.A. in three SUVs and stopped every 300 miles to dress a different guy. We really didn’t think it would come together because of the logistics involved, but it did, and it was fantastic. We did it to show that you don’t have to live on the Upper East Side to wear a Ralph Lauren suit; you don’t have to be a movie producer to wear a good pair of jeans. We wanted to show the diversity of real men and style working its way across America. I don’t know how we’re going to top it, actually. Maybe we’ll go to the moon?

Who’s been your right hand?
[Senior fashion editor] Wendell Brown has been there since I started. We’re very different and how we approach and wear clothes is different, but we largely like the same kind of clothes, which is really helpful. He’s been tremendous.

Esquire’s Big Black Book is sort of your baby, yes?
In part. It was something that David Granger wanted to do, and I was lucky enough to be in the right place at the right time to articulate it. It’s really evolved quite a bit over the years. We never just sit and say, “Wow, that was great, now we can relax!” We always say, “Damn it, now we’ve got to do something better and bigger and weirder!” The Black Book explains runway fashion to older men and classic clothes to younger men.

You’ve been attending shows for well over a decade now. Do you still get excited?
I do, though even I’m surprised I still do. But the shows are like the spark plugs on an engine. They’re the beginning of everything, and without them the machinery doesn’t run. We need the renewal of ideas and inspiration they provide. In a way, fashion shows are a kind of archaic way of presenting clothes, but they’re probably less relevant to men than they are to women. With women, it’s much more about impact. I find walking around Pitti as informative as sitting at a runway show. I wouldn’t want to do without either of those rituals. Same thing with presentations.

What do you like most about working in men’s?
I’m always really struck by how open everybody is in the menswear world. I thought it would be different. One of the reasons I like menswear is that at the end of the day, it’s just trousers. You don’t have the high pressure you get with womenswear, and I’m glad about that. I’m not saying there isn’t pressure, but there’s less. Maybe that’s part of why I always wanted to stay in menswear.

Do you ever think about where you’ll be in 10 years?
No, not at all. The way I work here is the way I’ve always worked. I’m just focused on this season and what we’re going to do next.

What about where fashion will be?
Given how much it’s changed in the past 10 years, we’re not wearing space suits quite yet. We’ve reached a sweet spot where guys can wear what they want. The suit is dead, but not completely dead. People still want to dress up. You can wear separates with suits and it’s fine. You can be casual. It’s not so much about how clothes will look, but about how men feel about wearing them. I’ve gotten to see a real progression.