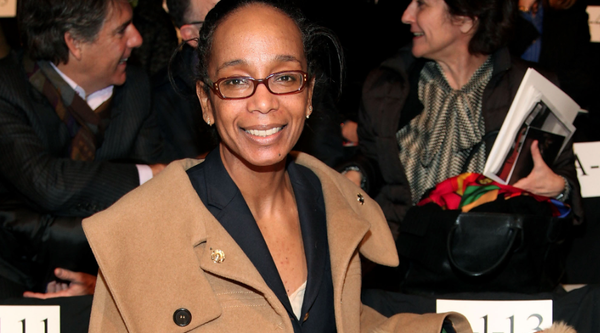 (NEW YORK) Just two months ago, Pulitzer Prize-winning fashion scribe Robin Givhan was unceremoniously stripped of her position within Tina Brown’s complicated empire. But fret not: After a twirl on the inauguration circuit, she’s back at work on her next project, a book on the Versailles show of 1973, that’s guaranteed to be as frank and fearless as she is.
BY ALEXANDRA ILYASHOV

First things first: what happened at Newsweek/Daily Beast?
Any questions about what happened with News Beast—and its future direction—should go to Tina Brown because only she knows.

OK! How did you feel about the way the news broke?
It certainly meant I didn’t have to send a group email letting people know what was going on!

Did you plan to leave Tina’s tribe anyway?
I knew I needed a book leave at some point; I was still trying to figure out the best timing.

So, what’ve you been up to lately?
January was a whirlwind of inauguration-related projects—I contributed a couple of pieces to The Washington Post about it. I also did a lot of television stuff. Once that was over, I was like, “Wow, that book! I’ve got to get to that book.”

One Night at Versailles, correct?
Now’s the first chance I’ve had to devote a significant amount time to book research. It’s daunting. The book is a cultural history of the 1973 Versailles fashion show. It’s due this fall, with a tentative 2014 pub date. I’ve been working on it for the past year. Many of the main people have sadly passed away, but I’ve ended up with a really interesting mix of memories.

Where are you writing the book?
I did some interviews on trips to New York and Paris, but as anyone who’s written a book knows, at a certain point you have to shut everything else out and just focus! I write from my apartment, and I live walking distance from the Library of Congress. It’s an extremely grand place. Their reading room? It’s like reading in the Sistine Chapel.

Swanky! Is your book different from the recent doc on the topic, Versailles ’73?
It’s similar ground. The filmmaker was inspired by the luncheon at the Met a year ago, and the documentary is mostly about the African-American models involved. There’s a chapter in my book about that, but I’m focused on comparing the tenor of times then to where the fashion industry is now. I’ve had a great conversation with the filmmaker, Deborah Riley Draper, just commiserating about the project’s hurdles.

Did you get scooped?
If you’re writing about Lincoln, can you be scooped? No! I’m not sure who started working first, but I know she gave herself a pretty wicked deadline.

So what’s your relationship with The Washington Post?
It’s casual. I don’t know whether it’ll become something more formal, but right now doing anything full-time beyond the book is not really an option.

Did you like doing the online thing for Tina?
When I was there, the print version of Newsweek still existed. That’s predominantly what attracted me. I never fully purged print from my heart!

You once did a six-month stint at Vogue. What was that like?
My biggest takeaway is that people are really fascinated with Vogue! I left because I had a list of stories that were not appropriate for them, but that I wanted to do. I wasn’t trying to reveal the dark inner workings of the fashion industry or anything, but my time there was one of the most enlightening experiences I’ve ever had.

What did you learn?
That I’m a writer at heart. I love being able to tell stories about the industry, but always with transparency for the reader, which often means telling the good with the bad. In magazines, the mission is about celebrating the good and putting the industry’s best foot forward.

Did you leave Vogue too soon?
I was there long enough to get a sense of what it meant to write for Vogue, but not so long that personal frustration had clouded my relationships with people there. You have to give things enough time to know if there’s really a level of discomfort, or if it’s just new and different.

Do you ever get sick of discussing your 2006 Pulitzer?
I don’t really know anyone who’d get tired of talking about their Pulitzer!

Where do you keep it?
It’s on a bookcase in my home office.

Was winning a Pulitzer on your bucket list?
No. People put things in the realm of possibility on their bucket lists! But it was a fantasy, in the dark, primordial part of my brain. The first hurdle was being at a place like The Post that thought fashion coverage was in the realm of the Pulitzers.

Are any other fashion critics out there deserving of Pulitzers?
That’s an impossible question to answer! It’s so subjective. It’s about a moment in time. There are some wonderful critics, but that has to be parsed by the wiser, mysterious minds on the Pulitzer board.

What’s your proudest story?
I’m only allowed to pick one? Well, I’m particularly fond of my piece on Dick Cheney in his parka, while he was representing the U.S. at an Auschwitz anniversary ceremony. All these world leaders were dressed for a somber occasion, and Cheney was sitting there in hiking boots, a parka, and a knit ski cap. My piece was about symbolism resonating much more than words can. I like that story because it wasn’t about observation within the fashion community. Cheney definitely wasn’t wearing a designer garment.

Are you a fashion criticism trailblazer?
I was attracted to the idea of having a specific writing niche. I’m a casual observer of fashion. Politics seep into everything in Washington, including my thinking about clothes.

Are you fond of the front-row grind?
At first, the shows were a very unnerving experience. I’ve always felt a certain amount of quiet desperation in the weeks leading up to the shows. But I do like going. Amazing shows give me a lot to write about.

Let’s talk about your own closet: what’s in there currently?
Ha! I do have a rule that I will not sit around and write in sweatpants. No elastic waistbands! They only cause you trouble.