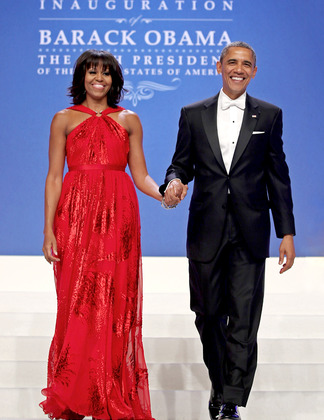 To wear Jason Wu (again) or not to wear Jason Wu. That was the question on Michelle Obama‘s mind pre-inauguration. In 2009, the First Lady wore a white, one-shoulder gown by Wu to the Inaugural Ball, catapulting the designer to fashion stardom. Four years later, Wu again worked closely with Mrs. Obama’s team, yet there was no confirmation as to whether or not she’d remain loyal. As America watched her take the stage, the Twitter community exploded, starting with Wu’s shocked tweet. As for the rouge number’s next destination? Off to the Smithsonian!

Mickey Boardman ‏(@AskMrMickey): It’s INSANE how worked up we all are about FLOTUS’ dress! Mrs O is the biggest thing to happen to fashion in DECADES.

Phillip Picardi ‏(@pfpicardi): Also re: inauguration outfits/couture… can the fashion community please stop ‘dying’? Over everything?

Bee Shyuan Chang ‏(@BeeShyuanChang): Could this mean a comeback for halter tops? #FLOTUS in @JasonWu

Go Fug Yourself ‏(@fuggirls): Twitter basically broke when MIchelle Obama’s dress news came out: Couldn’t get it to load & then looked at the time & went, “Oh, right.” -H

Not Bill Walton (‏@NotBillWalton): CNN is going nuts over Michelle Obama’s dress. I had to make sure I wasn’t watching The Chris Bosh Show on Bravo. Oh, the humanity!

Deanne ‏(@dreamsequins): Oh no- the pitches for the “Michelle Obama” inauguration gown get the look for less dresses are coming…

…For the full scoop on Wu and The White House, check out this morning’s Today Show interview.