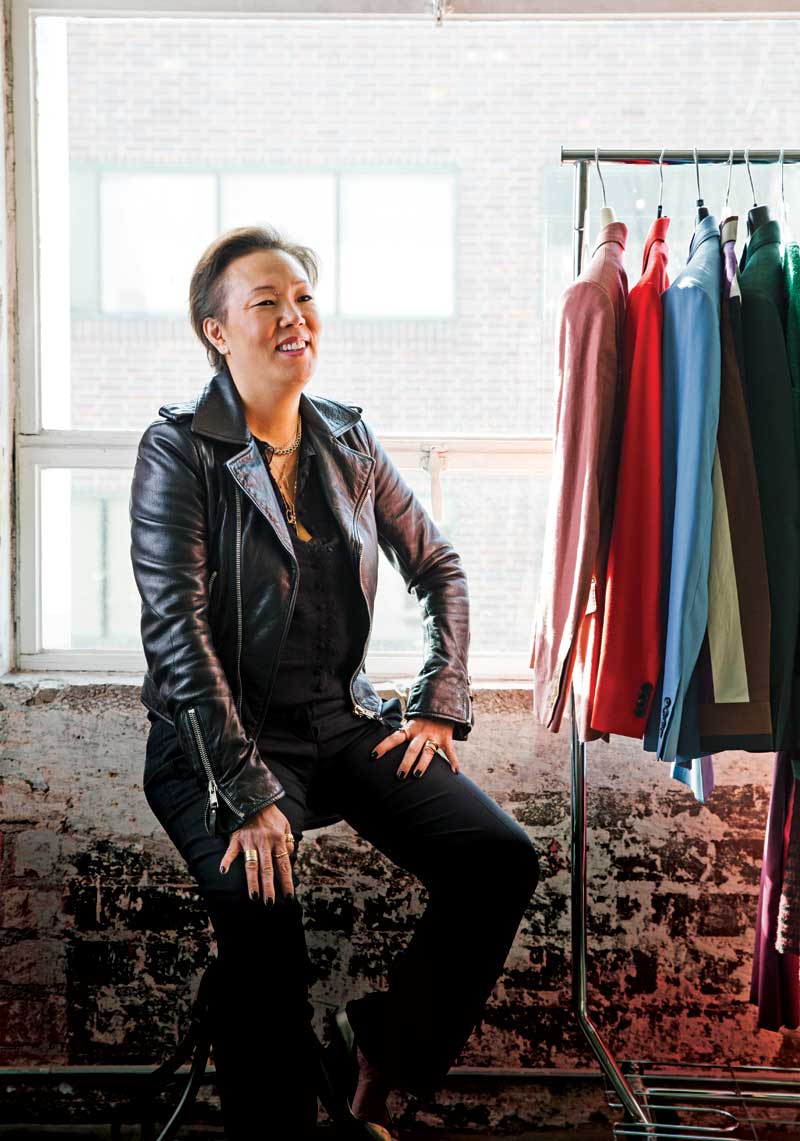 She’s no stranger to seeing Keanu Reeves, Christian Bale, and Jamie Dornan in various states of undress. The Daily recently visited the stylist at her studio to figure out what, if anything, has the power to make her blush.

Growing up in Los Angeles, did you always aspire to work in fashion?
My mother was a sewing manufacturer. She had a factory that started off with 35 women, and then it grew to 75 women, then it was 300. I would work in her factories, but I wanted to be a lawyer. After getting out of school, I worked in a law firm, and I thought, “I only want to be a lawyer because I want to be in politics.” I then realized that I didn’t want to go into politics, and my older brother said, “Rather than doing what mom and dad want you to do, why don’t you think about doing something you like? Since all you do is spend your time reading magazines, have you ever thought of working at one?” I worked in a store for a second in the buying program and realized buying had nothing to do with fashion, and eventually interned at Detour magazine.

What did you learn there?
I wanted to be on set. I called friends and started styling for Shape—anything I could get. At the time, in the early ’90s, music videos were the big thing. I got in with a really great group of young, creative people. We would shoot three or four videos a week. Weezer, Blink-182, 311…I’d have to dress 350 extras in one hour. The next thing became celebrities, because the market fell out of doing music videos. I ended up meeting Keanu [Reeves] when he was promoting The Matrix, and he became a client.

Where did you go from there?
I started styling photo shoots, where my specialty was making people feel like they looked like themselves, but maybe a little bit better. That’s kind of my thing. You would never sit there and go, “Robert [Downey Jr.] looks like…, Vin [Diesel] looks like…, Christian [Bale] looks like…, Scott Eastwood looks like….”

What makes a good stylist?
The most important thing a stylist does is listen. If a client is fussing on the red carpet, he’s not happy or comfortable, and you haven’t done your job.

What’s your process?
We try on a lot of options. I bring in a rack and say, “I’d love for you to go through it and decide what you think you like.” I go online and I research what they’ve worn in the past—what’s worked and what hasn’t. If it weren’t for Getty and Zimbio…! I also work with private clients who aren’t often photographed, so I analyze based on what they look like, and ask, “Do you feel comfortable? Do you like to go a little trendy? Does a double-breasted suit frighten you?” And I listen with my eyes

How did you learn your trade?
Being in the trenches and working on music videos. I was paired up with and mentored by two or three hard-core stylists who taught me that it doesn’t matter how good you are, because everybody has a certain amount of talent. If you don’t treat this like a business, you will go bankrupt. If you are late on a motion picture set, you become a must-not-hire. For me, to be late is when I’m on time. Being “on time” is arriving 15 minutes before something starts.

Your clients are rarely on a worst-dressed list, but when it does occur, how does that feel?
Regrettable! It’s almost always when I style someone as a favor. It’s a “no good deed goes unpunished” thing. It’s only really happened one or two times, but I felt so bad. Because in those instances, it’s because I’ve done what I think is cool right now, rather than what I think is cool for the person. I’m so wary of that now.

Only one or two appearances on those lists is really impressive!
A lot of people would argue that I don’t take a lot of risks. I don’t work with a lot of music people—they take risks. Actors can’t take those risks. Most of them want to have a classic look. When you’re playing roles, you can be as crazy as possible. But on the red carpet, you want it to be about you.

You’ve worked with some of the biggest stars in Hollywood. Do you ever get starstruck?
I’ll joke with my husband and say that my rack is at Keanu’s house, and he’ll say, “Your rack?” The reason I do well with people is because I treat them like human beings. I’m not freaking out that they’re sitting there in their underwear. But you know, you blush.

When, exactly?
When we did the cover of GQ with Mario Testino and Brad [Pitt]. Brad was changing, and Mario said, “We need to take nude pictures of something like that—the body is so good right now.” And part of me was like, “Yeah, that body is pretty outrageous.” But ultimately, it’s work.

Who are some of your other celebrity clients?
Matt Bomer, Robert Downey Jr., Terrence Howard, Vin Diesel, Jesse Eisenberg.

Do you have specific men’s lines that you love?
I’m really proud of my younger brother, Ben. He just started a line called Superism. He spent years being a jeweler, and before that he used to be in music, working with Dr. Dre and a whole bunch of bands. He’s always had a finger on what’s cool. He was a sneaker pimp before anyone knew what sneaker pimping was.

Why don’t you style more women?
I like it when someone has confidence in me, after working with them and getting to know them. I don’t in any way blame female actresses, but on any given day, they can be too tall, too short, too ethnic, not ethnic enough, too pretty, not pretty enough; and so I think it has a tendency to really make them feel insecure, back and front, because people make you feel insecure. And the women I do work with are very secure comfortable women.

You and Katie Holmes designed the ready-to-wear line Holmes & Yang. Where did that go?
It was really expensive to do. We were producing everything here in the United States. We had the opportunity to start a secondary line, but I was in New York City once a week already. I wish I could have slowed down a little bit. Perhaps we’ll make it where it’s not necessarily manufactured here, so you can make it more affordable. That to me is more important than the luxury market right now.

We’re honoring you as Best Men’s Stylist. Have you ever won anything before?
Best Dancer. That is so sad.

Congratulations on your honor!
Thank you. It’s nice to be recognized. I’m not really used to being in front of the camera and it makes me very uncomfortable.

Who has been your secret weapon?
My husband is the love of my life. Every time I’ve ever had anything published, he frames it and says, “If you don’t put them up, and force yourself to deal with them every morning, you’ll never have that gratitude and acknowledgement.” I’m going to start crying thinking about it. I don’t think I’d be doing any of this if it weren’t for him.