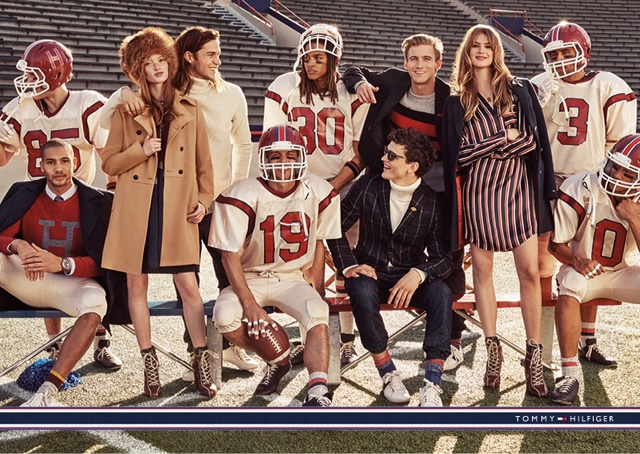 Game day vibes are in full swing in Tommy Hilfiger‘s fall 2015 global ad campaign. Behati Prinsloo, who is no stranger to the brand, stars in the ad and returns as a brand ambassador for the second consecutive season. The campaign, which commemorates  Tommy Hilfiger’s 30th anniversary, celebrates iconic American sportswear fused with varsity motifs. Why was football chosen as this season’s campaign theme? “American football has always been one of my favorite sports and for Fall 2015, we look to the iconic game for inspiration in our advertising campaign and collection,” said Hilfiger in a statement. “As we commemorate our milestone 30th anniversary, we capture all the eclectic details of game day fashion, from athletic stripes to metallic touches and collegiate insignia, all reinvented with our trademark twist that’s irreverent and cool.”

The campaign was photographed in Monterey Park, California by Craig McDean and was styled by Karl Templer. If the faces in the Hilfiger clan look familiar to you, you’re not dreaming. The campaign features a similar cast of eclectic characters from past campaigns, including Julia Hafstrom, RJ King and Miles McMillan. New mods also joined in on the all-American fun, such as Bruno Fabre, Nate Gill and Simon Nessman. Together, “Team Hilfiger” makes the thought of going back to school look, well, not so bad.