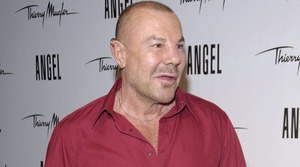 What’s going on with dear Manfred? The Times’ Eric Wilson is reporting that Thierry Mugler is stepping down as artistic director of Thierry Mugler Parfums, while WWD reports that Mugler will be the creative adviser to Joël Palix, president of Clarins Fragrance Group and director general of Thierry Mugler SAS. It’s still a little fuzzy as to what his actual duties will be, but Manfred’s got a plan B all worked out with the development of a revue that’s he’s planning to perform in Paris later this year. Razzle dazzle ’em, Manfred!

May Madness: What's The Fairest Glossy Of 'Em All?