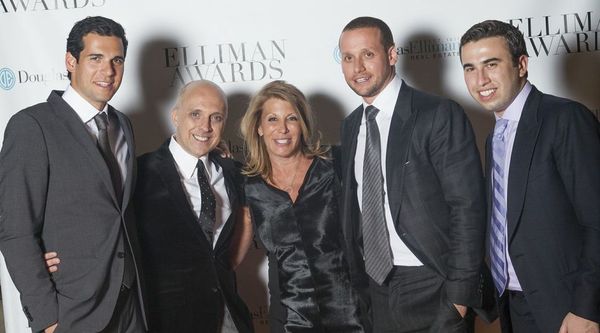 (NEW YORK) Last night real estate giants Douglas Elliman fêted their top selling agents of 2012 at Cipriani 42nd Street for their annual Elliman Awards. Also being celebrated? The ten-year partnership of company president and CEO Dottie Herman and chairman Howard Lorber. FYI: If you’re looking for some of the chicest (and priciest) square footage in New York, it’s likely found under one of their listings.

For those of you who aren’t in the market, perhaps you’d recognize Bravo stars and Elliman’s own Fredrik Eklund and John Gomes of Million Dollar Listing New York. Eklund revealed to The Daily that the craziest closets belong to the fashion obsessed. (Shocker much? Non…) If you’re thinking of palatial walk-in closets like the one’s you’ve seen on MTV Cribs, think again. “You see these Sex and The City girls that want to be on that specific street in the West Village so they end up with a tiny little closet and they have tons of clothes,” said Ecklund. “They end up storing all of their clothes in the bedroom and they actually sleep in the closet! And these are girls with a lot of money, but they’re spending it all on clothes and location.” Some would call that prioritizing…

Herman also dished on the craziest closet she’s ever seen, “Imelda Marcos! I sold a house of hers and I saw all of her shoes.” Appraiser Jonathan Miller, CEO and President of Miller Inc. chimed in, “I appraised all of [Imelda’s] apartments and she had closets everywhere and that’s all I could think about was that she had plenty of places to put her shoes.” Imelda Marcos, who goes by the moniker of “The Iron Butterfly,” was the First Lady of the Phillipines, known for the 1,000 pairs of shoes and 800 bags she left behind when fleeing to Hawaii in 1986 after her husband was ousted from his 20-year rule. Apparently, she promptly re-stocked stateside.

Camilla Papale, Chief Marketing Officer, for Douglas Elliman whose shoe obsession we recently featured, can sympathize. “I live on the Upper East Side, but we sold the apartment and are looking to move downtown. My closet space is very cramped. That’s why we’re moving!” Melanie Lazenby, Executive VP of Prudential Douglas Elliman, who was awarded for her $42 million deal at 18 Gramercy Park set to close in June (the most expensive property ever sold South of 59th Street), said her current listing at 188 East 78th Street has a closet that, “looks like a retail store on Madison Avenue, complete with display cases and rotating eyeglass stands for her sunglass collection.” Closet real estate is a girl’s best friend after all, isn’t it?
PAIGE REDDINGER

Fighting For 'A Place' At The MoMA