Fighting For 'A Place' At The MoMA 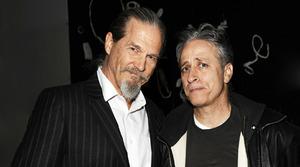 (NEW YORK) A poignant documentary to add to your must-view list ASAP, a night at the museum, and Jon Stewart avec wife rolling through. Such was the case for last night’s Cinema Society, Bank of America, and Food & Wine-sponsored screening of A Place At The Table, featuring Jeff Bridges, an outspoken food policy advocate who launched the End Hunger Network in 1983, and restaurateur extraordinaire Tom Colicchio. The flick delves into the seriously broken system that is nutrition in the U.S., tackling the alarming rates of hunger as well as obesity nationwide (and, appallingly, how often both epidemics dovetail in the same households).

The riveting film brought out the likes of Steve Buscemi, Gina Gershon, Dionne Warwick, Lou Reed, Matt Dillon, and Lauren Bush Lauren, all of whom piled into the subterranean Celeste Bartos theater to get enlightened. Mario Batali (and his tangerine Crocs, of course) got settled early, nabbing a prime aisle seat; shortly after, the Food & Wine crew poured in, including the mag’s EIC, Dana Cowin, and Colicchio’s Top Chef co-star, Gail Simmons. An additional contingent of intrigued folks filled up another theater two flights upstairs, where the “holy sh*t!” reactions to the film’s various story arcs and revelations was quite palpable, your Daily included. Heartfelt intro remarks ensued pre-film, for both theaters, including producers/co-directors Kristi Jacobson and Lori Silverbush (j’adore that white frock, Lori!).

After the screening, a mellow afterparty took place at Colicchio’s FDR-adjacent Riverpark resto, involving fromage for all and chatter among a very foodie crowd. Be sure to catch the film tomorrow in theaters (or in pajamas, if desired, as it’ll be available on iTunes and On Demand for you homebodies out there), s’il vous plait!
ALEXANDRA ILYASHOV

What’s In Your Freezer?