The Editorialist's Kate Davidson Hudson On Motherhood And More 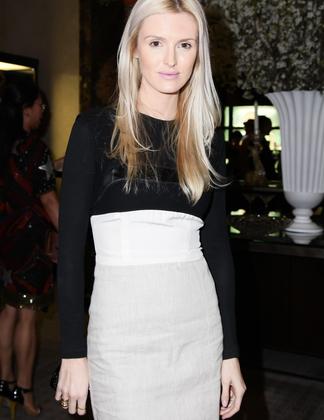 We spotted The Editorialist’s Kate Davidson Hudson pre-show at Viktor & Rolf we sat down to find out how her newfound career in the fashion biz is going. She filled us in on what life post-Elle, running a retail meets editorial site, with fellow Elle alum Stefania Allen. Plus! Find out about her fave new designers, chic Paris hotel digs, and juggling motherhood in between fashion weeks.

How’s it going at the Editorialist?
It’s great! It’s fast and furious, but I can’t complain.

Do fashion folks in Europe know about your site?
I was surprised by how far the brand recognition had spread. Especially, in the realm that we’re navigating in like the Balmains and Célines of the world. There’s also been a big response from the new emerging designers. We have the opportunity to give them more of a platform and voice.

Which emerging designers do you have your eye on?
In terms of accessories, it would be a shoe brand like Aquazzurra. We’re hugely excited about them. We got behind them in the beginning and they’re really taking off. There’s a newer jewelry designer based in China called AS29; we’re really excited to be bringing her on.

Where do you stay when you’re in Paris?
I usually stay at Le Meurice, but this time I’m trying La Lotti. I’m hardly ever in the hotel! Of course, it’s all about location here—and La Lotti is right by the Tuileries.

Have you been able to enjoy the city at all?
Not really! I went home in between cities [Milan and Paris] for a day and a half to see my daughter.

Wow, that’s dedicated motherhood!
I just miss her so much. She’s two years old. She usually comes with me, but this year she didn’t.

Is she a burgeoning fashionista?
Well, she’s still young, but she does sometimes break into my closet and pile everything on at once!