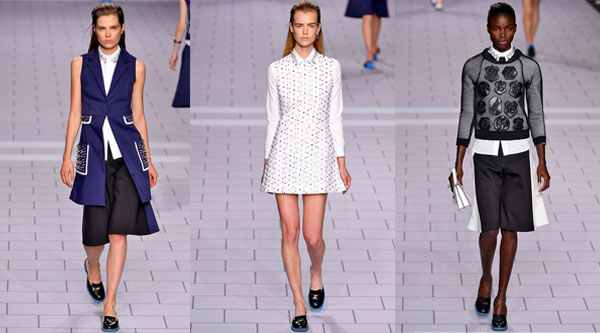 (PARIS) Viktor & Rolf
Editors were taken back to school at Viktor & Rolf this season. The show was held in the Tuileries, where shows have been torturously hot all week, so V&R’s oversized invitations moonlit as makeshift fans pre-show. The backdrop? A huge white brick patterned wall with the brand’s logo on it and as the show began, sure enough, Pink Floyd’s The Wall provided the soundtrack to the show alongside a rendition of Britney Spears’ first hit “Hit Me Baby One More Time”.  What ensued was a rigorous collection of clothes with a dose of rebellion mixed in. As Viktor Horsting and Rolf Snoeren put it post show, “It was about uniforms, but personalized uniforms.” In other words, it’s what happens when schoolgirls end up redesigning their own uniforms for the sake of individuality. There were sweater vests with alma mater patches sewn all over, combined with plaid skirts or pieces like a conservative navy school jacket that had been lopped off on one side for a one-shouldered effect. There were plenty of flared culotte shorts avec long vest dresses and white button downs underneath, plus mixed materials like half of a black jacket sewn to a grey jacket and worn with matching two-tones culottes as though the V&R girl had combined one uniform with another. Some of the pleated skirts were standouts in their extreme exaggeration, which was in tune with the less commercial Parisian take on the pervasive trend. And then, there were short school girl white collared dresses that were studded out for the good girl gone bad look. “In the embroideries especially, there is a rebellious attitude for instance there is a broderie anglaise, which is sort of a symbol of innocence that’s studded,” added the design duo. “Then there’s a men’s check that’s embellished with safety pins and studs and that kind of thing.” But while Horsting and Snoeren might be rebellious in their designs they both admitted they were actually “very, very good” in school. Why are we not surprised?

Maiyet
The socially responsible brand got a revamp this season! Maiyet is dedicated to maintaining the craftsmanship of artisans around the world by employing craftsmen everywhere from Cambodia to Indonesia, Mongolia, and Peru among others. Partnering with the non-profit Nest they work on promoting entrepreneurship in developing countries through craft. Like Ali Hewson’s Edun being helmed by new creative director Danielle Sherman, Maiyet has taken on a new creative director in Kristy Caylor and like Edun’s Danielle Sherman, Caylor is proving equally as capable of putting a charitable brand on the fashion map. The collection was inspired by The Cotton Club in Harlem circa the Thirties (and, specifically, the heat wave of 1936). Held during a misty eve in the courtyard of the École des Beaux Arts, everything was light as a breeze—just what you want in the blistering New York summer heat, non? Colors were mostly soft in pale baby blue, peach, and yellow. A beautiful sheer pleated flutter-sleeve shirt with a matching maxi skirt that overlaid a pale blue mini skirt beneath. The fabric consisted of a faint yellow bird print in hand block batik on silk that was done by artisans in Indonesia. A white sleeveless assym shirt dress with a drawstring drop waist that opened the show was exactly what you’d imagine wearing on a balmy summer day. Another short drawstring mini dress was printed with the repeating phrase “No goats on the loom”. The meaning? That phrase was apparently taken from a story from the brand’s weavers in Varanasi about a rogue goat that barged in interrupting their production. Plus, the ancient technique of Shibori dying was incorporated into airy slip dresses. It’s details like these mixed with Caylor’s soft sensual designs that will make these pieces covetable.

Kenzo
Carol Lim and Humberto Leon have that certain je ne sais quoi when it comes to branding and just generally being perpetually hip. Last season’s “seeing eye” print has been one of the most pervasive prints we’ve seen here at Paris Fashion Week. It seems like just about everyone latched onto it and it’s been popping up in pants, shoes, hats, sweatshirts…basically, anything you can think of. Before that, it was the tiger—and this season it’s the fish. “Carol and I have taken a lot of photos of people wearing it,” said Leon of the seeing eye print. “We get really excited to see people in our stuff. The one thing we promised to give this house was some really great new codes to live with, and we’re building this library of icons for the brand.” Quite smart. This duo’s penchant for cool is what gives them the ability to hold a show all the way in Saint Denis on the outskirts of Paris at Luc Besson‘s film studio, La Cité du Cinéma, and still show to a packed house. The duo had the detriments of overfishing in mind, which Leon said he’d been thinking about since watching some of Jacques Costeau’s son’s documentary series about it on CNN. Thus, the fish and water themes. The fish pattern came most blatantly on a black pant suit, a black shirt dress and matching jacket, and a mini shift dress. Those will certainly be seen everywhere come February. Other projected must-haves? A water-patterned, blue and white tunic top worn with a matching double slit skirt, or a crop top and skirt cut in a wave pattern. And the B&W numbers that opened the show, such as a bandeau top with white tabs and a pair of black fisherman crop pants with white rectangles, will be easily recognized on the street as being distinctly Kenzo. The thing about Lim and Leon is that they manage to have their cake and eat it too: they create buzz through branding, but they also create beautiful clothes that people really want to wear. Somehow it all balances out perfectly.

Vivienne Westwood
At Vivienne Westwood’s show at the Sorbonne on Saturday, it was quite a rush at the door and it became even more frenzied when last minute arrival Pamela Anderson showed up causing a veritable mosh pit of photographers falling all over each other to try and get their shot of the diminutive diva as she was briskly ushered in to her seat. Meanwhile, guests awaited the show to start in a marble floored room with iron and glass vaulted ceilings. One thing is for sure: there’s no lack of beautiful show spaces in Paris! Backstage, Westwood cited pilgrims during the Middle Ages as a theme. “I don’t believe in God, but it was very expensive to make these religious pilgrimages back then and I got to thinking about what they might wear,” said Westwood. Mix that with Nymph-like goddesses and you have one of Westwood’s wildly imaginative collections. There were all kinds of pilgrims, like a goddess in a pale pink draped Grecian gown to a shepherdess carrying a crook herding stick in a ruby red three-quarter sleeved gown that was unfinished at the hems to signify her arduous journey. An asymm multi-colored one-shouldered dress with a graffiti floral print was worn over matching leggings and knee-high sneakers on a model sporting a wreath made of leaves and carrying a bow and arrows. A Chinoiserie traveler wore a mandarin-collared navy skirt suit with a black and white printed dress shirt underneath and a straw hat. We felt as if we had stepped into a painting at the Louvre after it’d been splashed with Westwood’s punk aesthetic.

The Editorialist's Kate Davidson Hudson On Motherhood And More