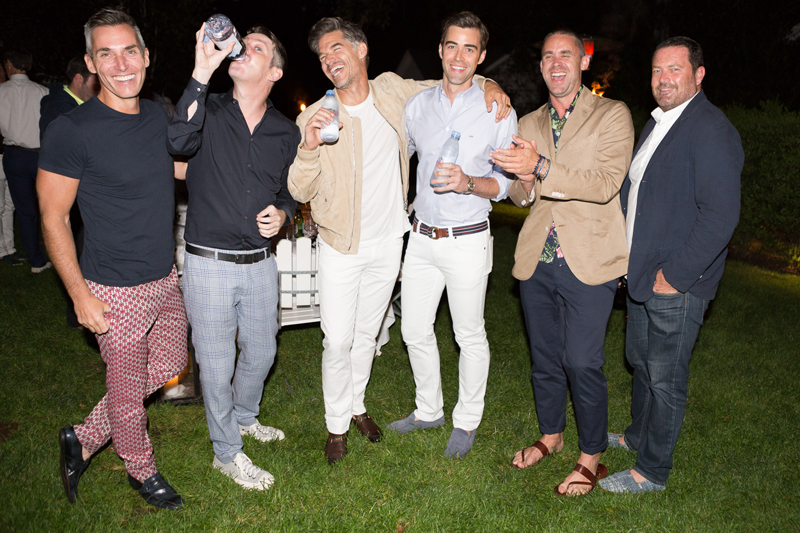 The first annual Boys of Summer event at c/o The Maidstone was on the books long before the SCOTUS gay marriage ruling, but it gave one more reason for the Hamptons’ most stylish gents to celebrate on Friday night. The intimate dinner was hosted by Condé Nast Traveler publisher Bill Wackermann (wearing Mr. Turk pants) and The Daily Summer, to celebrate four men with impeccable style. So, who made the inaugural list? GQ‘s Bobby Graham, Corcoran Group’s Noble Black, event planner/model/America’s sweetheart Eric Rutherford, and Men’s Style Guide founder Greg Tinari. What’s Wackermann’s definition of a stylish lad? “Style comes from confidence, from feeling comfortable in your own skin, and from knowing what looks good on you, and then pushing the boundaries.” One look you’ll rarely see him in during the summer months is all black, he tells us. A summer essential in his Sag Harbor closet? “I know white pants have become sort of a cliche, but guess what, they work. So, I probably have about 8 pairs.”

The sit down dinner at the Living Room restaurant in c/o The Maidstone’s garden also welcomed Joseph La Piana, Matt Albiani, Jack Pearson, Fiona Byrne, Marc Rozic, Tucker Gurley, Marshall Heyman, Ben Maddox, and Lynne Bredfeldt, with live jazz provided by Jazz Acute Inflections‘ Elasea Douglas and Sadiki Pierre. (Look no further than those two for entertainment at your next party.) Amagansett’s Flowers by Beth provided the florals, and drinks were courtesy of Cointreau, Peroni, Rioja Wines and Evian. Guests went home with treats from Moroccanoil, Boots Cosmetics, SHAN Swimwear, and Serena & Lily, but not before toasting the momentous SCOTUS ruling with a vanilla rainbow-colored cake. A supreme day, indeed.

The boys with Acute Inflections