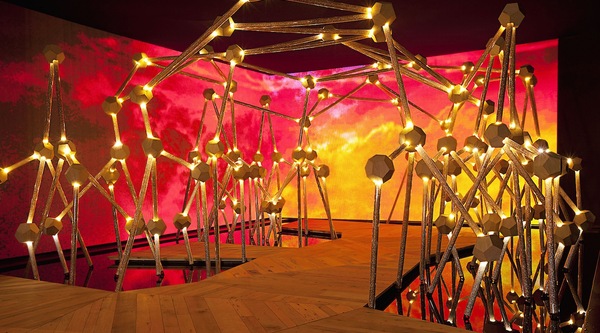 (NEW YORK) For Swarovski’s 11th annual Swarovski Crystal Palace at Miami Art Basel, the brand has collaborated with acclaimed Brazilian architect Guilherme Torres of Studio GT to create an installation titled Mangue Groove, which is inspired by water conservation. Water is used in the crystal-making process and the Swarovski Waterschool, which was created in 1999, will expand to Brazil next year in an effort to teach school children about water conservation.

For its sixth consecutive year, Swarovski Crystal Palace is sponsoring Design Miami, where Torres’ instillation will be revealed tomorrow. The installation is not only inspired by water conservation as it rests on top of a shallow pool of water, but also by the mangrove forests of Torres’ native Brazil and the Voronoi diagram (in which space is divided into a number of cells with corresponding focal points). The piece is meant to explore the balance between nature and science and incorporates Swarovski’s lead-free Advanced Crystal that fill the synthetic tubes that make up the geometric figure, which are then lit with energy efficient LED lights. Visitors can peruse the structure by walking along a path of reclaimed wood that is canopied by the Voronoi-like structure. The installation will also incorporate light and sound by mixing light patterns and sound recordings that will vary in movement and tempo to reflect symbols of an Amazon sunset, which will be displayed everyday at 5:00 p.m.

Prior to Torres, Swarovski Crystal Palace has worked with art and design luminaries such as Zaha Hadid, Ron Arad, Tom Dixon, Yves Béhar, and Tord Boontje, to name a few. The project was founded in 2002 by Nadja Swarovski and has served some of the best creative minds with the ability and materials to create new masterpieces within the boundaries of design, art, architecture, and technology. Torres’ take on the Swarovski Crystal Palace will be on display through December 8th at Design Miami.