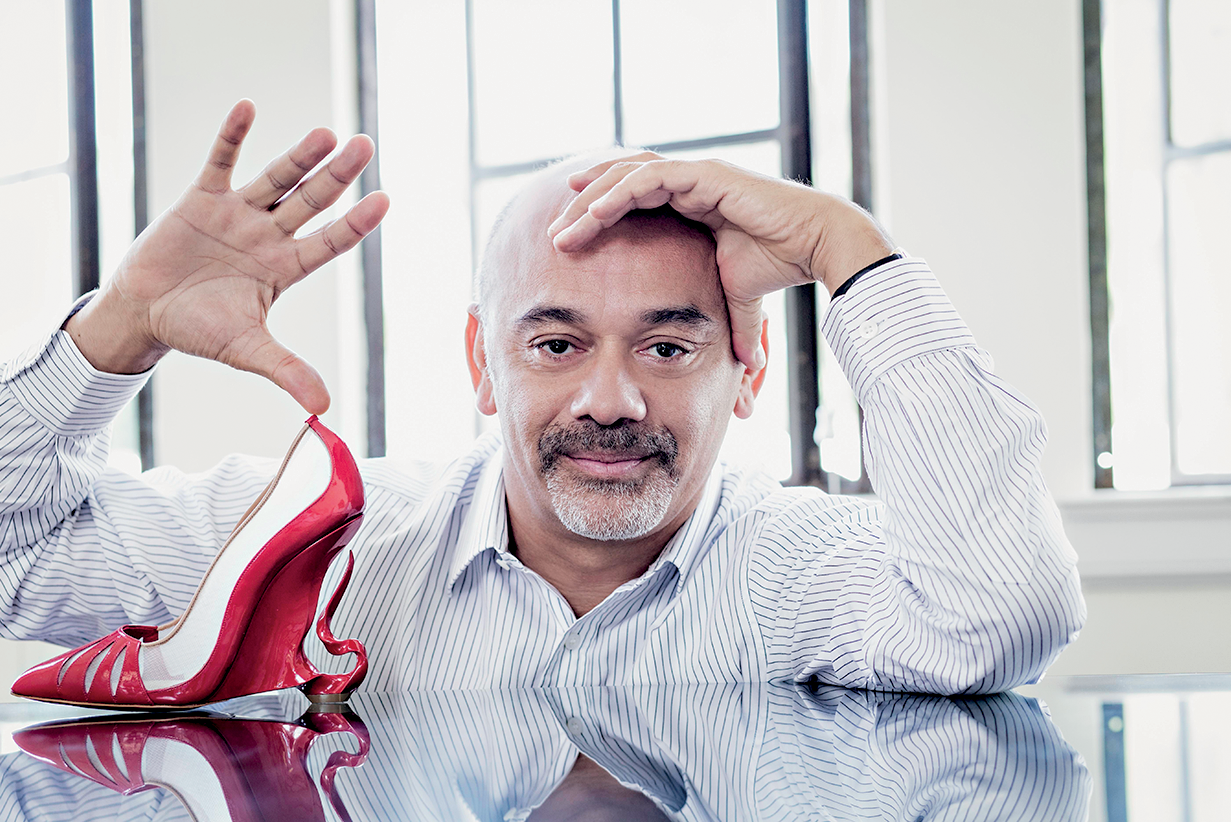 Fresh from the pages of The Daily’s special Hollywood issue, and just in time for tonight’s inaugural Fashion Los Angeles Awards… Bona fide shoe god Christian Louboutin continues to take over the planet with the launch of his eponymous beauty line (the nail polish bottles are shaped like a sexy spiked heel, bien sûr) and the opening of his 100th store, which is devoted to the brand-new and ever-expanding beauty collection. And did we mention that he’s now in the hotel business?

Congratulations on the launch of your beauty collection.
It was big. I have been working on beauty for three years, and I just opened the first beauty store in Paris. Last year we opened 10 other stores. We have exactly 100 stores now.

Are you ever not on a plane?
I don’t necessarily fly just to visit stores. For instance, I’ve never been to the store in Chicago. I only recently went to Singapore to see the store and it’s been open for five years. But it does give me an excuse to see places. We have a store in Vietnam and I went to supposedly visit the store, which took me half a day, but then I stayed in the country for 10 days. The majority of my year is spent between Paris and Italy, where my factory is located. I’m sort of spinning around among Paris, Italy, Egypt, Brazil, Portugal, and the west of France, where I have a house. I go to these places to design different collections.

Rappers, football stars, and fashion guys love your men’s shoes. You once told us that you would never design for men. What happened?
It arrived by accident. This young pop star named Mika called and wanted me to do the shoes for his tour. I thought of show guys in the way I think of girls as showgirls and it made sense. In every man, there is a showman. Suddenly, with this in mind, it became very simple. I did a lot of shoes for Mika, and then I had an entire collection. I put it out there and it did very, very well. A lot of music and sports people were my first customers.

Hollywood adores you. Do you adore Hollywood?
I do like Hollywood. To me, it is extremely exotic. Some cities are very international, but Hollywood is very concentrated on Hollywood. Hollywood is very self-centered, but it also pays attention to what is happening in the world. I like that mix of misplaced seriousness and complete frivolity.

Every designer wants Louboutins, and you collaborate with cool young fashion houses like Rodarte. You must have to say no a lot.
It’s not hard to say no, and it’s not always no forever. It’s often just a matter of time. I mostly favor people who are just starting out. A good shoe is really going to help the silhouette of their design. When I started my company, I was helped by a lot of different people, so I think it’s nice to help when people are starting their own things. I’m very detail-orientated. When I collaborate on a show, I have to put myself in a different frame of mind. I never think of clothes when I design shoes. I always draw shoes on a naked girl.

What have you got cooking in 2015?
In personal matters, a lot. Otherwise, I’m building a hotel or two. One is a beautiful resort in the Maldives. Another is in America, and a third is in Portugal…very exciting.

The beauty line, shoes, bags, and hotels…welcome to Le Monde Louboutin!
I’m not a control freak, but I like to manage things from the beginning to the end, so it all takes me time. I can’t do everything. At this point, I’ve been asked to design cars, couches, clothing, even a fashion couture line. Nothing really excites me there. But there are things that totally make sense for me, like beauty. It needs to be connected to what I am doing at that moment. It’s often a happy accident. It’s been 23 years since I started my company. When I first designed a shoe, I had one store and I was very happy. Then it made sense to have a second one. But I didn’t think I would have 100 stores 20 years later. For me, not projecting into the future reminds me that I have no limits.

PLUS! Fashion Heavyweights On The Power Of Louboutin:
Diane von Furstenberg: “Christian is my brother, my friend, my travel companion. He is talented, has more vital energy than anyone, is curious and loves life! He has an incredible eye and is a true artist.”

Rachel Zoe: “Christian has always stayed true to his vision and never sacrificed his integrity as a designer. He is one of a kind, and his red sole will live forever.”

From The Daily’s Hollywood Edition: Jeremy Scott, Womenswear Designer Of The Year