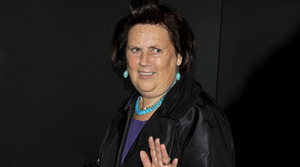 (NEW YORK) Suzy Menkes is making the jump from newsprint to top-notch glossy, thanks to her new role as international Vogue editor at Condé Nast International. Menkes spent a quarter-century as style editor at The International New York Times (formerly The International Herald Tribune, before its rebranding in October 2013). The respected fashion voice’s accolades include a Legion d’Honneur in France as well as a British OBE.

In her new gig, for which she’ll be based in London, expect to see Menkes’ presence on all of Vogue‘s sites outside the U.S. Menkes will serve as a reporter and fashion critic online for the mag’s international editions (save for its American edition). She will also reportedly host an event chez Condé that will be similar to The International Herald Tribune‘s luxury conference she hosted for the paper. That event will go on sans Menkes, as of now, in Miami on December 2nd and 3rd.

“I’ve been so happy for so many years at The International New York Times, but you know, there’s nothing like change. Fashion is all about change,” Menkes told Business of Fashion today. “So, the fact that Jonathan Newhouse has given me this chance to take my skills to Condé Nast, I think it’ll be very exciting for me.”

Menkes is now the third big name to bid adieu to The Times‘ style section over the past six months. Eric Wilson decamped from his fashion critic and reporter capacity in October for the newly-created title of fashion news director at InStyle. In January, fashion editor Cathy Horyn left the Grey Lady as well for personal reasons.

“Suzy Menkes is a unique talent, with superb judgment about fashion and keen insight into the business behind it. She is hugely influential and respected,” said Condé Nast International’s chairman and chief exec, Jonathan Newhouse, in a statement.

Menkes’ start date has yet to be announced; no word yet on the seasoned fashion critic’s successor at The International New York Times.
ALEXANDRA ILYASHOV