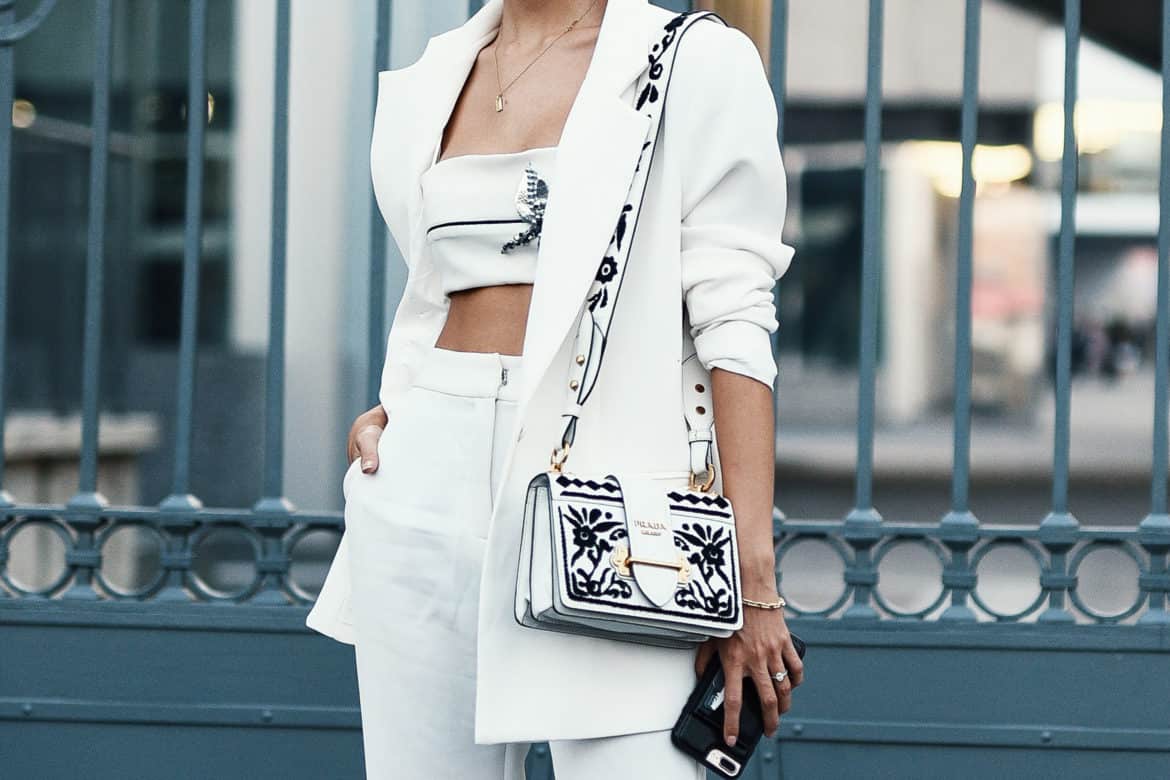 The Daily Front Row‘s perennially chic correspondent Sofia Achaval de Montaigu is soaking up the glamour in Milan. She fills us in on what’s happening in the Italian capital during the MFW Spring Summer ’22 schedule.

The day began with Missoni’s show, the first collection directed by Alberto Caliri. The event took place at a great hall, a former plant, with industrial-style windows and mirrors that hung from the ceiling. It was an undoubtedly ’90s-inspired collection—and the ones that stood out the most were the sexy looks. Those included a mini skirt and a bandeau top that left the torso bare, dresses and bathing suits with asymmetric necklines, and strappy high heels sandals. Georgia May Jagger caught everyone’s eye on the runway, while front row stars like Row Raco and Esther Acebo shined.

Mr. Armani, who was celebrating his 40th anniversary in business, held his show (fittingly!) at Armani/Silos: the art
and fashion museum dedicated to Armani. The line paid homage to the brand’s style over the years, with youthful and urban looks for men and women, and patchwork items for the former and dark-colored suits for the latter. Silk made an appearance—via mini dresses, jackets, and loose pants—while pastels and vibrant colors stole the show later on. Among the widely-attended gathering were the singers Niall Horan and Becky G.

The MM6 Maison Margiela collection, presented at La Belle Aurore Bar to a soundtrack comprised of a mashup of jazz and classical music, saw audience members enjoying snacks, aperitifs, and amazing desserts. Without a doubt, the first look was one of my favorites—consisting of a tailored white suit with a checkered shirt and square-toed shoes. It made for a very sophisticated and fun outfit. Long gloves and ruffled necklines completed the looks, among the many checkered items. The muses that inspired the collection included Claude Cahun, Leonora Carringtone, and Dorothea Tanning.

Without a doubt, Prada’s show was one of the most innovative ones: it was presented in Milan and in Shanghai simultaneously and guests could watch what was happening on the other show on large screens. Among the celebrities invited to the show were Shira Hass, Maisie Williams, and Sarah Gadon, who posed together for pictures before kickoff.
The latest collection, co-designed by Miuccia Prada and Raf Simons, was called “Seduction Stripped Down”, and that’s exactly what we got. Besides some bare torsos that were covered by open leather jackets, we could see corset-style sweaters and dresses that, even though they appeared modest, came with zips undone. One of my favorite looks was an orange mini-skirt, a gray sweater, and a red bag modeled by Mica Argañaraz. The offering had no shortage of colors—from lime green, orange, and different shades of pastels to neutral colors, gray, and dark blue.

Versace’s show was, for sure, the best people watching ticket. Walking the runway were Dua Lipa, Naomi Campbell, Emily Ratajkowski, Gigi Hadid, and Lola Leon, to name a few! The collection showed a bright color palette from start to finish. Dua Lipa, who opened and closed the show to the beat of her own songs, wore a sexy blazer and a black cut-out skirt at the beginning and a bright pink chainmail ensemble towards the end, as she joined Donatella Versace for her bow. Neon colors were everywhere: in the prints, including the brand’s trademark Greek Key motif and Medusa image, the makeup, and the accessories that the models wore.

The designers presented their Spring Summer collection, called “DG Light”, at the Metropol Viale Piave. The show had a nightclub vibe, due to the big mirrors that acted as a curtain and the lights that accompanied the models’ walk. The overcharged and 2000s-inspired designs included lace-up details, embroidery, animal prints, and corsets. Some of the garments that stood out the most were biker and camouflaged jackets, as well as cargo pants and blouses. Without a doubt, the most striking look was a top with enormous sleeves, paired with jeans. Chokers accompanies all of the looks, while the models’ loose hair brought a relaxed edge to the show.

Marni’s show took place at Milano Lambrate. Singers, musicians, and a chorus acted as a crucial part of a performance that combined art and fashion, with models walking in circles to the beat of live music. Eccentric outfits included stripes, flowers, and colorful prints, with many guests wearing equally as fun and beautiful hand-painted, custom-made clothes from the brand.