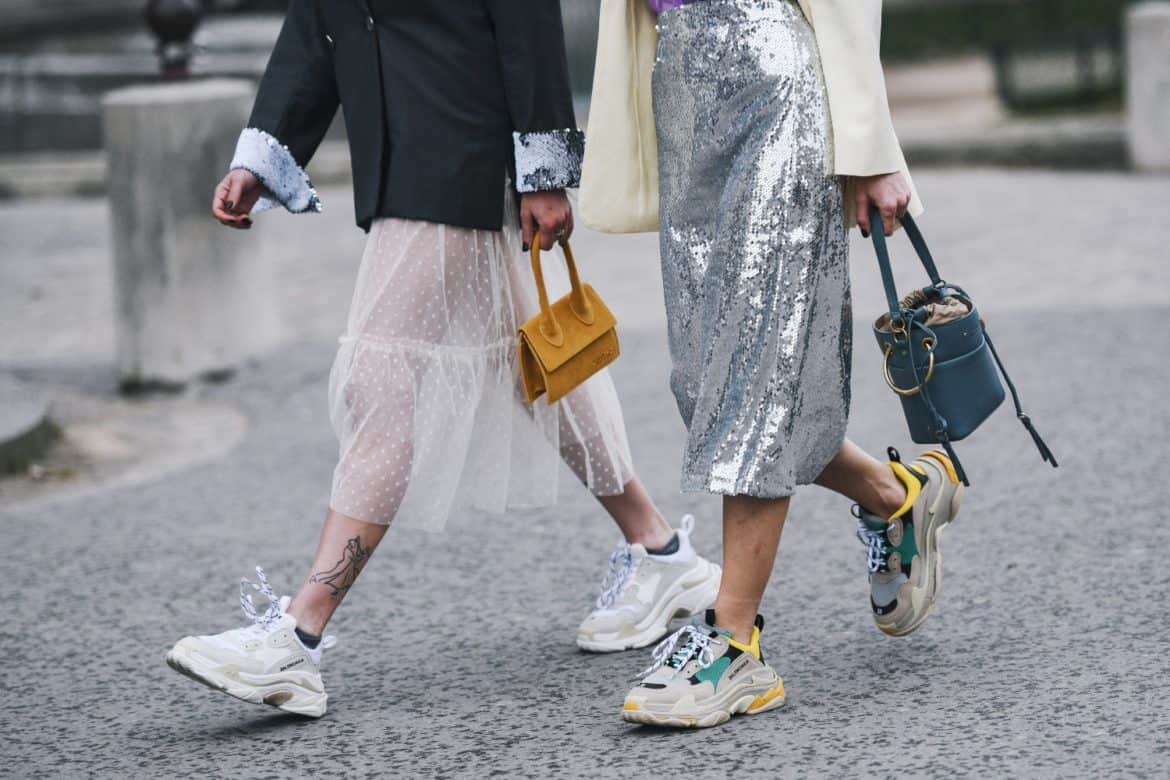 The Daily Front Row‘s perennially chic correspondent Sofia Achaval de Montaigu is soaking up the glamour in Europe. Below, she fills us in on all the highlights and the unforgettable moments that took place during Milan Fashion Week Mens.

Matthew Williams’ brand Alyx made its debut at Milan Fashion Week Men’s with a collection titled Fade. Presented at a majestic old Italian church, Wake Up f1lthy was in charge of the music. The tailoring was the star of the show: trousers were worn alongside patent leather vests while maxi coats were accessorized with ski-masks. Lavender and green sunglasses also added to the futuristic impact, all of it chosen by stylist Lotta Volkova. While black was the basis for all of the looks, it was complemented by softer hues like bordeaux, brown, and different kind of greens. Sheepskin, leather, net, and feathers were repeated throughout the line, while knitted fabrics mixed with unexpected combinations of natural and synthetic materials were strong. In terms of the shoes, 1017 ALYX 9SM introduced a new version of their Mono boots with an exaggerated silhouette that are bound to be popular.

At the old Metropol cinema, lights covered 30 meters of its surface while big screens hung from the walls and presented graffiti-like drawings. Sitting front row was actress Megan Fox in a lace bodice and a crystal choker. She was there to cheer on her new fiancé, Machine Gun Kelly, who opened the show and went through three outfit changes while he danced and sang his way down the audience. The LED light-filled runway, which took 8,000 hours to create, contributed to the futuristic vibe and became home to the designers’ colorful silhouettes, oversizes accessories, tailored staples, and textured pieces in leather and teddy-style fabric.

Fendi’s men’s fashion show took place at the Labirinto Arnaldo Pomodoro, where an F-shaped silver runway acted as the stage and backdrop for a collection inspired by the ‘20s. Singer Mahmood and actor Simon Rex sat in the first row, catching everyone’s eye. The designs were elegant and sophisticated from beginning to end; executed in a neutral color palette that included colors like beige, black, white, brown, and red. The collection oscillated between feminine and masculine thanks to impeccably-tailored items like wide leg trousers that looked like skirts from the back. But without a doubt, there were two main character looks: a matching black set of trousers and a cropped blazer completed by a delicate necklace, and an off-white knitted set with an exagerrated neckline. Lastly, the detail that stood out the most for me were the earrings designed by Delfina Delettrez that carried a single pearl.

Prada’s show was a true sight to behold! Actors like Asa Butterfield, Jeff Goldblum, Kyle MacLachlan, and Louis Partridge certainly won the olive green-covered runway at Fondazione Prada. The cinema-like seats were positioned so the actors and models could walk in a zigzag between the audience, which included Noah Beck, Mahmood, and Blake Gray. One by one, the actors came out of a lit tunnel wearing the latest collection created by Miuccia Prada and Raf Simmons. In addition, there was a camera flying over the venue that created a futuristic ambiance. While Jeff Goldblum had numerous iconic style moments throughout his career, on and off screen, this leather black coat he wore caught everyone’s eye! Uniforms were the main theme and were reinvented in a very sophisticated way. Working clothes like overalls were seen in mustard patent leather, while extra large bomber jackets were tight at the waist. Gloves completed the looks, adding hints of color in most cases. The body, the shoulders and the waists were highlighted through traditional tailoring and this was reflected in a silhouette that will then be translated into day to day items. Lastly, black boots with square toes brought strength to the models’ walks.

Kway presented its Fall Winter collection at the Talent Garden Studio, where two white platforms acted as the runway, decorated with yellow details. Surrounding the platforms were blue, red and yellow cubes where personalities like Gianmaria, Davide Moccis, Eddy de Pretto, Rachi Chadda, and Jack Savoreti sat. The collection had a sporty but elegant vibe, and it was composed of youthful and voluminous silhouettes. Knitted items and enormous scarves stood out, each made following sustainable practices, while puffer jackets, matching sporty sets, and sweaters also went down a treat.

Watch The Dior Men Winter ’22 Show Live From Paris Here At 8.30AM Tomorrow