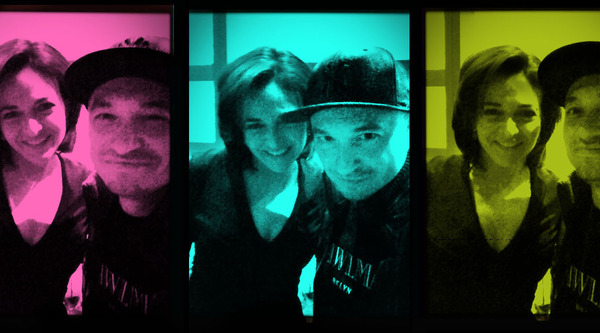 Hanging with everyone from the Facebook dynamo beyond that Lean In phenom to boss Joanna Coles’ pooch, plus music recs for days? Yep, just another week avec Cosmo‘s Sergio Kletnoy!

Monday
Even if you tried really hard, you couldn’t escape Sheryl Sandberg in the last few weeks! She’s literally everywhere, running neck and neck with the Pope for the insane amount of media coverage: GMA, Katie Couric, 60 Minutes, cover of Time and of course editing Cosmo’s first ever Careers supplement. Her new book, Lean In, is the talk of the country, and due to JoCo’s friendship with Sheryl I feel like once again I’m inside the circle. This afternoon I was invited by Sheryl’s amazing assistant Camille for cocktails at Landmarc (which was hand-picked due to my rave reviews of their Bloody Mary) with Sheryl’s small group of friends. Without hesitation, I dropped everything I was doing to sip on my fave cocktail and hang with Facebook’s leading lady. My friend Melissa (Bieber’s publicist) and Abby (Cosmo’s social media genius) came along for the ride. Not only did we get one-on-one time with Sheryl, but we also spend time with her parents Adele and Joel Sandberg, discussing music, parallel lives of Sheryl’s assistant and myself, parental advise to children and of course my tattoos. Inspired by Sheryl’s message, Abby, Melissa, and I decided to start our own Lean In circle and organize monthly dinners with creative folks in the entertainment biz. Don’t be upset if you didn’t get an invite, the next three dinners are already booked up, so be patient, you’ll probably get on the list…At some point…Maybe…Maybe not!

Tuesday
Day started with JC on CNN barking at Carol Costello; they were discussing women and work and JoCo was leaning right in. Followed by six back-to-back meetings, two conference calls, three fashion run-throughs for upcoming stories, and an interview with Anderson Cooper. In between, I rushed off to the Coles castle to oversee the repair of her dishwasher. Yes, my life is glamorous, fabulous, and unpredictable. And that’s what makes it all worth it! I probably could’ve fixed that dishwasher myself, but taking a breather on the couch with JC’s dog Phoebe while watching Animal Planet was exactly the break I needed. Plus, I managed to get back in time for Anderson Cooper 360. You didn’t think I would miss the interview with Madonna’s fave TV host, aka Silver Fox, did you?

Wednesday
Working with Joanna is similar to that of playing the game of Secret Santa. You never know what you might get and what’s going to happen next. Today, Gabby Giffords and her husband Mark Kelly came to the office for a Q&A. Their incredible story needs no introduction, but hearing it directly from Mark and Kelly made me sob like a little girl, in fact there wasn’t a dry eye in the house. Gabby’s spirit and passion is infectious and together they are true American heroes. Everyday I realize how lucky I am to live in a world where people are willing and able to engage, provoke, touch, affect and stimulate. Queue Patti Smith’s “People Have The Power”…

Thursday
Big day! Huge! Camera crew’s filmed everything on today’s calendar for a BIG profile on THE BOSS. I might even make a cameo. That’s all…

Friday
Obsessed: “Entertainment” by Phoenix; “Attracting Flies” by AlunaGeorge; “Statues” by Nina Nesbitt; “Save Me” by Bo Bruce; “Chez Keith At Anita” by Carla Bruni; “Lay Down In Swimming Pools” by Mutya Keisha Siobhan; “22” by Taylor Swift and “Problem” by one of my fave bad girls, Natalia Kills! You need all of these! TRUST! I’ll be back next week, until then I wanna know what music you’re listening too, so be sure to tweet me at @SergioKletnoy.

Alison Brod Gets Into The Burger Business