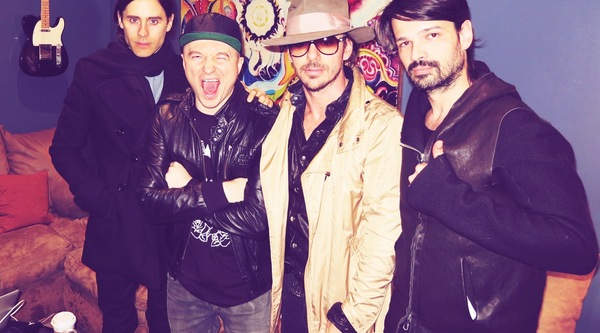 Cosmo‘s Sergio Kletnoy has been one busy boy this week, between hobnobbing with Jared Leto and Ashley Olsen and tipping back cocktails with the Cosmo staff. Jeals? There’s more!

Monday
After hitting the snooze button on my alarm clock at least a few dozen times, I finally made it into the office at 10:36 a.m. JoCo is at The White House, so I knew my day was going to be free of phone calls, e-mails, or check-ins. This was my time to sit back, relax, grab a Coca-Cola Zero Cherry, and not worry about making 18 cups of tea in-between meetings, conference calls, and layout approvals. For the rest of the day I instructed everyone to call me Bueller. “Yup, I said it before and I’ll say it again, life moves pretty fast. If you don’t stop and look around once in a while, you could miss it.” And I’m not missing it!

Tuesday
A few years back, during my final stint in the music biz at Virgin Records, I got a chance to work with Jared, Shannon, and Tomislav from a “little” known band called 30 Seconds To Mars during their second album, A Beautiful Lie. I remember thinking, “great, Jordan Catalano (if you don’t know this reference I have no love for you) is now a singer.” Let’s add him to the long list: Don Johnson, Bruce Willis, Russell Crow, Kiefer Sutherland, Kevin Kostner, Steven Seagal… Shall I go on? David Hasselhoff, Billy Bob Thornton, William Shatner, Korey Feldman, Kevin Bacon, Keanu Reeves, Eddie Murphy, John Travolta. Okay, I’ll stop. But then I heard The Kill, and suddenly it all made sense. This wasn’t Jared Leto’s hobby or a side project. This was passion and love for music, and the one thing in the world that can bring us all together, no matter what language we speak. Today I got to hang with the band at Jimi Hendrix’s Electric Lady Studio (Patti’s Horses, Bowie’s Young Americans, AC/DC’s Back in Black, and The Stones’ Some Girls are just a few of the albums that were recorded there) and hear new music from Love Lust Faith + Dreams, their fourth album that’s released on May 21st and produced by Jared with four of the 12 songs co-produced by the master Steve Lillywhite (U2, Stones, Morrissey, Dave Matthews Band & Peter Gabriel). I was completely blown away by the cinematic masterpiece! What I heard wasn’t an evolution, it was a full-on attack on mind, body, and soul. I was also one of the lucky few to interview the boys before the event for an upcoming issue. The album’s artwork features Damien Hirst’s “Isonicotinic Acid Ethyl Ester” (2010 – 2011) from his Spot Paintings series, and the single was launched a few days ago into space with NASA. Oh, and did I mention, the epitome of cool – Ashley Olsen – was a few feet away from me during the listening session? Yeah, I’m jealous of me, too. Since the album won’t be out for two more months, you need to get your hands on “Up In The Air,” the exhilarating first single. It’s the ultimate mind-f***, a trip to the moon and back in four minutes and 36 seconds. I don’t smoke, but I was craving a cigarette after the first listen. IT’S THAT GOOD!

Wednesday
Every Wednesday at 6:00 p.m. while THE BOSS is on her 15th cup of English Breakfast tea, Cosmo’s Southwest conference room transforms into party central where the staff gets to unwind and enjoy a cocktail, similar to that on RuPaul’s Drag Race, minus the pink furry box and the Interior Illusions Lounge. Today, reps from Qui Tequila treated us to Tamarind Mint Margarita’s, the rest of the evening was a big blur…

Thursday
While Marie Claire’s Kyle Anderson is enjoying his newfound fame and celebrating finally getting verified on Twitter (remember, it’s lonely at the top!), I am sorting through my mail and dreaming of Kyle in Givenchy. Just a few items that came across my desk this week: Citizens of Humanity magazine (if I’m not in it, I don’t care); Matthew Williamson’s new coffee table book from Rizzoli (stunning!); a Marc Jacobs designed Diet Coke bottle (it would look better with my face on it!); Deutsch Vogue with Tina Turner on the cover (she’s The Best!), See’s Chocolate Candies (from my friend Chanel); Tate’s Chocolate Chip cookies (is cookie a carb?), two iPhone cases and headphones from chicBuds (chic!); Kenya Moore’s Booty Boot Camp workout DVD (that title is suited more for a dirty film); three books – Nice Is Just A Place In France, What Would Grace Do? and All Men Are Jerks (are these available on CD?); two nCipio hot pink & blue iPhone cases (LOVE!), Issey Miyake’s L’eau Dissey Pour Homme Summer cologne (Yum!); Eat Whatever 2 Steps To Kissable Breath kit (useful); 36 CD’s for reviews (not enough hours in a week); a nude print of a couple fornicating (if it isn’t a naked celeb I’m not interested); and Salma Hayek’s new beauty set (cleanser, mask, moisturizer, pads & blotting papers) packaged in a glass box with flowers and lemons (anything Salma touches is gold)… And since I’m not a hoarder, one of these has Kyle’s congratulations gift written all over it!

Friday
Obsessed: “Step” by Vampire Weekend; “Fall Over” by Banks; “A Tooth For An Eye” by The Knife; “Gangsta” by Kat Dahlia; “Broken Record” by Little Boots; “Mirrors” by Justin Timberlake; “New Town Velocity” by Johnny Marr; “I Wish I Could Tell You” by Chloe Howl and “Sun” by Belinda Carlisle.