Sergio Says! Musings From Cosmo, Seventeen, And Beyond… 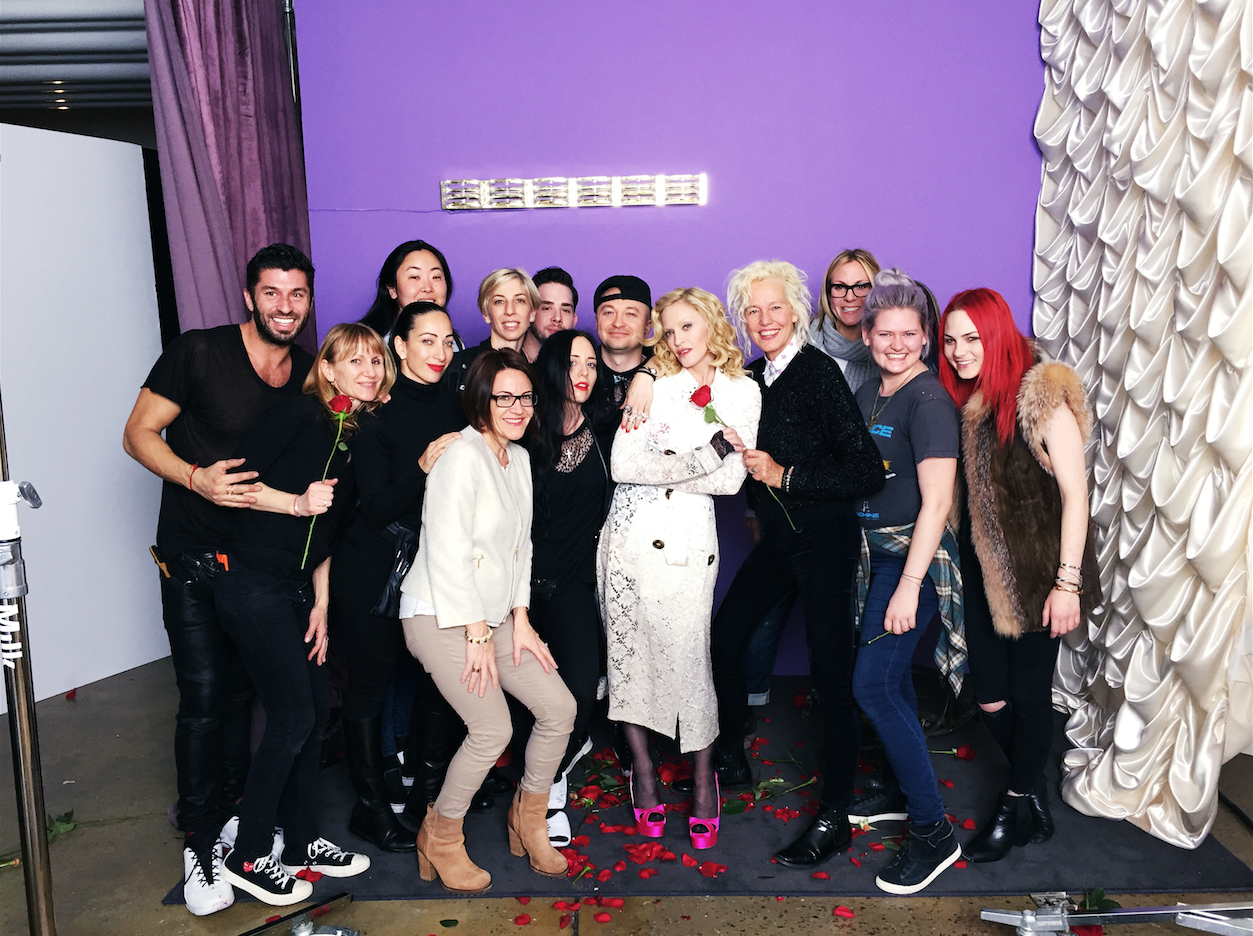 Have you dearly missed your dishy recap with Cosmo and Seventeen‘s ever entertaining Sergio Kletnoy? Us too! Luckily, he’s back with a lengthy read today. So sit back and enjoy the ride…

“If you can dream it, you can do it” is one of my favorite Walt Disney quotes.To which I always add “And if you fail, at least you’ll have a good story to tell.” I’m saving the juicy ones for my book and yes, there is a title: Trials and Tribulations From an Almost Singer, Dancer, Actor, Tea-Fetcher and Part-Time Communist. It’s copywritten, so don’t even try to snatch it!

But back to dreaming! As a kid, I dreamt of becoming a singer, but my voice failed me. Then a dancer! I came, I saw, I cha-cha’d a little, and then I got bored. Then an actor, until I realized how much patience it takes, so that dream was over before it even began. I dreamt of meeting Madonna, who I idolized ever since I was a baby-communist back in the former U.S.S.R. One out of four of my dreams came true, which is pretty good if you ask me! So when the time came for Cosmo to chose THE cover girl for our 50th anniversary issue, only one name came to mind – Madonna. She’s the epitome of brains, beauty, and power. She’s ruffled all the feathers, pushed every button, and continues to break rules. Last time she graced the cover of our mag was exactly 25 years ago in May 1990, which was also the 25th anniversary edition.

Madonna confirmed a date, photographer was chosen and when M’s stylist B. Akerlund arrived at the office to go over the looks, I knew this sh*t was getting real! A week later we all arrived at the Milk Studios in Chelsea, popped endless bottles of Krug Rose, turned up the beats, and went to work. Madonna danced, sang along to her favorite tunes, and posed like a goddess in front of the camera. A month later JoCo and I arrived at Madonna’s compound on the Upper East Side for an interview. We walked up the stairs to the living room and landed on her MADgesty’s couch. There was no turning back. Months later I’m still sweatin’ and trying to regain my composure. You can read the full story in our May issue, featuring four iconic covers shot by Ellen Von Unwerth with an interview by JoCo and I. Oh, there’s also a first time ever Madonna approved behind the scenes video and the only way to get all 4 covers is at www.cosmopolitan.com/madonna, so giddy up!

Years after working as a DJ at my local college radio station (what up WARY FM), I went back behind the mic once again for a weekly guest stint at OutQ Sirius XM radio with my friend Dina Delicious and the hosts Larry Flick and Keith Price. Every Thursday at 9 a.m. we dish all things RuPaul Drag Race. Everyone who knows me is aware of my obsession with the best hour on television. It’s funny, clever, and more entertaining than all the Housewives! I must admit, I’m damn funny and although I was born for the big screen, I’ll settle for radio, at least until my book is published.

Next up, Unitard, which is an insanely funny sketch comedy show about our pop culture obsessed society. It’s a must-see and you can catch it at the legendary Stonewall until the end of April. I went the opening night and ended up sitting next to Debbie Harry. And if it makes Debbie laugh, you know it’s worth seeing. A week later, Debbie and I met again, this time at her own glorious show at The Carlyle Hotel. Ms. Harry performed all of her solo classics and she was flawless. Director extraordinaire John Waters sat at a table next to me. I worship the ground he walks on and when I witnessed him telling off a bunch of people about texting during the show, I almost got on my knees and kissed his pinky ring. Almost… If you don’t know John (Female Trouble, Serial Mom, Hairspray, Polyester, and Cry-Baby to name a few) we cannot be friends! Oh, and if Ms. Harry ever comes back to The Carlyle you should run not walk to see her.

A few days later I was in my extra legroom seat on a JetBlue flight to L.A. for two major cover shoots, one for Cosmo and the other for Seventeen. I can’t reveal anything else or The Boss will un-knight me from my new position as music and entertainment editor for Cosmo and Seventeen, and make me fetch her tea again… Ain’t nobody got time for that! See, not everything is fun and games, I do work!

Upon my return I caught one of my favorite Brits, Marina and the Diamonds at The Bowery Ballroom for her first of many sold out shows, along with country music’s ballsiest babe, Miranda Lambert. Both Marina and Miranda were spectacular and if you get a chance to catch either of them live you’ll have a blast. You didn’t know I can switch from pop to country without skipping a beat, now did you? I’ve been humming Marina’s latest masterpiece “Forget” and Miranda’s anthem “Little Red Wagon” for the last two weeks and I’m not sorry about it!

It’s been a long month, and of course there were a few celeb run-ins… First I stopped by the fantastic new Chef’s Club on Mulberry Street to congratulate Hilary Duff on her Darren Star-created series Younger, about a single mother who tries to get back into the working world. I’ve seen the full season and it’s hilarious. When Duff needed her shoes shined on the set during our last cover I obliged and we bonded. I think. Maybe. Ok, ok, she’s a friend in my head. Next up teen power couple CoGi aka Cody Simpson and Gigi Hadid, who came by the office to play me some of Cody’s new music. When Simpson whipped out his guitar and began playing his new single “Flower” the girls in the office lost their minds! If only I could sing, my life would have been so much different… And lastly, I went to dinner at Indochine with a few friends when I spotted Patti  “Broadway Legend” LuPone. I literally screamed inside, it was exactly like that scene from Will & Grace when Jack had his own run-in with LuPone… I wanted to climb over tables, people, and plants to get to her, but I didn’t want to risk the chance of getting banned from the restaurant. Here’s hoping there will be another LuPone/Kletnoy encounter, so don’t cry for me Argentina…

My cherry on top came courtesy of Relativity Studios and The Cinema Society hosted screening of Desert Dancer at The MOMA starring Freida Pinto and Reece Ritchie. The inspiring film about a group of dancers in Iran who risk everything to start an underground dance company amidst their country’s politically volatile climate and the nation’s ban on dancing. Through banned online videos, the group learned various forms, techniques and styles of dance from timeless legends who cross all cultural divides – Michael Jackson, Gene Kelly, and Rudolf Nureyev. Sounds unreal, but oh so true. The message is so much bigger than just dancing: we take the freedom to vote, live, and think the way we choose for granted, while people all across the world fight for freedom to make choices and live their lives as freely as we do. It made me cry just a little. The film is beautiful and a must-see, but my real reason for going was that I needed to see the co-host of the screening, Mikhail Baryshnikov in the flesh. After all, I was a dancer once… Memories, light the corners of my mind, misty water colored memories…

“Talk About You” by Mika

“Love Revolution” by Will Young

“Dead Inside” by Muse

“Ship To Wreck” by Florence + the Machine

“All Hands On Deck” by Tinashe

“No Words” by Erik Hassle

“All That” by Carly Rae Jepsen

“Bitch Better Have My Money” by Rihanna

“The Devil’s Gonna Keep Me” by Oyinda

Getting Unlimited Blowouts In New York Is Now An Attainable Luxury, Thanks To BeautyPass