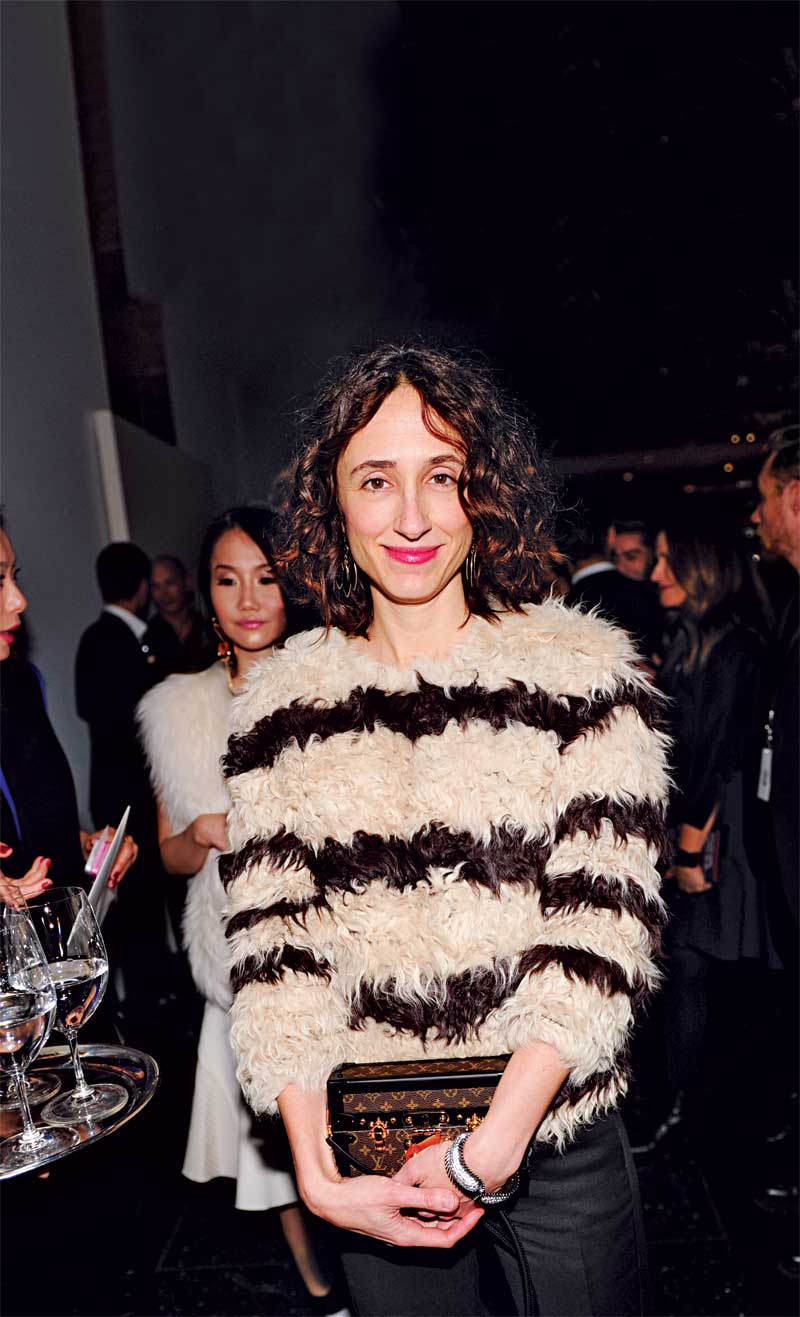 With the media world constantly looking for ways to increase digital traffic, Vogue Runway’s Nicole Phelps is a seasoned veteran at winning the game. After building Style.com into a powerhouse, she’s now showing everyone how to work that runway.

What are the differences between Vogue.com and Vogue Runway?
Vogue Runway is a vertical of Vogue.com where we are focused on fashion and fashion shows. The difference between the fashion vertical and the runway vertical is that on the fashion vertical, you’ll find a celebrity du jour at the airport, whereas the runway vertical is less interested in the lifestyle aspect of fashion than it is in news and newsmakers.

How much content are you posting each day?
The site itself puts up gobs and gobs of content. I work closely with [Vogue.com fashion news director] Chioma Nnadi, who is in charge of the fashion vertical. Between our two verticals, our goal is 20 posts a day. During the shows it’s obviously much more than that. During the New York shows in September, there were over 50 reviews and articles posted each day.

What does your job entail?
The most important thing is to be aware of everything that’s going on in fashion, to the best of my ability. I read a lot of other outlets to make sure that Vogue Runway is covering the news. Day to day, I’m working with the editors on the fashion team and helping them plan out stories and curate their content over the week. We like hard news, and we have a sensational archive of 16 solid years of runway shows and beyond, so we’re constantly dreaming up ways that we can put the archive to use on a regular basis. Beyond that, I write occasionally, although not as much as I would like to.

And then there are the shows!
They now happen almost every month of the year, except for in August and April. Earlier this year, Alexander Fury, a writer for The Independent, joined the Vogue Runway men’s team. I’m hiring and assigning reviewers for all the shows—London, Milan, New York, and Paris. We are also turning an eye to international Fashion Weeks. We did between 10 and 12 or so for the Spring ’16 season—Seoul, São Paulo, Stockholm, Berlin, Copenhagen, Australia, and Russia. We’re thinking about fashion in a global way.

Are American readers interested in those less-known Fashion Weeks?
One thing that is universally successful is street style. Do the fashion shows in Berlin get the same traffic as Paris? No, but there is just as much interest in what the Seoul Fashion Week–goers are wearing as what they are in London or Paris. The traffic for street style is through the roof. People like to see how other people interpret and wear and love fashion in their real lives.

What do you look for in young editors?
Obsession. You need to really love this, because we are totally living and breathing it. This is the Internet we’re talking about, so editors need to be fairly tireless. During the shows, it feels like a 24-hour-a-day operation, and Twitter and Instagram have changed the nature of our jobs.

What time do you start your day?
I don’t wake up that early, not compared to some of the famous people in the Vogue universe. [Laughs] I’m up between 6:30 a.m. and 7 a.m. I have a young son, so I have to get his breakfast going and make his lunch and get him dressed in a timely fashion. I drop my son off [at school] at 8:30, so I’m one of the first people here. I love a quiet office to pound out some copy and do some editing before the distractions start coming. 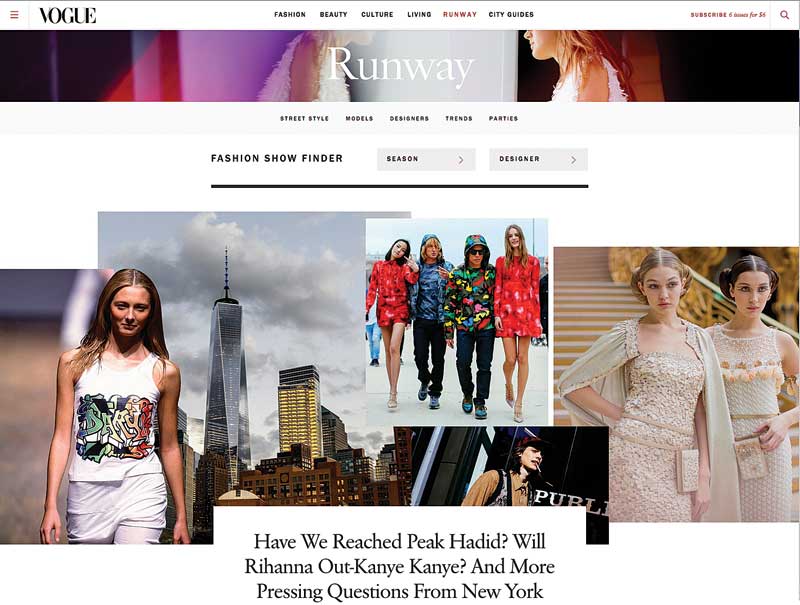 What do you like to write about?
In this moment, there’s so much moving around, and so much instability. I like to cast an analytical eye on what’s happening. I also really enjoy talking to designers and other players in the industry. One thing that’s great about the Internet is that it really loves a Q&A. There was a time when I was in journalism before the explosion of the Internet where there was a sense that the Q&A was the easy way—although you have to be a good interviewer—but people love hearing from important people speaking in their own voice.

What’s it like working for Sally Singer?
She was sort of an icon of mine from my earliest days in fashion. When I was at Elle, I always admired what she did at Vogue. She knows so much about fashion, but her interests really extend beyond it.

What qualifications are required of a fashion critic?
It definitely doesn’t hurt to have a breadth of fashion knowledge—to remember a Marc Jacobs show from 10 or 15 years ago, for example. The perspective of time is quite important in order to be a strong and important voice. It also helps if you’re fearless, and it’s wise in general to remember that you’re friendly with designers, but they’re not your friends. It’s the same for any field—if you’re writing about movies, you can have friendly relationships with directors and actors, but they can’t really be your friends.

Which sorts of reviews are the most challenging?
The hardest reviews to write are the ones where it’s somewhere in the middle. A great show tends to be an easy review; same goes for a bad show. When something feels really cut-and-dried to me, that can be trickier. We’re so image-focused these days. Do reviews still matter to readers? I hope so. From designers, we hear, “The retailer won’t book an appointment if it’s not reviewed on Vogue Runway,” or, “They don’t take me seriously.”

Fave designers?
I’m a huge Maria Cornejo fan. I wear a lot of her clothes. Bouchra Jarrar is really undersung, and should have a much bigger business and probably will somewhere down the line. I’ve definitely been thinking about vintage more since I got here.

Who is your posse in Europe?
Tim Blanks, of course, who was my colleague at Style.com for many years. You couldn’t ask for someone more fun to work alongside. He’s always saying something hysterical. I’m tight with Meenal Mistry from The Wall Street Journal, and Laurie Trott, who works at Goop in L.A. If I do have time for a nonwork dinner, those would be the three people I would call first.

What would you like to see changed in fashion?
Bring down the prices! Fashion is really expensive now, and while I respect the crazy amount of work that goes into designer clothes, a lot needs to change with retail. Everyone’s frustrated when they’re trying to buy a coat in December and you go to the store and bathing suits are showing up. Vice versa in July—when you want to buy a great summer dress, stores are already putting in winter coats. Retail needs a pretty massive rethink.

What do you do for fun when you’re not at shows?
I hang out with my husband and son, who are endlessly fun.

Hi Eddie,
I really liked the interview!. Nicole , with her reviews, portrays a better understanding of luxury fashion. I wanted to know if there is a way to find out her journey/timeline to her position right now?
Thank you.