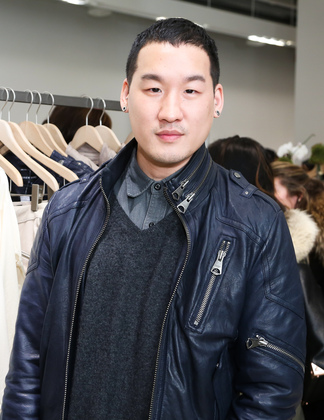 Stephen Budd, president of leather jacket and outerwear purveyor Andrew Marc, has enlisted designer Richard Chai for an ongoing collaboration. Last night at Scoop in Soho, the store played host to the collection launch with industry insiders like Nicola Formichetti of Diesel and Eugene Tong of Details showing up to support Chai. We caught up with Chai to get the scoop on the collab and to find out how he shops when he’s not designing his own duds.

How did this collab come about?
I knew Stephen Budd when he was at BCBG. There was a time when Max [Azria] was speaking to me about launching a Men’s BCBG. That’s how Stephen and I met, so we just stayed in touch over the years. He came to Andrew Marc and said, “Look, I have this interesting project.” We started initially with a capsule for Spring, which is what we’re selling now, and then it just became an ongoing thing. I’ve known Stephen for about three years now. He’s always been really honest and fun, and he has incredible energy. As a creative person you always want to find that person who gets the business side of you, but equally as crazy and energetic. He’s literally that, so it’s quite nice.

Do you pop by Scoop often?
Of course, I’ve been to this shop a million times! It’s nice to see this [Richard Chai x Andrew Marc] product in here; it’s the first time this product’s been at the store.

What do you buy when you’re not wearing your own label?
Gosh that’s really hard. I do have a bit of a shopping problem and the sad part is I don’t wear a lot of it. I’m a bit of a collector. It’s really weird. People go through my closet and say, “Why do you have Comme de Garçons still in the plastic you bought it in?” I’ll go through my closet and be like, “I remember that coat! I bought it like four years ago.” Then I’ll start wearing it and everyone will be like, “What a fantastic new coat!” And actually, it’s like four years old.