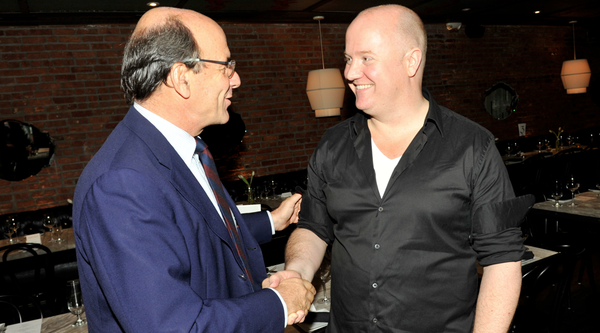 (NEW YORK) Primed for Pitti Uomo! At a luncheon at Italian resto Bocca di Bacco in Chelsea yesterday afternoon, all the details of Pitti Immagine’s next season of menswear shows in Florence come January were discussed. As next season’s selected guest designer, Diesel Black Gold’s creative director, Andreas Melbostad, was on hand at the lunch to dine and discuss all Pitti-ful matters.

Pitti Uomo’s theme for this year is “Rock Me Pitti.” The melodic motif will crop up beyond the runway, with alfresco performances and installations. “Music is so influential in fashion,” said Raffaelo Napoleone, president of Pitti Immagine. The next round of Pitti Uomo will kick off on January 7, and will run through January 10.  “This year, we expect close to 1,030 labels,” said Napoleone. A few more stats of note: Napoleone anticipates that 40 percent of exhibitors will be from abroad, 30 countries will be represented, and approximately 30,000 visitors are attending.

Napoleone alluded to overlaps with another fashion week—London’s menswear shows—which run from January 6 to 8, but expect the scheduling snafus to be worked out for next year’s January shows, and to not be an issue for the event’s June dates. This time around, Pitti Uomo will involve more intimate show spaces in lieu of larger-scaled spots that accommodate 300 or 400 showgoers.