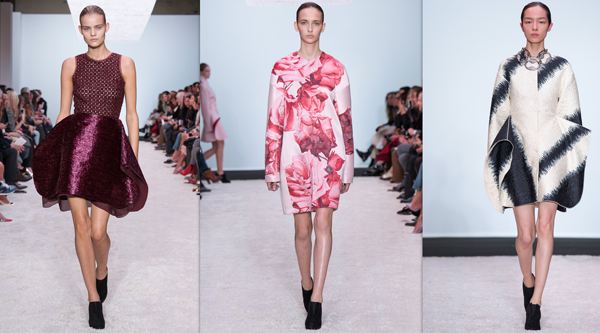 (NEW YORK) Giambattista Valli
For Fall, Giambattista Valli started off with a bang, in the form of black and white printed dresses and coats. One Rorschach test-esque print blended into blurred lines as the mods walked down the thickly carpeted runway. Mod Sasha Luss debuted the collection’s first pop of color—a dusty pink coatdress in a very ladylike silhouette, setting the tone for the rest of the romantic looks. The color scheme was a lovely spectrum of pink, white, red, and black. B&W lace covered a sweet minidress, red brocade was used for a long sleeved skater dress, and huge roses imposed on a pink silk dress. The way that pieces were cut helped keep the saccharine factor at bay; skirts were kept well above the knee, cut high on both sides, while necklines were of the crewneck and turtleneck varieties. The final looks were a bit darker, in an oxblood hue that worked swimmingly as a tweed with a hint of shine.

Saint Laurent
Hedi Slimane was all about the swinging sixties this season, with a dash of sexy schoolgirl. There were plaid miniskirts, black velvet babydoll dresses with white collars and cuffs, a plaid cape, or a grey wool mini skirt worn with a white collared shirt, black peacoat, and black bowtie. There were knee-high Chelsea boots with nearly every look and a plethora of A-line shift dresses. There was not a lot here that we haven’t seen before either on the streets now or in the past. You could perhaps buy much less expensive versions right now at Urban Outfitters. To wit: an oversize army green parka with a fur lined hood worn by Edie Campbell, a studded leather moto jacket, a big black fur coat and a black fedora, a polka dot blouse, a leopard mini. But perhaps the point with Slimane’s ultra-lucrative collections at Saint Laurent is that he knows exactly what his PYTs want. They want the best of all of those standards. Slimane creates the perfect mini—short, but not excessively so. He creates the perfect moto jacket, with the sleeves and the studs just so. Even the fedora hat has just the right size brim. And that’s what Slimane has always understood; even at Dior Homme, Slimane grasped, perhaps before anyone else did, that there was a certain kind of male that wanted a pantsuit as slim as a pencil. He’s got the “cool” factor down pat, be it for the fellas or the ladies.

Veronique Branquinho
Menswear-inflected looks à la Veronique Branquinho are a glitzy and glam affair. First up: A simple green and navy plaid fashioned into a sleek vest, a sexy strapless top, and a fuzzy mohair T shirt. Pinstripes were given the same treatment as too, and when paired with a slinky, high-slit skirt, became central pieces for an evening wardrobe. A Fair Isle print and a cream cable knit also underwent similar transformations. Between all of these experimental pieces, there were also strong basics: soft pleated skirts in varying lengths and colors, silky oversized bombers, and ladylike gloves that stretched far past the elbow. These looks were paired with messy coifs and edgy eyeliner, which, like the clothes themselves, struck the perfect balance between laidback chic and an urge to be on trend.