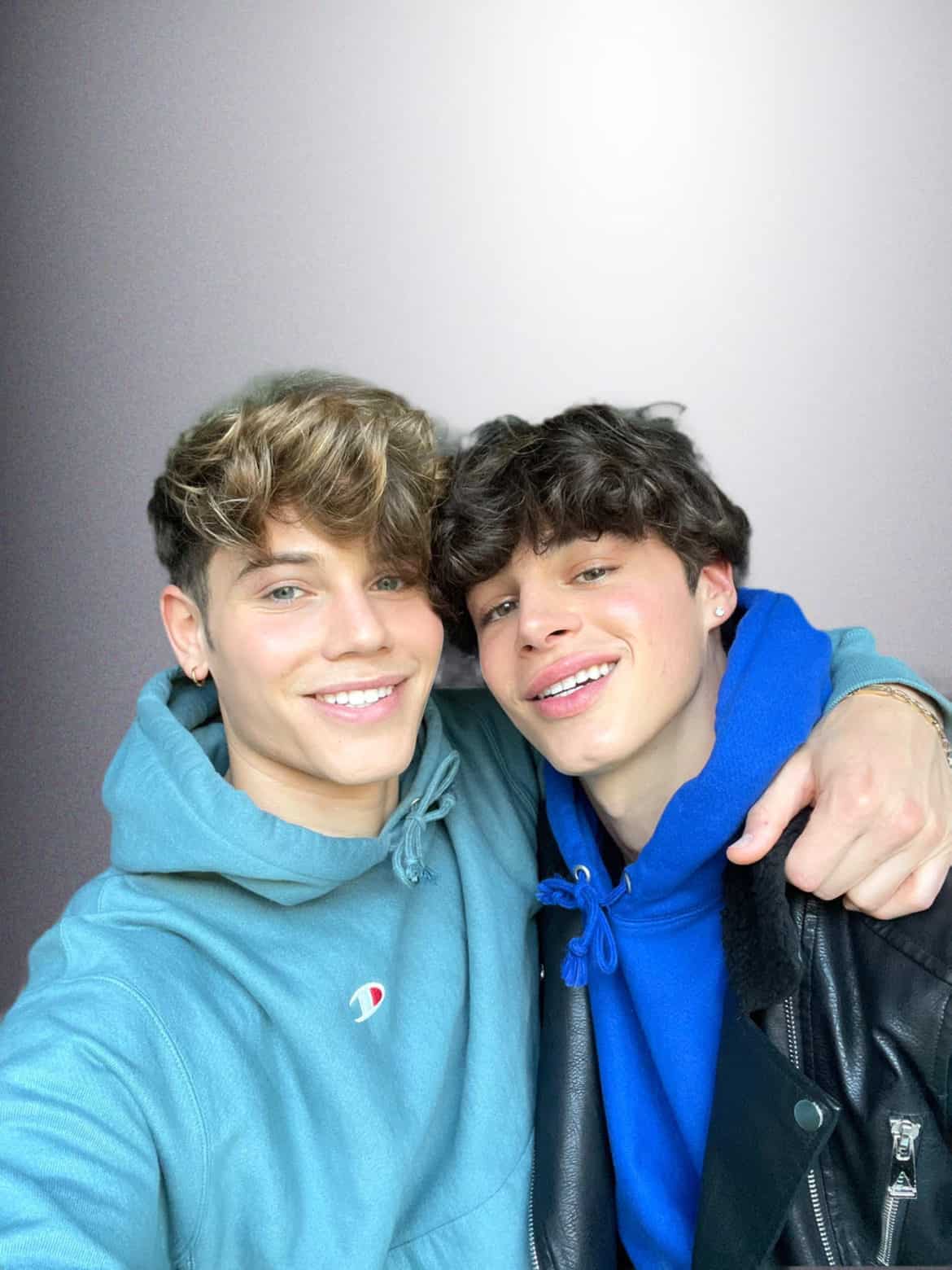 Say hello to Nicky Champa and Pierre Boo, who have a whopping 24 million combined followers on TikTok thanks to their 15-30 second-long videos which include goofy pranks, jokes, challenges, skits, and viral dances. Their audience, mostly tween girls and their moms, can’t seem to get enough of the free-spirited pair, who actually met as aspiring actors at an audition in Hollywood in March 2017. They began their social media presence by posting about their relationship on Instagram and the rest is history. The Los Angeles-based couple tell The Daily what they’ve got their sights set on next, what it’s been like receiving worldwide attention, and all about the launch of their new merchandise. BY TOM CORLISS

We saw you both attended the recent LACMA Art + Film gala! How was it?
We were invited by our TikTok manager Rachel, and at first we didn’t fully understand the magnitude of the event but once we realized what we were going to, we were so thrilled and the butterflies instantly took over. We spent three days thinking about our outfits and what we needed to wear. We knew it had to be Gucci, so we went to the Gucci on Rodeo Drive and spent six hours trying things on! We are Virgos, after all. After having our Pretty Woman moment, we finally chose our looks. Once we arrived at the event, it was pretty intimidating to see how big and legitimate the carpet was, but it was truthfully one of the best red carpet experiences we’ve had. Inside, there was a brief cocktail hour and then we made our way to the table. We were seated at the TikTok table, next to the COO Vanessa Pappas, Addison Rae, Bella Poarch, Jason Derulo, 24k Goldn, and Devon Rodriguez. It was such a surreal moment and one that we will never forget! 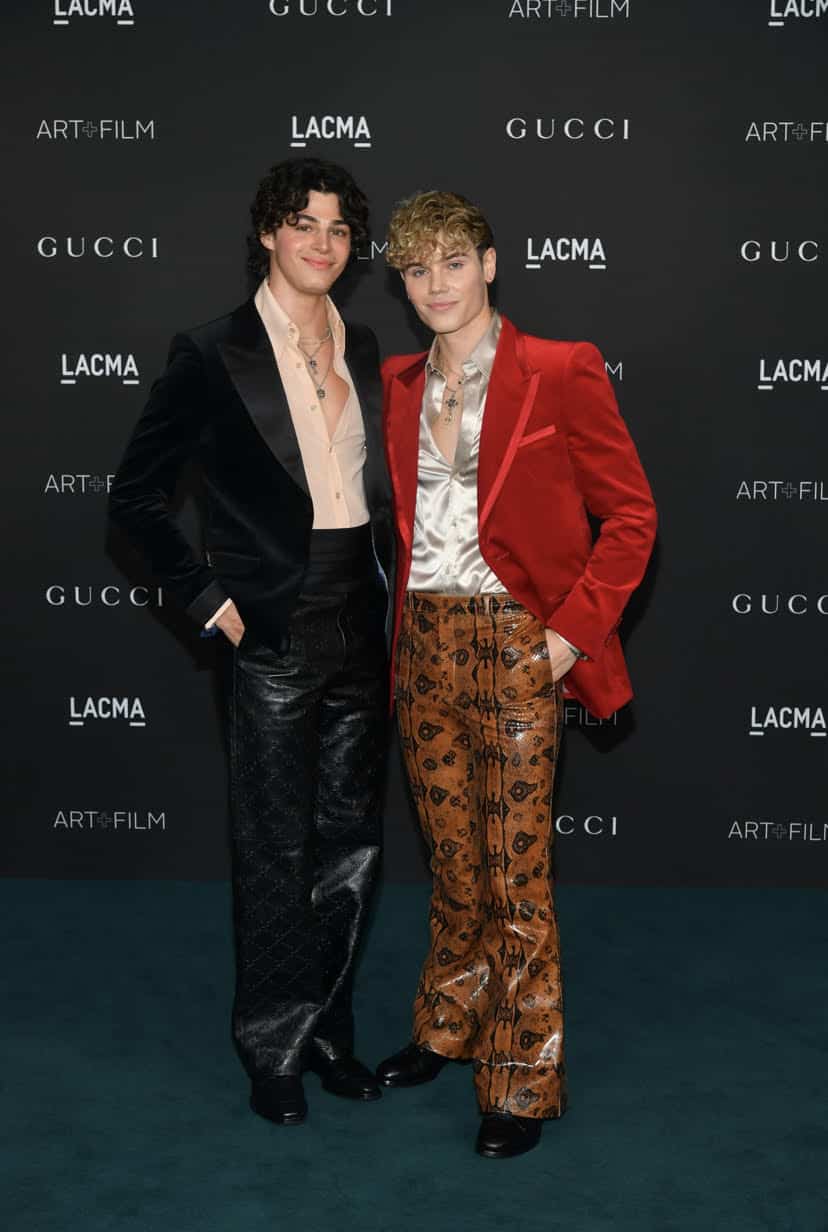 Any fun stories you can share with us?
As two somewhat shy people, we gravitated towards a corner in the back where we could sort of station ourselves during the cocktail hour. What we didn’t realize is that most A list celebrities also gravitated to this corner! We quickly paused ourselves, and looked around, and realized Miley Cyrus was next to us, as well as Leonardo DiCaprio, Hailey Bieber, the cast of Squid Games, Elle Fanning, Diane Keaton, James Cordon…the list goes on! It was as if we were in a parallel universe. That universe became even more bizarre when we found ourselves having a full-blown conversation with Miley about our wedding and what she thought the perfect venue would be. As if that wasn’t a dream already, we mustered up enough confidence to say hello to Pierre’s childhood icon, Diane Keaton, who instantly adored his accent and gave him a big hug. Nicky, who is a huge fan of Squid Games, felt like it was a no brainer to go up to them and say bravo for their mega success. Truthfully a moment in time that will forever be burnt into our memory. It was such a special evening!

Do you still pinch yourselves at how far your social media career has taken you?
It’s definitely mind-boggling but at the same time it’s taken a lot of hard work and effort and time to get here. So as surreal as it can be a times, it feels very satisfying that for all the moments we had to rely on hope and trust, these moments really prove we are doing the right things!

What have been some of the most interesting opportunities that your social career has given you?
We believe just the exposure has been the biggest asset of social media. We recently just shot our first major international commercial for Google! The coolest part of it was that they wanted to make it about us, as Nicky and Pierre, and our relationship as its portrayed on our platforms. It was shot in our house and was about what we genuinely do, which us made us feel so incredibly seen and valued.

Do you still aspire to break into film?
Yes, one hundred percent! That has always been the goal. We saw an opportunity with social media to bring us closer to these dreams, but what we didn’t anticipate was the entire career in itself that has come along with it!

How are you pursuing your Hollywood ambitions?
We just recently started having these conversations again. Social media is so consuming and a full-time job, so for the past few years ,we put it on the back burner. We recently went to the movies for the first time in a long time, to see Dune, and afterwards when we were in the car, we sort of had a moment of reflection and decided that where we are now with social media, it’s time to start focusing and pursing those dreams!

How many followers do you you both have at the moment? What are some things you are doing to keep the growth going?
We are both at 12 million followers on TikTok, so around 24 million total. We are about to hit 1 million subscribers on YouTube and are reaching a million each on Instagram. Fortunately, we are still growing on TikTok, which were so grateful for. We strive to both go up a million followers every one-two months and it’s been consistent like this for the past year. We think the biggest way to keep this up is constantly pushing ourselves and our content. Making sure its evolving, and we’re evolving, and never getting too comfortable.

Is the goal to reach Charli D’Amelio/Addison Rae numbers?
Of course, that would be incredible, and it is very inspiring to see the speed of their growth. We are constantly striving to grow our numbers, but we are also believers in “slow and steady” and maintaining a strong bond with our audience. It can be counterproductive to compare yourself to others and their paths, so we are always reminding ourselves, and also encouraging others, to focus and trust yours.

Is it easier or harder for guys to gain a following in social?
According to the demographic of TikTok, it would probably make sense that women and girls are more relatable to the viewers. Although, we are always making sure that we are relevant to all.

Can we talk about the love you have received from fans over your relationship? Doesn’t that say something about the social liberalness of today’s younger generation or am I reading too much into it?
Yes! It 100 percent shows where Gen Z has reached in terms of inclusion and the celebration of love. We both have never seen an app with such diversity when it comes to human experiences, and it is part of what inspires us and encourages us to share more of ours! 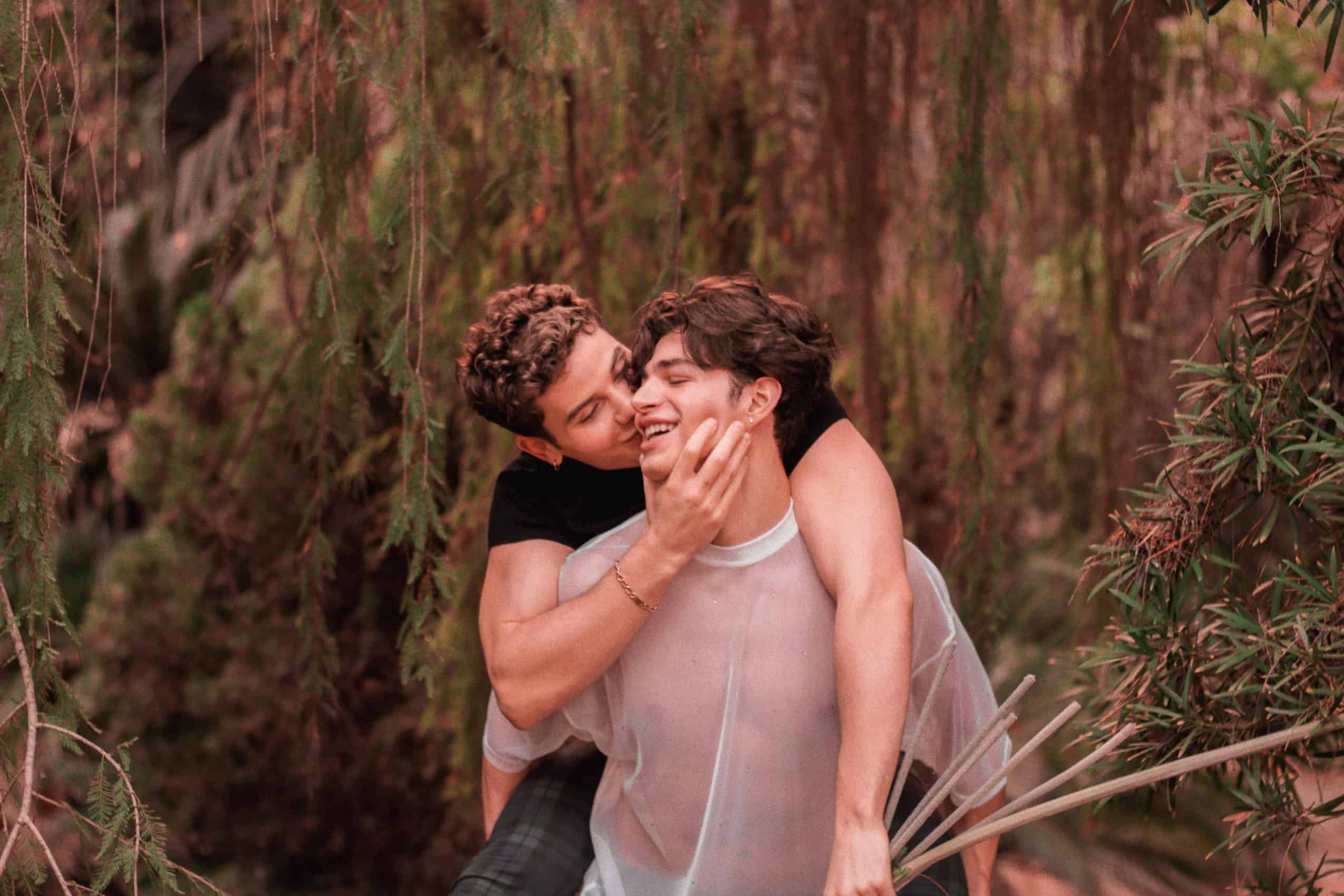 The love isn’t just in the USA, is it? Have you experienced similar acceptance and progressiveness from other countries?
We have. We recently spent the end of summer in Europe, where we traveled to France, Switzerland, and Italy and we were honestly shocked with how much acceptance and love we received from such a diverse group of people. There were kids waiting outside our apartments in Paris and Italy, who were very emotional to see us. People in the street would stop us and quote certain TikToks that made them laugh or [say how they] related to our multi-cultural relationship. There was one day when we were in Italy, in a small town on the Italian Riviera called Manarola, where we were having lunch and when we went to pay the waitress she said it was on the house because the chef was a huge fan. She came out and took a photo with us. She was in her late 50’s. It really humbled us to see how our content and story touches so many people. After Europe, it really settled in that these numbers on the screen are real people, everywhere.

Tell us about your new merchandise launch. Why did you choose to sell sportswear apparel?
This has always been an idea we’ve had and it’s just the beginning of what we want to do. Sportswear is something that brings us comfort and what we are in most of the time, so it was a very natural starting point. We have big dreams to eventually have clothing lines and expand into all other categories of fashion. 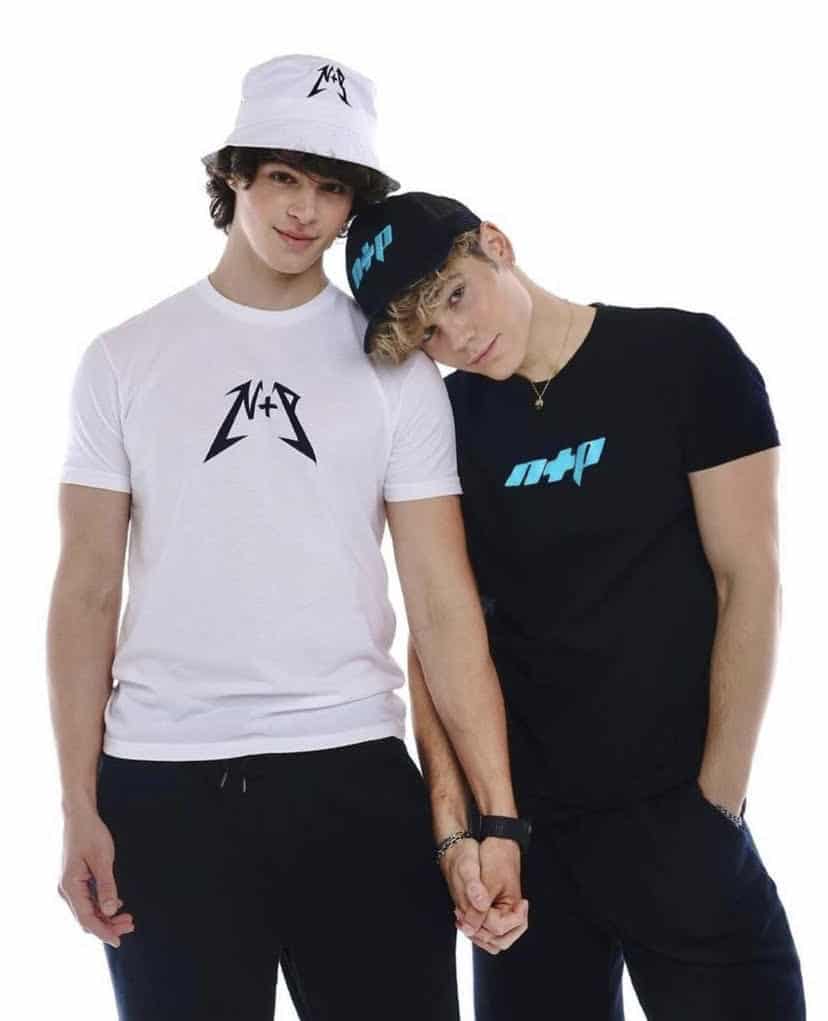 How will you celebrate the New Year?
We started a tradition back in 2019 to spend Christmas in France and then have Nicky’s mom and brother come to Paris for New Year’s where both of our families can celebrate together. When COVID hit, we couldn’t do it, so this year is extra exciting! We will be spending New Years in Paris with both families near the Arc de Triumph, which is Paris’ Times Square for New Year’s.

What can your fans look forward to from Nicky and Pierre in 2022 and beyond?
They can expect us to keep sharing our story and lives through longer videos on YouTube, Snapchat series, and of course our TikToks. They can also expect new merch and expanded product lines! Most importantly though, they can expect us to keep pursing our creative dreams and hopefully they’ll be seeing us on lots more screens of all sizes!!