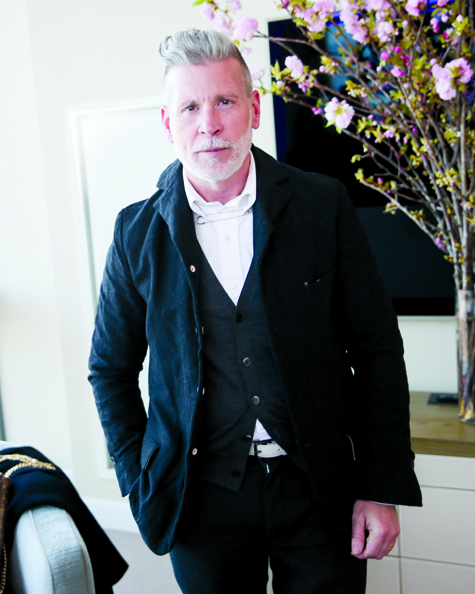 With nearly half a million Instagram followers and as many fashion collabs as his pal Pharrell, former retailer Nick Wooster is a menswear maverick on the move—literally, jetting from Australia (where he designed a luxe wool underwear line) to Japan to Pitti Uomo in Florence. Wooster’s facial hair, pompadour, tattoos, and dapper duds have made him a star, but the 55-year-old spends his downtime relaxing at home in the West Village. Over lunch at Morandi, Wooster explained his ascent.

Bloggers drool over your style. You must have a massive closet. Are you a shopaholic?
Of course. I’m a full-price shopper. I think it’s my obligation, by the way. I love Dover Street, Barneys, Bergdorf. At the moment, the West Coast has some of the most interesting retailers: Mohawk General Store in Silver Lake, Union on La Brea, RTH on La Cienega in L.A.; Unionmade in San Francisco. Gentry NYC in Brooklyn is great, too, and I love Japan. It’s a shame that more Western brands and stores aren’t more in tune with what’s happening there.

You are a major jet-setter. Any travel tips?
Well, I travel at least once a month—I’ve logged over 85,000 miles this year—but I am the worst traveler in the world, because I overpack. You would think that I would have learned by now, but no. I’m very organized and I know how I like to pack things: pants go first, jackets on top, sweaters and shirts on the side.

How have sites like Instagram changed the world of men’s fashion?
They have given men a road map without having them ask for direction. Blogs, Tumblr, and Instagram have all contributed to the systematic uncovering of information. I’m a guy, and I don’t ask for directions. I think I can figure it out myself, and the same is true for men getting dressed. They want to know, but they don’t want to ask.

Your Instagram account is like an ad for Nick Wooster, the brand.
I’m not a corporation. I only started it because, like many other people, I’m in the center of some interesting things. The first time I flew on a private plane, I took a picture because I couldn’t believe that I was on a private plane. I love the idea of having a visual diary of what’s going on in my life. In the old days, I used to thumb through a shoebox full of old pictures. Now, it’s conveniently on my phone in a chronological order. The fact that people are interested? I’m superflattered. But sometimes I do go dark—like, I’m sick of me.

What’s your best style advice?
Everybody looks great in navy blue—navy peacoat, navy overcoat, navy Windbreaker, navy blazer, navy suit. I’m a huge fan of navy sneakers, too. At the end of the day, that’s all a guy really needs.

You’ve worked for Barneys, Bergdorf, and other big brands. Do you miss having a full-time power job?
I think I’m unemployable now, so the days of me showing up to work every day are behind me, which is okay, because I did it for a long time. I was programmed to believe that was the only way that I could make a living. In certain ways, I work harder now, because it’s relentless, but I’m able to call my own shots and not have to follow the dress code.

You design for Lardini in Italy, United Arrows in Japan, an underwear brand in Australia, and a new project in China. When you were a buyer, did you really want to be a fashion designer?
No. The world doesn’t need more designers, but people today are interested in a point of view. There’s a group of people who are interested in things I have to say, so I feel like I’m providing a service. As long as people would like to see what I do, I’m happy to keep doing it.

Your designs are very much aligned with your personal style.
Selfishly, I’m in this for the clothes.

You do so many things at the same time. Do you have an assistant?
No, probably for the same reason that I’m not in a relationship. I’m very closed, but that doesn’t mean that it won’t happen.

A relationship?
I’m definitely done with those. I need an assistant. I need help!

How do you unplug from the fashion frenzy?
I love Fire Island. I turn on the television, I watch a movie, I read a book, and I smoke some cigarettes.

Matthew Marden: A Decade At Details