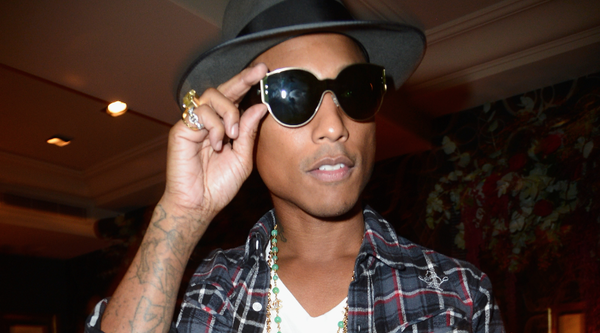 (PARIS) Last night Moncler opened their new 3,428-square-feet space on Rue Faubourg du Saint Honoré which houses their new Paris flagship store as well as the brand’s offices and showroom. Pharrell Williams who was on hand for the occasion, along with chairman Remo Ruffini. “I don’t know if I’m in Paris, the year 2020, or if I’m in Asia in the year 2050,” Pharrell remarked. “It’s like walking through a museum and it just speaks to the incredible taste and tone of Moncler.” Pharrell was there to celebrate not only the new store, but his new line of sunglasses. Pharrell’s futuristic specs are made from a single piece of titanium, avec nylon stems and frame. The result: super lightweight shades.

Despite keeping the press waiting for nearly 45 minutes at the press conference amid a heavy show schedule, he arrived in good spirits and was generally very kind to the crowd, even complimenting one reporter’s personal style as he made his way to the front of the room. So what does he think is the biggest fashion faux pas in the sunglass realm? “Probably what I’m doing now: Wearing them inside,” he explained.

At the bash, Pharrell was seen taking time for a photo opp with a few kids present at the incredibly packed party. The chic set turned out, despite the shindig occurring right before the Lanvin show, including Ingrid Sischy, Sandra Brant, Colette’s Sarah Lerfel, and Olivia Palermo. Exiting the building after the bash was another story altogether. Meanwhile, the store had decked out mannequins in leopard print puffers and lace up boots that were mounted above partygoers’ heads on ski lifts, we spotted a fully bedazzled cream knit ski mask, and knee-high mukluks. We also spotted some very luxe, completely furry displays housing leather briefcases. Looks like flush, fur-trimmed times for maison Moncler!
PAIGE REDDINGER