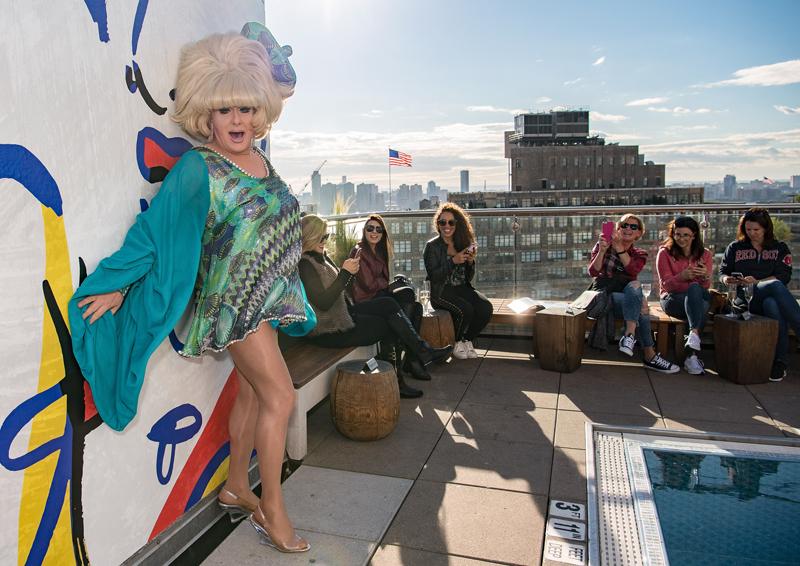 Who brought the house down at The Daily Summer season premiere party last eve? Lady Bunny, who’s as fierce and fabulous as you could ever imagine!

Who are you wearing tonight?
I am wearing a Garo Sparo. He does a lot of stuff for Amanda Lepore, Dita Von Teese, and a lot of burlesque performers.

How long does it take you to get ready?
Such light make-up? Five minutes. No, you know, about 30 to 45 minutes. The other drag queens laugh at me because my makeup has stayed the same. To them I say, ‘B**ch, if and when you ever find a look that works for you, you better stick with it.’ I’ve seen too many photographs this year where I’m like, ‘Oh! Maroon lipstick!’ And then I see myself and think, ‘Oh! A grim snapping turtle!’

So you like being consistent?
Well, you don’t have to! If you’re a fashion plate and you can wear whatever color and style silhouette is in season, then feel free to experiment. But if you have figure flaws or if you have certain shades which bring out your eyes or compliment you, then you might want to stick with it!

Got it. The music is on point tonight!
I’m playing “Telepathy” by Christina Aguilera right now. The original was by Nile Rodgers and this is the brilliant remix. I mean, honey, who’s going to make the music like Nile did in the next 30 years? That’s what I want to know. We’re not gonna be sampling “Turn Down for What!”

What else is on your summer playlist?
“Disco Chick” by Kiki Kyte. It has the best of old school, but with new school production. I play it every time I DJ. It gets the party going! And remember, these are troubled times, and we’ve got to seek out joy. We have to make a point to do it, because when you get on Facebook, suddenly you see someone’s dog died or there’s a political argument! We have to seek out joy, or we will have none.

Watch Katy Perry Get Interviewed By a 7-Year-Old Girl