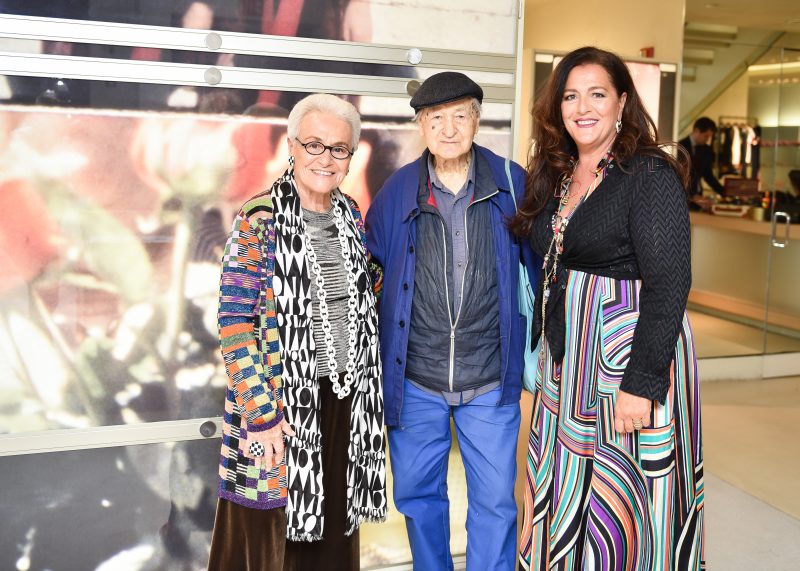 Missoni celebrated their third installment of their Surface Conversion Project, which invites artists to reimagine the brand’s retail spaces. The new installation features work by Jonas Mekas, the 94-year-old filmmaker, poet, and artist who has been called the godfather of American avant-garde cinema. Previous collaborations on Missoni’s Surface Conversion Project include a collaboration with Servane Mary and Raphaël Castoriano‘s Kreëmart.

The Mekas exhibition features a double-screen video installation visible from the shop windows that celebrates the seasonal cycles of the metropolis of New York City. On the second floor, a sepcial version of Mekas’ Walden, ir projected onto two screens for the first time ever recomposing and splitting the original montage into two streams representing winter and summer. Flowers are a central theme to the exhibition. “You don’t think flowers are plentiful in New York City,” said Mekas. “But if you look closely, you will find that they are everywhere.”

Angela Missoni, who is celebrating 20 years at the helm of her family’s business, said she and Mekas bonded two years ago when he did a show with a friend of hers in Italy. “It just so happened that we had many things in common. I love the positive views he has on life, always,” Angela Missoni told The Daily. “He was also a refugee like my father was a refugee. My father was born in Italy, but from a piece of Italy that Italy lost after WWII, which became a part of Yugoslavia. He was born in a city called Ragusa that then became called Dubrovnik. He was raised in Zara, which then became Zadar. Italy lost those territories so when my father came back after five years of prison, he no longer had a home. So he and his family had to build a new life. Both my father and Jonas Mekas had to create a new home.” Mekas, originally from Lithuania, was detained along with his brother at a concentration camp in Elmshorn Germany in 1944 for eight months before escaping and living in hiding on a farm for two months until the end of the war. They would eventually find refuge in the U.S. and settle in Williamsburg, Brooklyn.

“It was so incredible that he had the dream of the flower that he had 20 years ago and I love dreamers,” said Missoni. “I am also a dreamer.”

The inspiration for the exhibition was based on the below journal entry Mekas made on October 9, 1997 in which he recalled his dream:

“Last night I had an ecstatic dream.

Suddenly before my eyes appeared fields and fields of wild flowers. They were passing by my eyes. Field after field, the meadows full of flowers in the most exquisite colors: blue, yellow, red, purple and they were all so real. I could almost smell them, like in my childhood.

I told this dream to Auguste this morning. So he said, you know, this dream tells you that in your previous life you were a bee. Yes, I said, it must be so. I always liked flowers, I always gathered them as a child for the healing woman of my village. She trusted only me. I knew all the flowers of our village and the neighboring villages too. So you may be right. I always had a very personal relationship with flowers.”

From a man that has experienced so much, his enthusiasm, positivity, and sense of beauty was palpable both in person and in his work. Just the night before, Mekas was said to have run home to paint some floral canvases to complete the exhibit after feeling that something was missing. Those pieces are now displayed in glass cases in the center of the boutique. Missoni radiated a similar sense of passion about her work. “Everything has changed so fast over the last 20 years,” said Missoni. “So I’m kind of surprised that we can still be here and still be alive and still have something to say. I feel proud that we are still here and that Missoni is still in the family.”

Teresa Maccapani Missoni on Her Plus Size...

Missoni and Pigalle Team Up on Menswear...