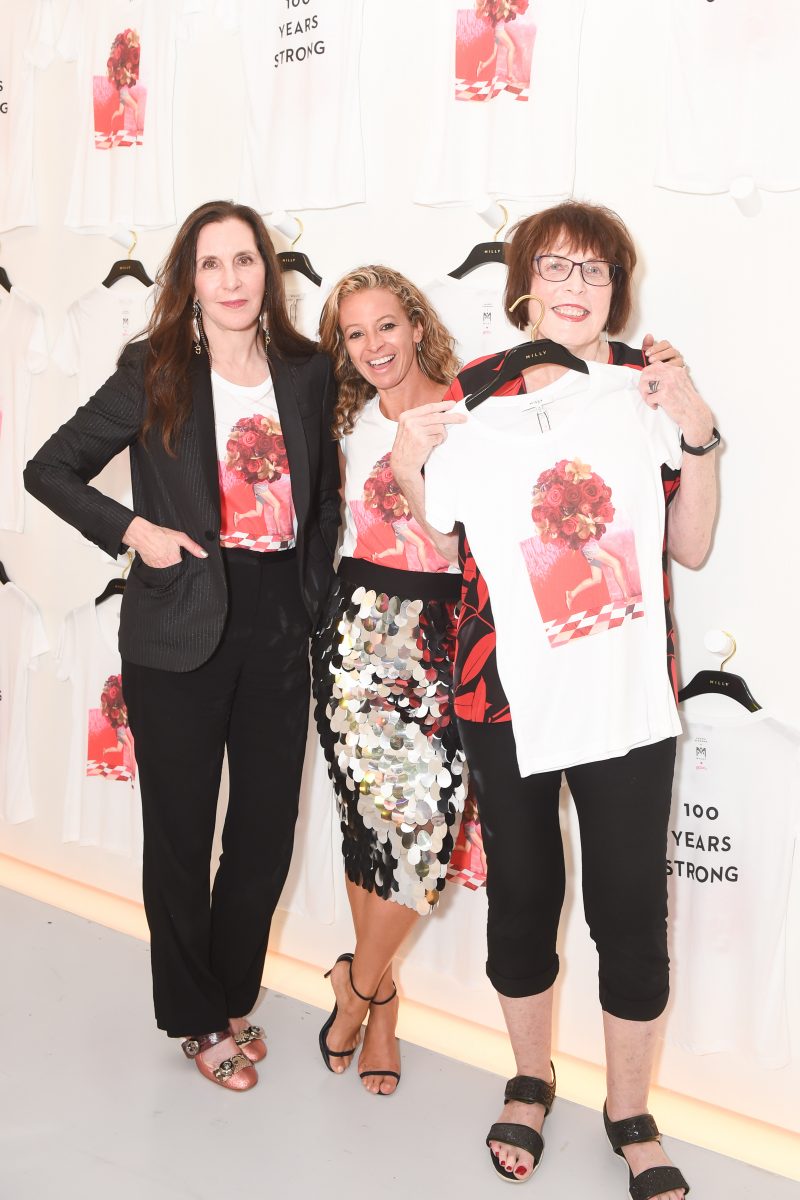 Michelle Smith, co-founder and creative director of Milly, along with artist and filmmaker Laurie Simmons, co-hosted a party at the Milly store in Soho last night to celebrate their new t-shirt featuring one of Simmons’ photographic prints to raise money for Planned Parenthood. Smith has been making tees to empower women, now a pervasive fashion trend, for five years. Her first empowerment tee read “I’m not bossy, I’m a boss” and remains one of her bestsellers.

The new t-shirt image is an extension of Simmons’ Walking & Lying objects series, which celebrated the 100th year anniversary of Planned Parenthood—100 percent of the proceeds from the t-shirt will benefit Planned Parenthood. Simmons is most recognized for her body of work that includes photographs featuring dollhouses, cakes, guns, and handbags with long, slender doll legs that are intended to make a statement on traditional gender roles. The image on the Milly shirt features a female athlete’s figure topped off with a bouquet, which is meant to represent a gift or thank you to Planned Parenthood for its role in female empowerment.

The t-shirts lined the walls of the venue and a projector displayed mantras like “Don’t Fck with us, Don’t Fck without us” onto the wall. It was a packed house with plenty of guests coming to have their t-shirt signed by Simmons.

“We were introduced by Nicole Angel Wachter, who is a board member of Planned Parenthood,” Smith told us at at the event. “Nicole asked me if I would be down to do this with Laurie and I said, ‘Oh my god, would she be down to work with me?’ I admire her so much. She is so nice and down to earth. You just want to hang out with her and have a cup of tea.”

Indeed, Simmons was so warm and friendly, we had to wait in line for a chance to chat with her as everyone that met her didn’t seem to want to let her go. “It seems like years now that I’ve been involved, but everyone really woke up at once when they realized that Planned Parenthood was under siege,” Simmons told us. “Marilyn Minter, Cindy Sherman, and I did an auction some years ago where we raised a ton of money for Planned Parenthood. It’s sort of my first go-to when it comes to being charitable, but that doesn’t mean that I don’t work with or do a lot for many other organizations. I really feel like everyone should be online at night tithing—whatever you can give. I joke with the young women that work for me and tell them, ‘Just say no to the dress!’ Just for a night. It feels so amazing to do it.”

Simmons said she first started to recognize the importance of feminism in her early ’20s just after she graduated art school. “I started to really catch on to the second wave feminism movement with women like Gloria Steinem and Betty Friedan,” said Simmons. “It just sort of hit me over the head. It was really that moment in the ‘70s and in the art world. I came in right after the generation before me who had really separated themselves as female artists and I learned everything that I could, but I didn’t want to be part of a separate culture. I wanted to compete alongside men. That was really my awakening. Abortions were legalized around the time of my political awakening and I made the assumption that we would never go backwards. I thought that progress couldn’t be undone. In terms of my kids [Lena Dunham and Grace Dunham], I thought we had made it OK for them. It’s really excruciating to see what’s happening now.”

Simmons added that her kids are her secret weapon—both have been influential in moving the needle on today’s feminist issues and Lena Dunham’s Girls was arguably trailblazing in representing real women with real issues as they struggle to come of age in their 20s.

Next up, Simmons will be part of a pop-up shop called Anger Management at the Brooklyn Museum, opening tomorrow and on through November 12, that will feature objects and art by artists featuring messages and images of resistance and hope curated by Marilyn Minter and Andrianna Campbell. “It will raise money for the ACLU and Planned Parenthood,” said Simmons. “I made resistance thongs. Oh my god, I can’t even say it out loud! [Laughs] There these adorable neon thongs that look like they were bedazzled by a 16-year-old.”