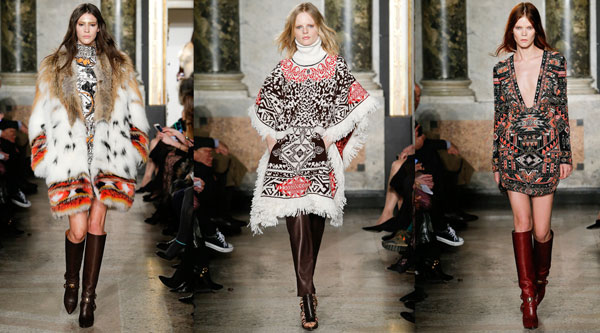 (NEW YORK) Pucci
Peter Dundas looked West this season at Emilio Pucci. That meant big furs and ponchos in Navajo prints, equestrian-style tops and jackets sporting woven leather treatments that were reminiscent of saddle designs, and an embroidered Mariachi-style pantsuit that took inspiration from South of the border. It’s Pucci, after all, so the collection was tinged with plenty of that ‘70s sex appeal for which the brand is known. There were studded minidresses with plunging necklines and skin-revealing jersey dresses, like an earthy brown halter gown with peep holes around the neck line and…ahem…below the waist (had the latter been any larger, they would’ve revealed too much!). Even a bulky knit ochre-hued dress came with fringe and a neckline that dropped all the way down to the naval region. It’s the wild, wild West, after all.

Marco de Vincenzo
Last season in Milan, Marco de Vincenzo‘s show was buzzed about not only for the collection, but because of its major front row. Anna Wintour was immediately rushed backstage to greet the designer after she showed up last minute to the show, and LVMH executives were perched in the best seats. Turns out, the buzz was true: Today, WWD announced that LVMH would be investing a minority investment in the young Roman designer’s eponymous label. Though a minority stake, the investment is said to be significant. One can see why de Vincenzo caught the fashion conglomerate’s eye. Known for his complex fabrics that play with concepts of optical effects and refractions of light, de Vincenzo’s clothes are at once completely wearable in the real world, yet look like nothing else out there. A ribbed shift dress on Hanne Gaby Odiele that opened the show consisted of squiggly curving lines in shades of black, ochre, white, and nude. The look came on skirts and tops as the wave-like pattern rolled over pieces like a golden A-line skirt, where one side was done in black and white waves over an olive green panel. A peach and burgundy polka dot dress revealed another shadowy polka dot layer beneath, and was topped off with polka dot fur or plaids done with so many checks, they blurred together. The prismatic pieces at the end were simply brilliant, like a simple shimmery pleated rainbow colored dress worn with a matching dress coat. Looks like de Vincenzo finally found his pot of gold.

Roberto Cavalli
Roberto Cavalli is still vibing on the ‘20s this season. Like his Spring collection, the designer turned out several flapper-ready pieces like a drop waist cream shift with Art Deco silver beading and a fur fringe skirt or a floor-length silver studded fringe gown, both the kind of thing Louise Brooks’ dreams would’ve been made of. But it wasn’t purely a ‘20s era collection. To wit: Graphic ponchos and wool coats with big fur collars were more ‘70s than the kind of thing a silver screen siren would wear. Later, the show went up in flames. A blaze of flames crept up the hemlines of silky gowns, and one fur collared dress coat was fully consumed by fire. Could even the most fiery of Cavalli’s sexy femme fatales don those numbers? Possibly…but there was plenty of that sexy man-eating Cavalli glam elsewhere in the collection.