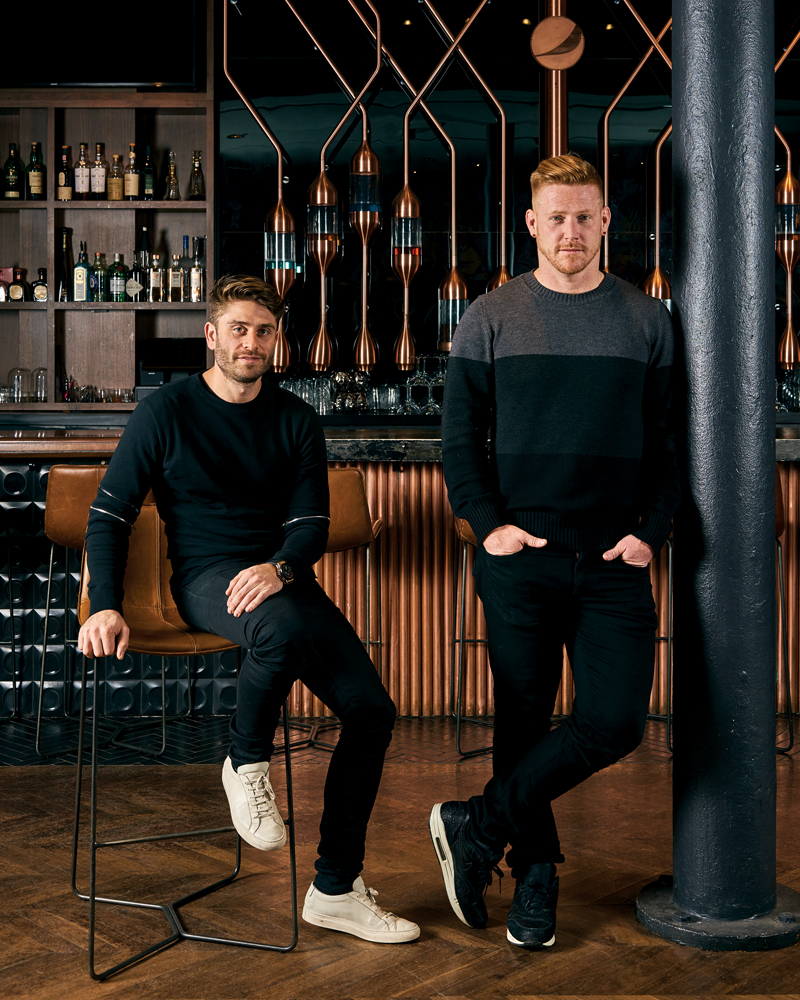 Lisle Richards and Eric Marx are the brains, beauty, and brawn behind The Gilded Lily, The Wayfarer, and now Kola House, a newer hot spot in the Meatpacking District backed by PepsiCo, designed by Lenny Kravitz, and frequented by fashion folk. Intrigued? Your table awaits! That is, if you can snag a res…

How do you guys know each other?
Eric Marx: We were working in the same building. [Lisle] opened STK back in 2006, and I opened this place called Tenjune.
Lisle Richards: Eventually, he ran EMM Group and I ran The One Group. We also worked together, because it was symbiotic. One day, Eric came to me and was like, we should do this for ourselves.

What are your roles?
Lisle: That’s the question we ask ourselves every day. [Laughs] We do a lot of the same things. It depends on the day and the project, and who we’re dealing with. What we build is not just a physical space for people to eat, it’s a backdrop to make memories. We do special occasions. We build places where people can live their lives. So we are also in the construction industry, the beverage industry, PR, fashion, art, real estate!

Do you work seven days a week?
Lisle: Yeah—even when I was [on vacation] in Cuba!
Eric: He sent messages like: “Bad service; deal with Eric.”
Lisle: That was my out of office. [Laughs]
Eric: When you’re in hospitality, people are reaching out to you for reservations or to meet for a drink, which is our work.

How did this project with PepsiCo come to be?
Lisle: We have the [Gilded Lily] nightclub downstairs, so we do a lot of fashion and art and fun times, and we’re also considered really legitimate within the food industry because we own a three-meal period restaurant in midtown called The Wayfarer. PepsiCo approached us because we’re active in the music community. Kola House is very music-forward—we do a lot of live performances, both concerts and during dinner. They wanted a place to help support the communities they’re so involved in, which is art and fashion and music. That’s stuff that we do every day.

How is The Wayfarer doing, by the way?
Eric: It’s doing great. We just had the Saturday Night Live after-party with Alec Baldwin and Ed Sheeran. We’ve also done them with Jennifer Lawrence, Amy Schumer, and Kristen Wiig.

Fun! So what is kola nut?
Lisle: Kola nut sits in the category of coffee beans and cocoa beans—it’s a bitter kind of flavor. From a culinary perspective, it’s good to put in the cuisine itself. You’ll find it in a BBQ sauce or a rub or a molé. All those profiles make total sense for kola nut.

What are some of the dishes it’s in?
Eric: It’s in a rub, the steak, the pork tacos, a signature. It’s in the meatballs, also a signature. And it’s in the newly added pizzas, which are amazing.

PepsiCo branding is noticeably absent at Kola House—why’s that?
Eric: We and Pepsi felt that for it to be an authentic dining experience, we can’t have a ton of branding all over the place. Otherwise, it just feels like an everyday restaurant.
Lisle: We think that people are smart; they know where they are, and you don’t need to tell them over and over.

NEW YORK, NY – DECEMBER 16: Bella Hadid having dinner at Kola House for dinner and the release of her Paper Magzine cover on December 16, 2016 in New York City. (Photo by Thaddaeus McAdams/Getty Images)

Who from the fashion crowd have you hosted since opening in September?
Lisle: We opened with Milk’s closing party last season, a direct result of being right down the street. We did events for Interview magazine, Re/Done jeans, Cushnie et Ochs, Heron Preston for the Department of Sanitation collaboration, Paper magazine for Bella Hadid, the Wilhelmina holiday dinner, the One Management holiday event. We just did a birthday party for Shaun Ross’s mother.
Eric: A surprise birthday. She was pleasantly surprised!
Lisle: He’s like a friend of the family. He called up and said, “I want to do a party, but I want to make sure that it’s a party.” We were like, whatever you want, my dear. We love you.

Were you shocked by the turnout for Bella’s party?
Lisle: This is probably the third or fourth party we’ve done with Paper, so we know what Drew [Elliott] and Mickey [Boardman] do. [Laughs] We love working with them; they’re great. And, obviously, Bella is Bella, so she draws a crowd.

What other notables have walked through the doors?
Lisle: It’s really eclectic. It’s anyone from Chrissy Teigen to Machine Gun Kelly to Ashley Benson to Amber Rose. We were surprised by her—she just showed up—she loves us!
Eric: Chace Crawford and Sebastian Stan, Gossip Girl days.
Lisle: The whole Dancing With the Stars crew.
Eric: Nick Lachey and Vanessa Minnillo, Jonathan Cheban; we did Caroline Vreeland and John Targon from Baja East’s birthday party; Maxwell [Osborne] from Public School has been in to eat a bunch of times. We have the Baja East NYFW after-party coming up.

Kola House has been called a club, a restaurant, and a marketing experiment—is that an accurate description?
Lisle: I think it’s a restaurant first and foremost.
Eric: People look at us more as an activation, or an event space and cool experience.
Lisle: You have to provide something of special, lasting value, and I think that we have been afforded an opportunity to do something that’s not on the beaten path. People love to fit it into one category, but the interesting concept of this is that it’s not any one thing. There are so many different ways to immerse yourself in what Kola House is.

LCD Soundsystem performed when you first opened—what’s your personal taste in music?
Lisle: It runs the gamut.
Eric: I’m a big LCD fan. I like rock, indie, electro. You kind of see our taste reflected in a lot of the performances. We have Galantis coming this Saturday. We have Jidenna, Lukas Graham, and Alessia Cara coming up.

Lenny Kravitz’s design firm collaborated on the space. How was that?
Lisle: Kravitz Design all started because he designed recording studios. His design kind of speaks to that. It’s always very warm, and there’s a lot of wood, patterns, and plush materials. It was interesting to work with him on a large commercial project.

Has Lenny stopped by for dinner?
Lisle: Not yet—we are eagerly awaiting the day. Paging Lenny Kravitz!