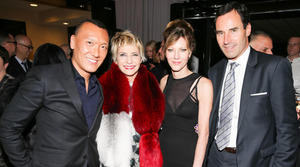 (NEW YORK) Audrey Hepburn may have snacked on croissants outside the window of Tiffany & Co., but Lori Goldstein had a much more lavish affair with dinner at the esteemed jewelry house. Hosted by ELLE and Tiffany & Co., Goldstein invited close friends, past collaborators, and a slew of fellow ELLE editors to celebrate her first tome, Style Is Instinct. Guests were escorted through the deserted first floor of the jewelry store (every girl’s dream come true) and whisked up to the fifth floor, where an intimate crowd were sipping cocktails and exchanging kisses. The lady of the evening welcomed friends like Anna Sui, Jamie Bochert, Kate Young, Cass Bird, Crystal Renn, Kevin O’Malley, Anne Slowey, and Brian Atwood.

Cocktail consumption aside, the room was positively buzzing with adoration for Goldstein. Joe Zee reminisced on meeting her in 1992. “Oh my god,” he gasped, “I’ve known her for almost 21 years!” While Hilary Rhoda described her most recent shoot with the stylist: “We did the NFL campaign with Patrick Demarchelier, where she took football jerseys and made them fashionable and cool. We were decked out in jewelry and Chanel bags. If you can make a football jersey work on girls, you can make anything work!” Goldstein was the first “real” stylist that Zac Posen ever worked with when he was 22 years old. “She taught me that it was about taking risks, blending textures and breaking rules to create originality.“

Eventually, the crowd was directed into the adjoining room for dinner, which was decorated with hundreds of candles and dark, seasonal centerpieces. Following toasts by Tiffany’s Linda Buckley and ELLE‘s Robbie Myers, Goldstein raised a glass to everyone in the room, thanking them for all of their help over the course of her career. During the three course menu of salad, black cod and s’mores cake, which one attendee noted as “very Lori,” guests played musical chairs, jumping from one table to the next, to catch up with friends and take selfies with the lady of the evening. After finishing off their chocolate truffles, guests descended onto Fifth Avenue with Goldstein’s style secrets tucked in a Tiffany blue bag.
BY DENA SILVER

You'll Never Guess Who Is Complaining About Karl Lagerfeld