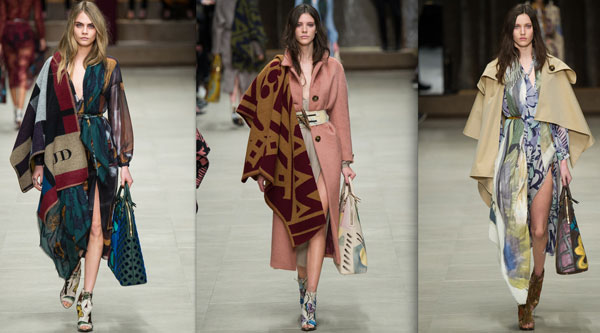 (NEW YORK) Burberry Prorsum
Christopher Bailey delivered a fantastic collection of his take on bohemian chic with The Bloomsbury Group serving as inspiration this season. The Bloomsbury Group were an influential group of writers, artists, and intellectuals in Britain during the first half of the 20th century. What ensued were the brands’ classic trench coats and purses, painted and worn with long painted scarfs belted at the waist. There were big slouchy knits in boho patterns, painted shearling jackets that came cropped or just below-the-knee, and stellar colorfully printed blankets thrown over the shoulders of a cream prairie dress or a pale pink cashmere coat. Cara Delevingne closed the show in a colorful leg-revealing chiffon dress, with a printed blanket thrown over one shoulder that revealed the mod’s initials, “CDJ” monogrammed near the bottom. Sign us up. On the heels of his new CEO appointment, Bailey is proving that he hasn’t lost his creative chops that helped put Burberry back on the map, despite his rise up the corporate ladder.

Erdem
Velvet, lace, fully croc dresses and coats with Elizabethan collars, rich brocade, embroidery, and jeweled dresses lavishly floated down Erdem’s runway this season. Coats that came unhinged at the elbow with jeweled cuffs and metallic Turkish blue jacquard and black split sleeve fully croc jacket with a high collar were standouts in the outerwear department. An A-line embroidered black dress sported unfinished fringe that looked like the embroidery had been pulled, a sheer lattice beaded long sleeve cocktail dress, and a baby blue caplet cocktail dress with a burgundy jeweled floral print stunned in the evening wear category. Top that off with some ultra-chic pointy ankle strap Nicholas Kirkwood shoes, and you have a collection with lots of luxurious pieces to lust after.

Roksanda Ilincic
Timid dressers need not apply for Roksanda Ilincic’s Fall 2014 collection. Let’s start with the belts, composed of thick rectangles of gold held to the body with large elastic bands. That was nothing compared to a confetti-covered strapless gown, featuring a smattering of tiny blue squares, yellow circles, and orange diamonds. But that’s not all: There were also skirts with uneven hems, one hitting the knee and one extending down to the ankle in panels of baby blue and camel, a patchwork fur coat paired with a patchwork dress, and a navy dress with PVC cutouts. There was something riveting about Ilincic’s busy collection that implores one to pore over the looks for hours, soaking up every last detail. Including those pointy loafer-esque flats sporting proper doses of fringe.