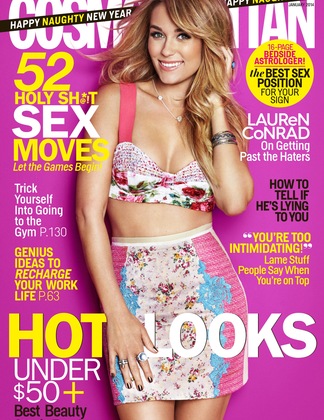 Hard to believe we’re already starting to write about January issues, but here we go…Lauren Conrad does cover duty on the January issue of Cosmopolitan. The recently-engaged designer tells them about mistakes she’s made with friends over the years. “Being on television all those years, I got to view my own behavior,” she explains. “One thing I realized is that I was too hard on my friends when it came to guys. Instinctually, I wanted to protect them. But then you come off as judge-y and people are reluctant to come to you with a problem. I had to cut ‘I told you so’ from my vocabulary.” If LC doesn’t float your boat, Cosmo‘s got you all covered with “52 Holy Sh@t Sex Moves! Let’s The Games Begin”! Now that is hilarious.

How To (Kind Of) Get The Miley Cyrus Kitty Look

All the Winners from the CFDA Awards,...

Catching Up with Lo Bosworth

All The Blonde Babes Came Out For...

All The Blonde Babes Came Out For...