Krystal Bick Explains the Process Behind Her Old Hollywood Shoots 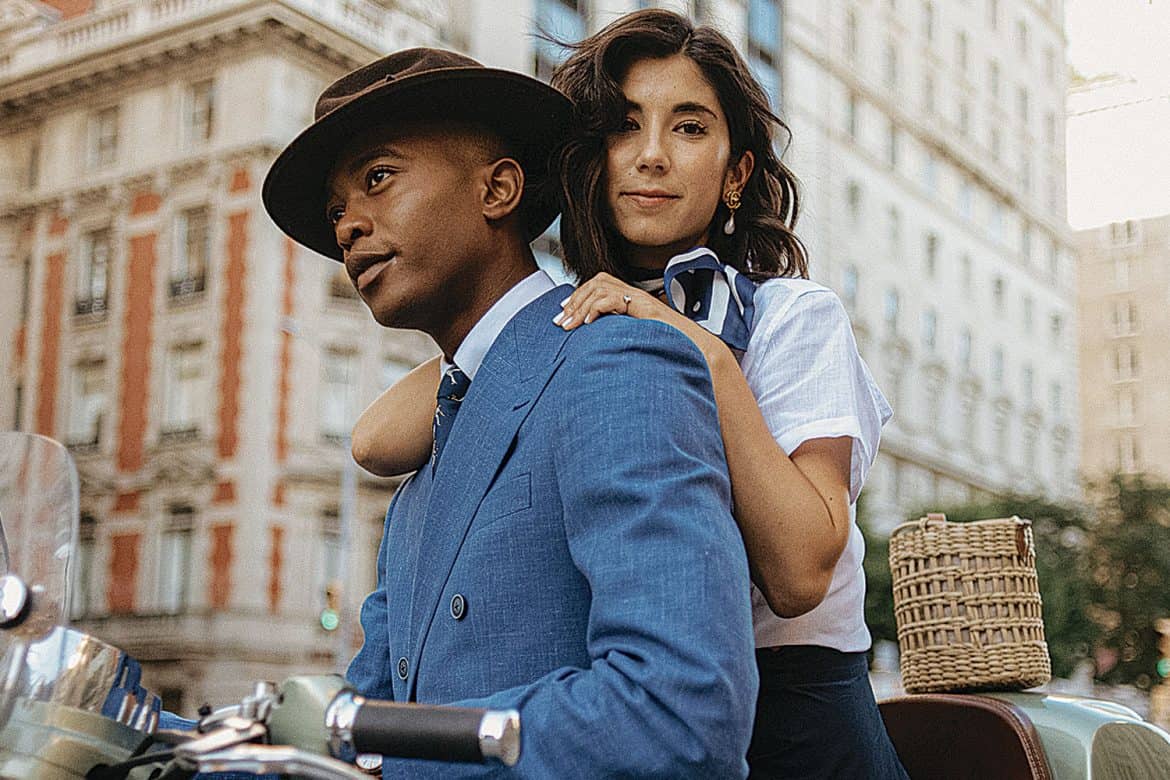 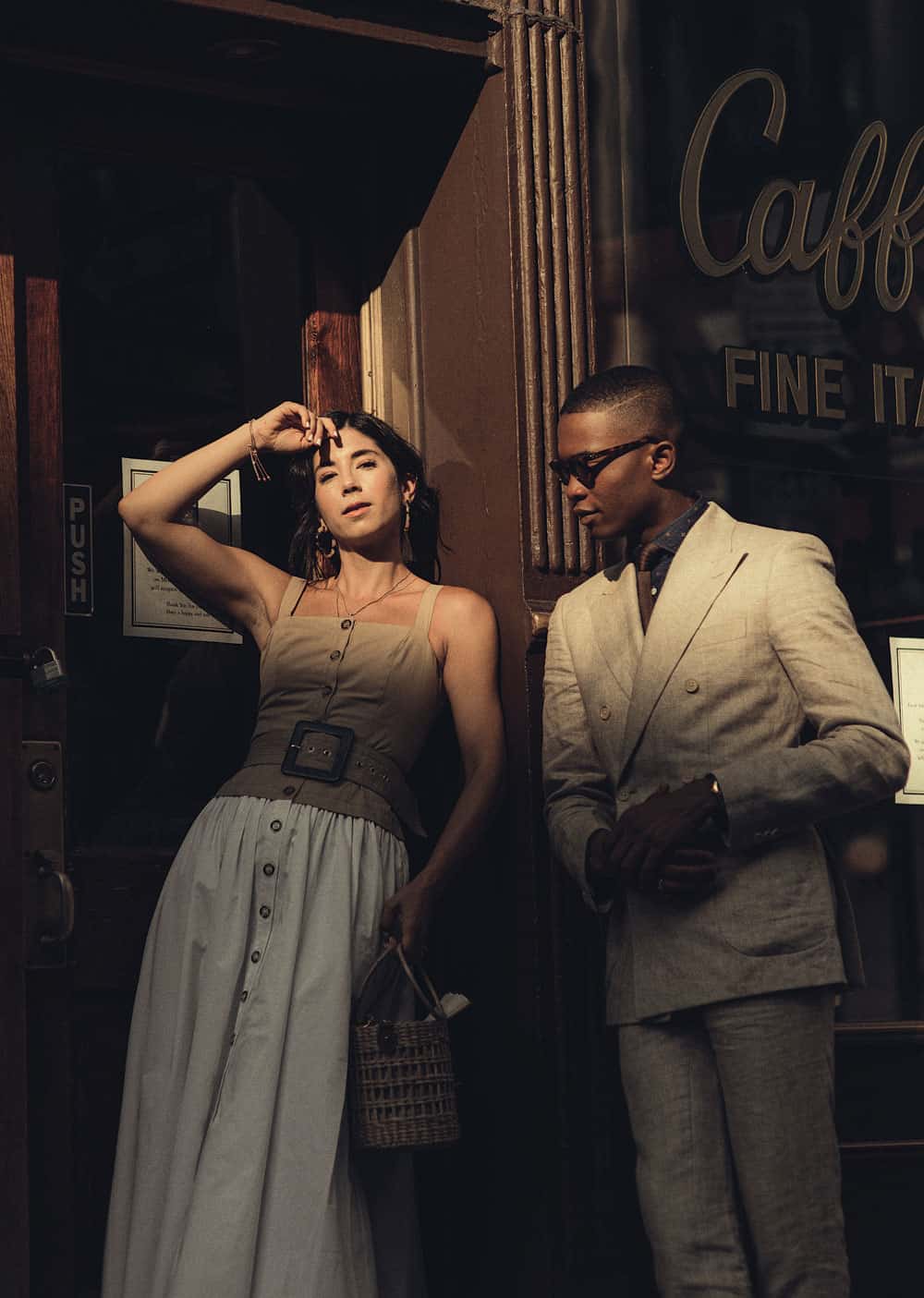 How did you come up with the idea for these cinematic shoots?
Krystal: I’ve been a longtime admirer of both Igee’s and Grant’s work, long before I met and collaborated with either of them. I think what’s always drawn me to their respective styles is how well they evoke a rich, complex story in a single photo. Given that so much content these days is produced at a whirlwind speed, I fell in love with the fact they both look to tell an in-depth narrative in each image; an ethos I very much try to incorporate in my own work.

Igee Okafor: Krystal and I met a few years ago and I believe one of the things we bonded over was our mutual love for Old Hollywood classics, which came into conversation due to the kind of social content we were creating separately at the time. It wasn’t until a year later [that] Krystal decided it was time to take a stab at recreating some of those classics. I believe the first one we did was Funny Face from the 50s with Audrey Hepburn and Fred Astaire. We discussed who we’d like to shoot the images and Krystal suggested Grant Legan.

What was shooting together for the first time like?
Okafor: Recreating Funny Face was a two day shoot. We shot at a studio in Chelsea and in Washington Square Park the next day. It was a very seamless interaction with all of us. Krystal was magnificent to work with in all her magic and Grant was so gracious and effortless in his direction and ability to draw the character out of us as his subjects. The content did relatively well on social media, in terms of the reaction, and we decided to continue to work together if we came up with more ideas along the same strand.

Bick: It was an extremely rewarding two-day shoot, as we ran around New York in the cold of January recreating different pockets of Paris, resulting in some of my favorite images to date. It’s since become an ongoing series for the three of us.

Do you ever feel like maybe you were born in the wrong era? 💫 I do all the time. (And yes, on a semi-related note, our Funny Face series is coming to the blog very soon!) // 📷 by @grantlegan, accompanied by my very dapper Fred Astaire @igeeokafor #funnyface #audreyhepburn #fredastaire #classicstyle #tttclassics

What is it that you enjoy about recreating these timeless movies?
Bick: I suppose what I find most rewarding about this series is the ability to take classic narratives and turn them on their head a bit: to modernize a familiar storyline for a new audience to fall in love with it. So much content is produced at a whirlwind speed. I fell in love with how Igee and Grant both look to tell an in-depth narrative in each image; an ethos I try to incorporate in my own work.

How do you scout for the perfect locations and outfits?
Okafor: Typically, Krystal leads the location scouting. I applaud her for committing to storytelling as authentically as we can. Usually, she comes up with a fantastic idea of where to shoot the images and after we capture, we freestyle after that with Grant’s direction.

Bick: Once we’ve confirmed the movie and specific scenes, it’s a lot of mood boarding, image sourcing, and location scouting. I also rewatch the movie many times beforehand. I love location scouting! It’s my guilty pleasure, and is the perfect excuse to explore parts of NYC I haven’t seen.

When your morning commute looks like a scene from The Talented Mr. Ripley, it would be a shame to not dress the part, right? #StellaArtoisPartner Huge thanks to the @stellaartois team for inviting us out on their East River Riviera boat ride experience yesterday! What an unforgettable way to take in the views of my favorite skyline in the world — see more of the fun on stories now! #SummerLikeVacation

Okafor: When it comes to fashion and accessories, we draw inspiration from the characters we are channeling. Sometimes, we keep it traditional but other times we try to modernize it, highlighting what those characters would probably look like today. A lot of the clothing, if not all, comes directly from our personal closets.

Bick: Sometimes we pull samples from local designers and/or vintage stores to complete the look. I tend to think most of the magic happens though when we get on set and we’re reacting to an ever-changing New York environment. Grant is extremely talented at directing and without fail, will always find the perfect light (an element that no matter how much you plan in advance, is really hard to predict.) But he rolls with it so well, treating it like another character almost in the image.

Grant, what do you love about the shooting experience?
Legan: The ability to create a modern twist on these old classics. I really enjoy working with Krystal and Igee and turning them into characters in these films. It’s like being inspired by a moment in the film, and using what I know about who they embody on their social platforms and creating a character version of them together. I am very much inspired by characters, in movies and in life. I think we all embody a different persona depending on our situations and I love bringing that out in these stills. Mixed with Krystal’s location planning and both of their unique romantic wardrobe style, it’s almost as if we’re working on a movie of our own. I live for motion and what I love about photography is freezing a moment in time, so what a joy it has been to be inspired by classic movies from over 40/50 years ago, and bringing in our own modern twist.

Sabrina Fairchild: All night long I've had the most terrible impulse to do something. Linus Larrabee: Oh never resist an impulse, Sabrina. Especially if it's terrible. See more of our second installment of Sabrina over on the blog today — direct link in bio! // 📷 by @grantlegan, featuring the always handsome @igeeokafor and @drewjessup as Linus and David Larrabee, respectively #tttclassics #audreyhepburn

Any especially memorable shoots thus far?
Bick: We couldn’t help but laugh for most of the Roman Holiday shoot. It was the thick of summer, so the only time we could shoot without sweating profusely was early morning, before the city was really out and about. We shot on The Met steps, to mimic the Spanish Steps, with a loaned Vespa neither of us knew how to drive; at the New York Public Library, to mimic the Trevi Fountain; at a café in the heart of Little Italy; and at a gelato shop, because it would be criminal not to include some gelato!

Okafor: Well every moment on set with Grant and Krystal is very memorable. The camaraderie between all three of us is something I really cherish and look forward to. Essentially, we get to be actors when we recreate these movies in the sense that we are portraying certain characters in order to tell a specific story that doesn’t necessarily relate to us. A theme has to be conveyed that is believable in its quality and atmosphere.

What cinematic scenes do you plan to recreate and shoot next?
Bick: We have a long working list, but among the top contenders we have West Side Story, Rear Window, and An Affair to Remember.

Garrett Swann Teases the Details of His New Fashion Project

Why Kaye Bassey is Your New Favorite...