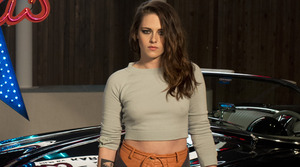 Howdy, Kristen Stewart! The Twilight star gets a very plum gig as the face of Chanel’s upcoming Métiers d’Art Paris-Dallas collection. She was in Dallas, Texas yesterday to watch the unveiling of the collection that also brought Anna Wintour, Lauren Hutton, Zoe Kravitz, and Dakota Fanning to the rodeo. The ads will appear in 2014 and will (obviously) be shot by Karl Lagerfeld. She has previously fronted for Balenciaga’s Florabotanica perfume.