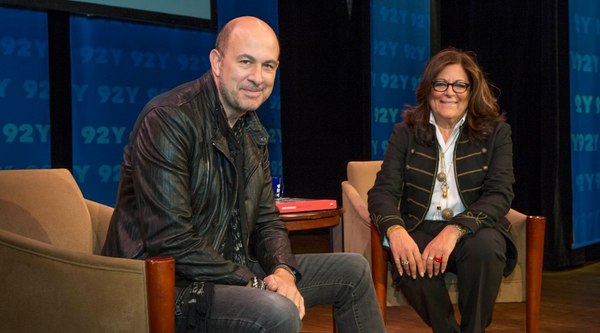 (NEW YORK) The Upper East Side got the John Varvatos rock ‘n roll treatment last night, as the menswear designer sat down with Fern Mallis at the 92Y. Opening this installment of her “Fashion Icons” Q&A series, the hostess of the eve remarked: “If I would ever agree to have a blind date again in my life, and the door opened [to] the man wearing John Varvatos, we’d be off to a great start.” Beginning at the designer’s start in Detroit and touching upon his stints at Ralph Lauren and Calvin Klein, there were plenty of fun tidbits from the chic chat.
BY DENA SILVER

A CHILDHOOD SPENT IN DETROIT:
On dressing for the ladies: “When I was in seventh or eighth grade I had this sweater with a star on it. I wore it to class one day and one of the girls I had a crush on told me how much she liked it. From that moment, I really had to think about what I wore to class. It was all about the girls, for sure.”

His hangout during his younger years: “I used to go down to my basement, put headphones on and listen to music. It was my little ‘boy cave.’ I listened to rock ‘n roll from the time I was seven or eight years old; I started with the Rolling Stones and The Who.”

Keepsake alert! He still wears the first leather jacket he ever bought, from Detroit-bred leather brand, Buco: “I actually almost wore it tonight! It’s my favorite piece I’ve ever owned, and it still fits me. It was black, but today it’s kind of grey because it’s all faded and the leather is cracked.”

On his own band, The Golden Sounds, and their eclectic manager: “It was with my cousin Tim on the drums and Uncle Gus [the manager], who thought we were going to take him right to stardom. He would wear this electric blue sharkskin suit. Now, my design team and I will look at a fabric and go, ‘This is an Uncle Gus fabric.’”

The moment he thought he’d finally made it big: He had just been asked to take over the sales force for Polo Ralph Lauren in all of New York. He mused: “That’s the year I thought I would be retired by the time I was 40.”

The first lesson he learned from Ralph Lauren, at “Polo University”: “The bar is never raised high enough.”

How Calvin Klein boxer briefs came to be: Varvatos cut a pair of long johns into shorts and, as they say, the rest was history…

Work life at CK during the Marky Mark era: “Mark Wahlberg was wearing boxer briefs everywhere: on billboards and planes. It just shows you [that] when things catch on, they really can catch on. I call it the Dow Chemical explosion of things happening.”

THE JOHN VARVATOS ERA:
The lightbulb moment: “In 1999, I was walking through Barneys on a Sunday and there was a lot of black. And I thought it was a really great time to do something different and change it up.”

…And the fateful phone call that followed, the very next day: “I went into my office to make a call, and there was a voicemail from the person I was going to call saying ‘Just thinking about you over the weekend. If you’re ever interested [in starting a brand] we’re here waiting for you.’”

His Madison Avenue store hits close to home: “I thought it would be great to do something like an Upper East Side apartment. It’s sexy and elegant, but still has a bit of an edge to it. It was really designed after Joyce [his wife] and my apartment; it has a lot of the same elements and color schemes.”

On feeling youthful: “I feel half [my age], for sure. We have a lot of people in my company today, and I always say that I have more energy than all the young people that work around me.”

Using rock royalty in his campaigns: “Models make more than what we pay [the rock stars].”

On his car creation for Chrysler: It wasn’t even supposed to be produced; it was just made to show off at the New York Auto Show. They ended up making 1,000 cars, which sold out instantaneously.

The short answer he’d ever venture into women’s wear: “Maybe…”