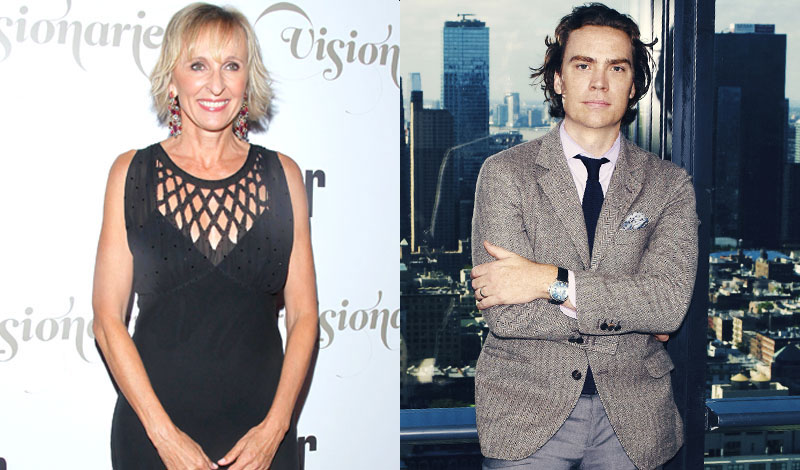 Taking off soon at a newsstand near you: the rebirth of Town & Country Travel, spearheaded by T&C proper’s newly minted travel editor at large,  longtime Condé Nast Traveler EIC Klara Glowczewska, as announced last week. The Hearst title’s travel spinoff debuted for the first class set back in fall 2003 and shuttered in winter 2008. Another glossy heavyweight joining the team at Town & Country in the brand new role of architecture and design editor? Pilar Viladas, previously design editor at T: The New York Times Magazine. Also of note in the T&C orbit: a pair of senior editors, Stellene Volandes and Mary Kaye Schilling,  got bumped up the masthead. The mag’s EIC, Jay Fielden, gave us the scoop on the redux of Town & Country Travel, why he added an architecture and design ed to the mix, who’s lucky enough to be his  plus-one at next month’s Couture shows, and much more. Also: Glowczewska gave us a ring to discuss the new gig and life after Condé Nast Traveler.
BY ALEXANDRA ILYASHOV

Do you and Klara have much of a history, Jay?
We’ve  known each other for some time. When I was a pipsqueak at The New Yorker, she was an editor there; I got to know her a bit. Then, when I was at Men’s Vogue and she was at [Conde Nast] Traveler, we knew each other, too. I’ve always respected her as an editor and writer.

Why is this the right moment to resurrect Town & Country Travel?
It’s a deeply important topic to our readers. I’ve known that since the day I arrived. Covering travel aggressively and ambitiously is part of the magazine’s heritage, and it had a standalone travel magazine for five years. I want to do travel in a way that isn’t simply based on press releases, or anecdotal evidence about what’s “nice”. I wanted somebody who really knows the industry, has traveled all over, and has lots of frequent flier miles. It was a serendipitous that as we were thinking about [relaunching], Klara was available.

Had you wanted to work with Klara in some capacity at T&C for awhile?
Well, I certainly wasn’t going to hire her away from Conde Nast Traveler! I obviously keep abreast of what’s going on out there [in media], so when you see a super talented person who might just happen to be available, you have to act fast. I clearly acted very fast—otherwise Klara would probably be somewhere else. Klara will approach travel in a literary and somewhat eccentric way. It’s taken a while to find the right person.

Is Klara in the office daily?
Not every day, but she’s here a couple times a week. She’ll be travelling a lot, so she can’t be in her office! We started working together beginning of the year—she did a great piece on Greece for us in the March issue.

How frequently will the rebooted mag hit stands?
We’ll start out doing it twice a year. It’ll launch at the end of this year. Next year, we’ll do two issues—one in the fall, one in the spring. It’ll go to every subscriber, starting in October, and will also be on newsstands.

Holiday is making a comeback, too. Competition much?
Well, [T&C] owns Holiday so it’s interesting that it’s being relaunched in England. The copyright laws, as complicated as they are, probably allow them to do it there, but Holiday  has a very important relationship to Town & Country.  I think they’ll have to struggle with figuring out how to interpret a brand that is actually very intrinsic to who we’ve been for the last 50 years. Holiday in England is not going to pose any competition for us. Frank Zachary was Town & Country’s editor for almost 20 years in the ‘70s and ‘80s, and he was the art director of Holiday. We have a full run of its entire life in the archives here. It was a very considered, literary magazine that looked fantastic and read very smartly. That’s what we’re aiming for, too.

Will you staff up to produce T&C Travel?
It will certainly be produced by us as editors, and we’ll see where it goes. T&C is at 10 issues a year, so to add those two extra issues on keeps us at a pace we’re used to. Klara is certainly opening up her rolodex to bring on expertise and great travel writers. So a number of people contributing aren’t “on staff,” but that’s not so different from the voices in the magazine who don’t sit on the floor for month in and month out.

What kind of traveler are you?
Ha! I try to be a great traveler, but I unfortunately have this day job keeping me at my desk. I take advantage of travel I’m required to do, like going to Europe for the shows a couple times a year. There’s always a bit of time between shows to run off to another corner of Europe. I’ve done that many times.

That’s a good problem to have, no?
It is, it is. I feel like I’m quite an expert in Europe, I can tell you that. I’m actually taking my eight-year-old daughter to the Couture shows with me in July in Paris.

How chic.
She’s ready not to eat macaroni and cheese and chicken fingers in another country. Now that she’s kind of over that phase of her diet, I can actually take her some place where that’s not on the menu.

Let’s discuss another major recent hire, Pilar Viladas. Did you poach her from T?
Isn’t poaching illegal? I can’t admit to any crimes on the phone! She’s somebody I’ve known for some time, too. Not extremely well but I’ve always admired her, and our paths have crossed in numerous ways. Again, being somebody who pays attention, I saw that she might be available. We started talking six months ago. She has amazing taste and connections. Pilar, along with Jay McInerney, and Klara, are the kind of contributors we really need; that the title really deserves.

Have you wanted someone on this beat for awhile?
I’ve been wanting something like this since day one. But obviously you have to pick priorities. I have a long list of things I still want to tackle.

You also had some recent promotions: Stellene Volandes jumped from style director to executive style director, and Mary Kaye Schilling was bumped up from culture editor to deputy editor.
Stellene has been here since month after I got here, and she is a fantastic editor across the board. She understands fashion and jewelry in her sleep, but she also really understands the tone of the magazine. She has a great grasp of important figures in society, and she’s just a fountain of ideas. She’s a kind of very exceptional editor. Mary Kay is new to the staff, but a great discovery. She’s very deeply experienced in Hollywood and celebrity. I’ve got a great group of people, unlike ever before.

PLUS! Klara Glowczewska dishes on her new gig, what it’s like to read Traveler these days, and her strict packing pointers…

After Condé Nast Traveler, what did you have in mind for your next job?
I honestly didn’t know. I had been there for such a long time—gosh, 26 years! It takes a while to get used to new circumstances. I was a child prodigy when I started. [Laughs] So I was just exploring various options, talking to a lot of people. It seemed that Jay had a real need at this moment for someone with my background. I was happy to do this.

How will this role differ from being EIC?
This position will definitely give me editorial authority, and some autonomy. It will also let me be more out in the field for a while, which is a nice change. I love to travel. I’m a total enthusiast for the topic, so I’m really welcoming the opportunity to do that more.

Got any destinations in mind yet?
Oh yeah, I’ve got a notebook of ideas! It’s a big world and there are still a lot of places I haven’t been.

How similar will the revamped T&C Travel be to its erstwhile original?
There was an emphasis on very good writing and amazing destinations in the original Town & Country Travel, which will definitely be there in new version, but magazines are all about evolution. This will be an entirely new magazine. I don’t want to get into specifics: with any new publication, be it a relaunch or just another issue, you want this element of surprise.

How do you feel about T&C’s audience?
The Town & Country reader is a very interesting readership to edit for. They’re very affluent, discerning, demanding, sophisticated. This is a huge opportunity to deliver a travel book that is going to scratch those itches for them.

This is a print-centric new gig. Did you ever consider trying something primarily digital post-Traveler?
Yes, I most definitely did. I am indeed working on a project; I’m not at liberty to really talk about it. All digital things require massive funding to really get off the ground. I may do this [idea] one day in the future. I may not. But it’s certainly interesting. The digital side of things is fascinating.

What is it like to nab a Hearst gig after spending so many years at Condé Nast?
I’ve only just started to come into the office sporadically, so I can’t say yet, but the building is gorgeous. I love walking into the Hearst Tower—and I love the cafeteria. It’s exciting to be a part of another big media company; it feels fresh.

Have you read Traveler since being EIC?
Oh, sure. I read all the travel magazines. I love the topic. I’m always interested in what other people are doing with the topic, how they’re approaching it, what they’re writing about.

What your best trick for traveling wisely?
I hate luggage! When I have a big suitcase, I feel incredibly depressed, like I’m lugging something around that I shouldn’t be. Anytime I pack for any trip, anywhere I go, I strive to have one really light bag. It’s very hard, but I urge any frequent traveler to do that.

Wait, just a single bag? For every journey?
One bag. Light. Things you can reuse. The last thing you want is to be in your hotel room every other night repacking your suitcase. That’s a nightmare!