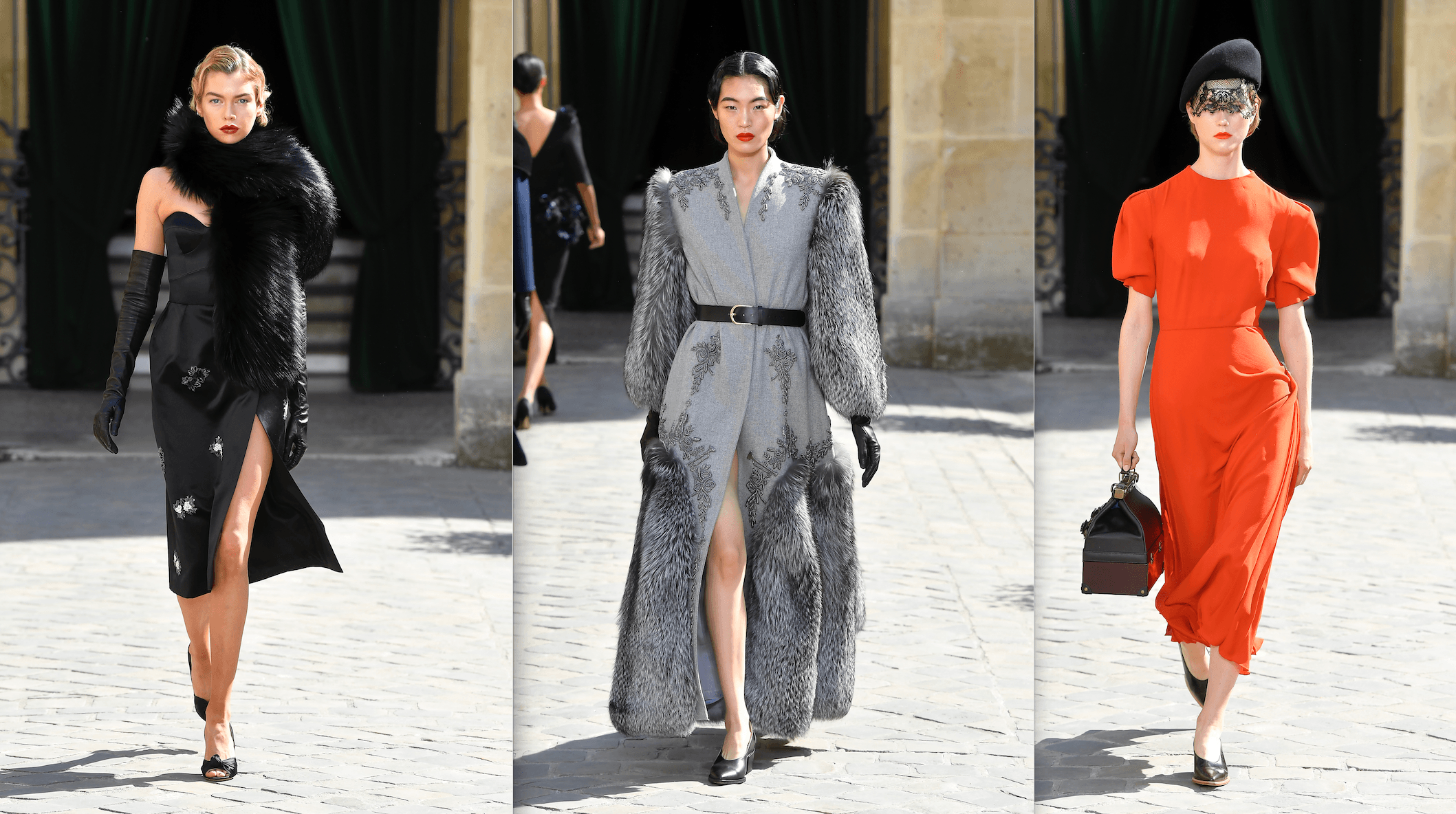 While those of us stateside were celebrating the 4th of July, fashion editor-at-large and stylist Sofia Achaval de Montaigu was living the glamorous life front row at the Haute Couture shows in Paris. Some of the highlights? Versace’s ultra-chic collection inspired by Steven Meisel’s ads for the brand in the ’90s, Dior’s 70th anniversary exhibition, Alexandre Vauthier’s Bella Hadid moment, Ulyana Sergeenko’s strict ’40s glamour, and more.

I went to see the presentation of the Versace Haute Couture collection, which was outstanding. On the second floor of the Versace boutique in Avenue Montaigne they had all of the dresses displayed on mannequins. The first look that caught my eye was a catsuit embroidered on a stretched jersey base. It looked like golden armor, but it was completely soft to the touch. The inspiration for the collection was from the Steven Meisel Versace campaign from the ’90s and the Chimaera from Greek mythology. I’ve never seen so much embroidery, design and structure on a dress—they were like sculptures. Many of the dresses were short, and the large shoulder shape gave a modern feel to couture. Each one of them was spectacular and every dress had a story about how it was made. It was very nice to see the dresses up-close and to be able to see the details and work behind each one of them.

The Dior exhibiton at the Musée des Arts Decoratifs was to celebrate the 70th anniversary of the House of Dior. Their was a selection of the gowns designed between 1947 to today. When I entered I said hello to Peter Philips, the creative and image director of Dior makeup, whom I know from the time I was a model and was shot by Inez Van Lamsweerde and Vinoodh Matadin. The space was one of the most breathtaking spots for a cocktail party. Behind the museum there were gardens that felt fit for Marie Antoinette, full of flowers and small trees. It was magic.

I chatted with my very good friend Vanessa Seward and her husband Bertrand Burgalat. I used to work for Vanessa when she was the creative director of Azzaro. She was wearing a beautiful printed dress from her collection and looked stunning. 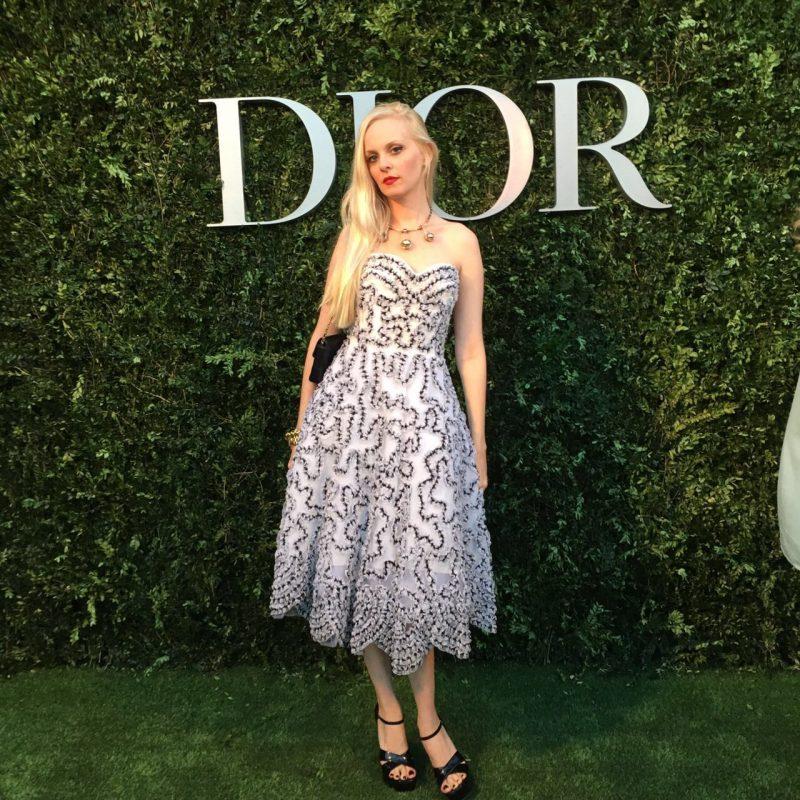 From there we went to Fabrizio Vitti, a new shoe collection presentation, with a dinner outside on the terrace at the Hôtel de la Païva on the Champs Elysée. My friend Alexia Niedzielski hosted the party. We had cocktails, we sang karaoke, and had lots of fun. The collection was perfection. My favorite shoes were the sandals with the marguerite flowers.

The day started with a Schiaparelli re-see at the showroom at the Place Vendôme. It was a beautiful summer day and the sun was shining—a perfect day to see couture. The collection was inspired from the paintings of Picasso’s Cubist era and Rothko. One of the tulle dresses combined its soft movement with intense colors, just like the Rothko paintings. The collection had many trompe l’oeil details, one of my favorite was the tulle gloves with red embroidered nails. Another look I liked was a tulle bodysuit with embroidered necklaces, bracelets, and a watch. I love seeing how fashion can be fun and incredibly beautiful at the same time. I always enjoy going to the Schiaparelli showroom. I feel like a little girl playing with dresses. The last room was my favorite…full of my dream dresses to get married in again! All made out of white tulle, they felt so comfortable and light, just like a cloud in the sky.

From Schiaparelli,  I walked next door to the Alexis Mabille show. It took place in the Hôtel d’Evreux. The space was like a palace, with spectacular rooms and very high ceilings and golden tapestries on the walls. The dresses were exhibited in four different rooms. I met Alexis, who explained to me the work that was done in a golden coat that had big golden flowers with crystals. One of my favorite looks was a red cape made out of silk and a silver dress with large ruffled sleeves.

The show took place at the Lycée Henri IV. I always dreamed to see this building, which is home to one of the most prestigious schools in Paris—my husband used to study there. The space has a garden in the center, also perfect with the sunny day and warm weather. Sitting right in front of me on the other side of the catwalk in first row was one of the actresses in Orange is the New Black, Jackie Cruz. I also said hello to my friend Chufy [Sofia Sanchez de Betak].

It was nice to see all the Russian girls at the show and how they have fun dressing up and enjoy fashion. Natalia Vodianova was there, too.

The collection was inspired by the ’40s when the Soviet cities became a playground for the black marketers and then expanded with nods to the criminal life of New Orleans, sleepless New York, and Chicago. Mixing everything from Al Capone and street punks to burlesque divas and Michael Jackson. The silhouette was the strict elegance of the ’40s, masculine and feminine juxtaposed in a glamorous way. The soundtrack of the show left me feeling like I was in an old Hollywood movie. I really enjoyed the ride.

The Alexander Vauthier show took place at the Grand Palais, close-by to where the Chanel show was that morning. When we entered the room we felt like we were in a disco with the pink moving lights and loud music. We all felt like dancing.

Bella Hadid opened the show and looked stunning. She was wearing an ’80s-inspired look: black pants, pink shiny boots, a transparent long-sleeved top and a small black hat. She was the star of the show.

The rest of the looks also had a strong late-’70s / early-’80s vibe but with a modern shape—very short dresses, high-heeled shiny boots, and jumpsuits. You could feel the models felt confident, strong, and sexy.

After the show, we went to the Chanel Gabrielle perfume party at The Palais de Tokyo. We had dinner there and waited for the Pharrell Williams and Katy Perry concert to begin. In the meantime, we had our pictures taken in a gigantic white box filled with the scent of the perfume. It was like being inside the bottle. It was a fun end to the evening with friends, drinks and dancing!

Tommy Hilfiger Is Collaborating with Vetements