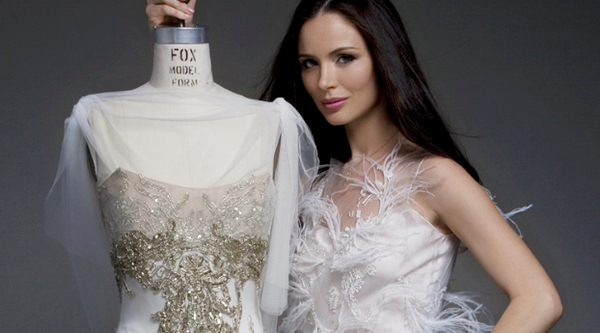 (LOS ANGELES) Women dream about wearing Marchesa’s fantastically intricate gowns. It’s one of the reasons the eveningwear brand has maintained such red carpet clout amidst powerhouse brands like Dior and Armani. Since the beginning, they’ve dressed everyone from industry icons like Renée Zellweger and Sandra Bullock to new powerhouse Kerry Washington. Georgina Chapman filled us in on what it takes to make red carpet magic.
BY PAIGE REDDINGER

Who was the first celeb to wear Marchesa on the red carpet?
Renée Zellweger wore it to the Bridget Jones: The Edge of Reason premiere in England. It really was a moment. I remember waking up the next day and there she was in every newspaper and there was the name, Marchesa. It really was an “Aha!” moment about the power of the red carpet.

Did you fit her personally?
Yes. Renée is who really taught me about how to work with an actress and about the red carpet. She was very kind and she really went through what it was she was looking for and how it would read in a photograph. She wanted to feel secure on the red carpet and see how the dress moved when she walked. It was really about seeing a dress from a different angle. When you’re designing for the catwalk, you don’t necessarily think about these things.

How did you get her to wear the dress?
We enlisted the help of Nanci Ryder, her publicist in L.A. We knew we wanted to get somebody on the red carpet, because we couldn’t afford to advertise at the time, and we were looking at those weekly magazines when I first started Marchesa and thinking it would be a great way of getting the name Marchesa out there. We showed Nanci the clothes we had and she said, “I have a client going to a big premiere. If you want to submit some sketches go ahead.” Renée ended up choosing two of them. We made two or three for her. She took a chance on us so we were very grateful.

How have you built other celebrity relationships?
After Renée, we came out to L.A. and we brought all of our dresses out and set them up in a suite in a hotel and invited all the celebrity stylists and started building relationships. Then we started sketching for them, and the rest is history.

How often do you make custom pieces?
In the beginning we weren’t doing a runway show. We were only doing one-off pieces. Now we have runway so a lot of times dresses are taken straight from the runway. For example, Kerry Washington texted me after the Spring/Summer show and wanted to wear a dress to the Emmys and she wore it that weekend. We sent it straight out to her. Or, it could be that we sketch. It’s really every which way.

What lengths have you had to go to in order to get a dress to a celebrity?
I’ve gone to make sure gowns fit them right before they go on the red carpet. I’ve gone to some stars’ houses personally. I turned a cocktail dress into a gown in two nights. I had people working through the night on Sandra Bullock’s dress she wore in 2010 when she won best actress for The Blind Side. It had so many beautiful beads and it was a complex dress so we had shifts, but it’s so worth it in the end.

What happens when you put in hard work on a dress and they don’t wear it?
If I choose to make the gown knowing that it’s not a 100 percent guarantee they’ll wear it, then it’s something I know about in advance so I’m fine with it. But more often than not they might call back that same dress for another event or someone else might wear it. It’s the nature of the game. I’m a woman so I understand. You can plan an outfit the night before and you can wake up and you might not feel right in it. These celebrities have to walk out literally in front of millions of people scrutinizing them and pulling them apart from every single angle. That must be incredible pressure for anybody.

Do you ever have celebrities that come to you without a stylist?
Blake Lively will text me directly about a dress. And she’ll often say, “Oh can I keep it? I have a couple of events coming up that I think it would be perfect for.” She does it all by herself. She’s very cool like that.

What is your schedule like pre-awards season?
This is probably our busiest time, because we have our show in between and I’ve just come back from London, because we had the BAFTAs there, and we’re fitting for all the awards and I’m now fitting for bridal. It’s always busy. And then you know, the nerves…because I do get nervous about it all.

How many dresses do you loan to women during pre-awards show?
You want to stick with a couple of people that you think might wear them, but I might send multiple dresses to one person. Right now, for example, we have sales going on so we’re trying to balance having the dresses with stylists and having them at sales appointments. Because of the nature of our dresses, we don’t have multiple samples.

Is there anything that you would like to see change in the world of celebrity dressing?
Yes, I’d like to see everybody wearing Marchesa!

Lupita Nyong'o Has Her Lanvin Moment

From The Daily's Hollywood Issue: Head Over Heels For Stuart Weitzman

Sandra Bullock! The Obamas! Sightings from this...