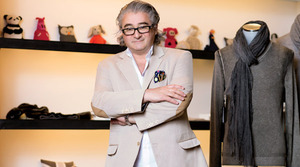 (NEW YORK) In a retail scene known for one-season wonders, charmingly English cashmere kingpin Christopher Fischer reigns supreme. He’s been plying the Hamptons crowd with his sumptuous creations for nearly 25 years, and knows a “stacker” when he sees one. BY ALEXANDRA ILYASHOV

Is it hard to sell cashmere in the summer?
Oddly enough, summer is our busiest time. We’ve got an extremely loyal following out here. A lot of what we call “stackers.” They walk out of the store with a whole stack of knits, often the same item in different colors. They keep one in the Hamptons and one in the city.

Which styles move the fastest?
The easy, everyday ones. A boyfriend-style V-neck will always outsell a more fashion-y piece. Also, our blankets. I mean, you can’t beat traveling with your own cashmere blanket!

What about colors?
It’s all about brights. The brighter, the better. We’re known for our slightly unusual shades.

You’ve got stores now in East Hampton and Southampton. Who buys more cashmere?
East Hamptonites, definitely. It’s always been that way. Seems like people also gravitate there to shop.

Do you remember your first visit to the Hamptons?
Of course! My wife, Joni, and I visited in the mid-Eighties, before we were married. The ocean! The dunes! The hedgerows! It’s striking. I was very much in love.

What do you do off-duty?
Read books and try to relax! We really enjoy cooking. Getting a reservation in the Hamptons is impossible, anyway. I also collect wine. I’m very connected to Hamptons vineyards. Roman Roth [of Wölffer Estates] is a good friend.

When did you open your first shop?
Soon after we moved to New York from England in the late Nineties. We were parking in Southampton, and this guy literally put a “for rent” sign on the door as I was reversing the car. We hadn’t planned to open a store out here, but I got out and asked him about the space. It was on a whim!

Was it hard to lure in customers?
Even while we were setting up, people knocked on the door asking if we were selling. We were new to retail, so at the beginning we couldn’t keep enough stuff in stock. It had been so good in Southampton, we decided to open an East Hampton location, too.

Where are your other outposts?
We have two stores in New York, and used to have a store in Greenwich, but we’re now looking for a slightly smaller location—it was a bit too big. We have another major project in New York for 2015, as well, but I can’t say what it is just yet.

How’d you get into the cashmere business?
In the late Eighties I was consulting for a Japanese manufacturer that was doing a joint venture in China. Mongolia has some of the best cashmere in the world, so in the early Nineties we sold our Scottish factories and moved everything to China. Everybody in Scotland and Italy at the time thought China’s cashmere wasn’t as good, but in reality most of the cashmere fiber in Scotland and Italy was already coming from Mongolia.

What was happening back then design-wise?
Up to that point knitwear had just been classic sweaters. But London had a whole different group of designers, of which I was one, doing hand knits, chunky knits, and bright colors. Normally cashmere is two-ply; I designed a whole line of three-ply, in three different colors. And that’s how I got started.

What was your distribution like?
About 80 percent export and 20 percent U.K. sales. The business of private label manufacturing for department stores in the States was just starting to happen then, too. We showed Saks and Neiman Marcus what we were doing and gained traction very quickly.

What happened next?
In 1993, we changed the production base and headquarters, since we were spending so much time in the States. There were a few years of change, and in 1996, we became a U.S. corporation and relaunched the collection.

What are your expansion plans?
We’re actively looking for new locations on the West Coast. We’re not looking to be on Melrose, or anything. Our customer is more neighborhood-y, like Laguna Beach. We have a tremendous following out there.

Why do you think that is?
They have cashmere weather! It gets a little chilly in the evening, and restaurants have freezing A.C. so little cardigans and cover-ups are very strong sellers.

Any other places you’d like to open?
London. Eventually we want to open in China, too—it’s on everybody’s list! We’ll also be partnering with Chinese websites to test the market before we launch there.

What else is new on the digital front?
We’re about to launch a new website, which will have its own flash sale section. It’s going to be very different than anything out there.

Loro Piana just got some major LVMH love. What would you say if they came calling?
We’ve been approached by different people over the years, which is always flattering, but there are such horror stories of people getting kicked out of their own businesses after selling. We’ve always expanded a little conservatively. We’re this small, private company with two shareholders. But never say never! There will come a point when I want to withdraw and retire. I’ve got a lot of other ideas of what to do in my life, and I’m still a long way from the bottom of the list.

Finally, were you aware that you share a name with a famous shark hunter?
I was not, but I would certainly like to go shark hunting! That would be a great.

From The Daily Summer: Bartender Babylon