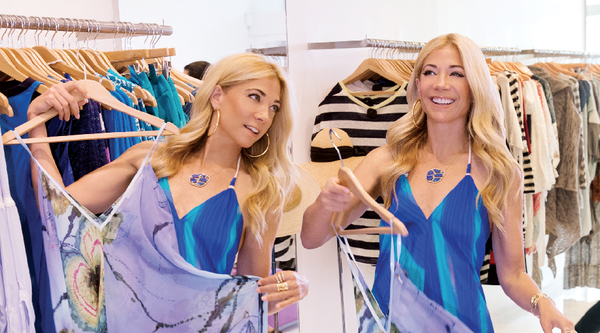 (NEW YORK) When she isn’t maintaining her fit bod at SoulCycle and Barry’s Boot Camp, shopping in East Hampton, or throwing the best parties on the East End, busy mother-of-three, Ramy Sharp is building her Ramy Brook clothing empire of sexy and simple day-to-evening looks. We caught up with the designer at Scoop and her pal Allison Lutnick’s sprawling Bridgehampton estate.
BY PAIGE REDDINGER

You’ve been a Hamptons regular since your 20s. What’s so great about Bridgehampton?
I met my husband out here. We both had share houses. For years we would come out here so we always knew we wanted to buy a house. In January of 2000 we decided we wanted to buy so we called the builder. He had three properties at the time and this was one of them. We just kind of got lucky because we’re in such a central area. We’re in Bridgehampton, but we’re near everything from Southampton to East Hampton to Water Mill. And since we built the house this area has gotten so built up.

How often do you come out here?
Not as often as we’d like to anymore, but we’re out here most of August and holiday weekends. It’s also really pretty out here in the Fall. When the kids were younger we were out here every weekend and I would move out here all summer. But now that they’re older they are in camp and I’m busy working. My life has changed.

What’s a typical day in the life of Ramy in the Hamptons?
I get up and I answer a ton of emails. That’s the first thing I do. I have coffee and then I go to my workout at either SoulCycle or Barry’s Boot Camp and then I usually grab coffee with a friend at The Golden Pear. Sometimes we’ll have a bite to eat. I’m usually starving after. I’m typically there for about an hour or two and then we’ll usually go shopping in East Hampton or Bridgehampton. You might ask when a shower comes into play.

Both of those places are quite a scene.
SoulCycle is definitely a scene. Barry’s I’m sure is a scene for some people, but it’s not as many. I’ve been going to SoulCycle since it started. I know the owners. The first one was on West 72nd Street in the lobby of a building! Elizabeth and Julie have also been so supportive of me starting my business. I started a couple of years after they opened. It’s exciting when you see other women starting these businesses later in their life.

What are your favorite restaurants in the Hamptons?
I love Robert’s. They have really, really amazing food and if I want to go for casual sushi I go to Yama Q. But my husband is an amazing cook so he’ll also make great meals at home. Whenever he cooks I try not to snack all day. He’s great with Italian food. He makes the most insane meatballs, but sometimes when I’ve hit the wall and feel like I can’t eat like that anymore he’ll make salmon on the grill or chicken and a salad and he promises me there’s no fat in it so I scoff it down!

Where do you like to go shopping?
I love Maison 24 and Jennifer Miller, who is a good friend of mine, great jewelry, and she’s even got great home gifts. She has great taste. It’s always fun to go into Scoop, too. They also have a men’s department so I like to get my husband stuff there and my kids. My son has already grown into menswear and he loves it.

Do you ever check out your own merch at stores?
Yes, definitely. I take pictures of it and I Instagram and Facebook it. That’s the world we live in these days. I have pieces specifically made for stores like Scoop or Blue 1 where I also sell. So if my girlfriends want something they have to buy it there unless it’s on my website. People generally want stuff immediately out here, because it’s a limited window and they want it for that daytime or nighttime party, lunch, or Sunset Beach. I kind of imagine my cover-ups on all the girls going to Sunset Beach.

Are you surprised by how much your business has grown?
I’m very happily surprised! I always felt like I needed something cool and sexy to wear with jeans. I felt a lack in the market myself unless I was spending on high-end designers, which I still love to do, but I was still going to my closet and I couldn’t find anything. I guess a lot of other women felt the same way.

How do you choose the fabrics?
Well for nighttime I like a silk charmeuse and I like a stretch. It’s just easier to put on your body and it’s more comfortable. I’m just getting into prints for my ready-to-wear. I call them non-print prints because they blend in. You can get away with wearing them more than once without someone noticing. Of course, I love big bold prints for cover-ups.

Palm Beach Gets A Dose Of Jimmy Choo