From The Daily Berlin: Ginger RuÃ©tz 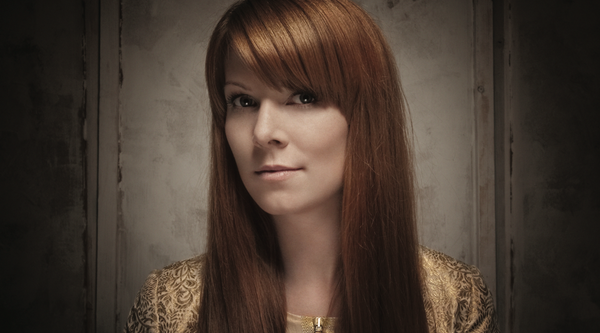 (BERLIN) Flame-haired Austrian designer Rebekka Ruétz, 28, got her start with prints master Peter Pilotto during a stint in London before debuting her eponymous line three years ago. In the six seasons since, she’s gone from black-on-black chic to Hunger Games glam. Next up? A capsule line of coed tees and a foray into menswear.
BY ALEXANDRA ILYASHOV

Where did you get your start?
I studied in Munich at the Academy for Fashion Design. After graduating I just decided to go to London. When I got there, I popped into Peter Pilotto’s studio and said, ‘Hey, I’m Rebekka, I will work for you!’ It was a little crazy, but I was lucky because they had work for me to do.

What did you do for Pilotto?
I worked as an assistant there for a year. Peter Pilotto’s combination of prints and patterns is amazing. I had the opportunity to learn a lot. At the time it was a small brand, so I got to do patterns, design, production…a bit of everything.

Why did you decide to launch your own line?
I always thought I wanted to work at a big brand, and then one day I woke up and thought, ‘Why not do my own?’ It was kind of crazy. I spoke to my family and friends—and my family was helping me a lot—and they said I should just go for it.

How’d the launch go?
It was difficult. It took about six months to get started; I had to do all of the bureaucratic things first. I found it hard to pick a style to focus on, and to figure out what kind of designer I wanted to be.

Have you had any mentors?
My designer contacts were in London, but I had already headed back to Austria. I did maintain a great relationship with the dean from my college, so I was able to get in touch with him to ask for his thoughts on my first collection.

How has your aesthetic evolved since then?
It’s more grown-up! In the beginning, I really preferred dark colors. I was just doing collections in black, basically.

Do you dress the way you design?
When I’m working hard, I like to sleep a lot, so I’ll dress really quickly wearing whatever I can throw on. It’s just functional and comfortable. Most of my clothes are black, so it’s really easy to get dressed. I usually wear trousers and something on top. I don’t really wear dresses.

How did you land on the Berlin Fashion Week calendar?
Berlin Fashion Week is much bigger than Austria, so that’s why I show there. I never wanted to go back to Austria.  I wanted to see the world and go anywhere else! I moved away from home when I was 14—I went to school abroad, then studied abroad in India, then I lived in London. It was very difficult for me to be creative in London. It wasn’t the landscape I’m used to.

Are you a fan of Berlin?
I’m there every two to three months. On one hand, I really love Berlin; on the other hand, I’m not really sure. When I’m there, I like to go out, of course. I’ll also go to lots of museums and such. I do like this one particular street, Unter den Linden. Berlin is very creative, new, fresh and young, but I don’t like the people there.

Why not?
They just talk the whole time!

What’s life like back in Austria?
I live in a really, really quiet and small town in Austria. I don’t really have neighbors and I can see the mountains. I love cities, too, as they can feel creative—but I prefer to live in a quieter place.

How do fashion sensibilities differ between Austria and Germany?
In Germany, the people are dressed much better. Austria is very sporty, especially in the west of Austria where I live. There are a lot of tourists and a lot of winter sports. You can go skiing everywhere! So, people usually wear jackets with jeans. They don’t have a lot of courage to wear crazy clothes in Austria. That’s a bit sad—and that’s why I love to go to Berlin.

What’s the story with your latest collection?
I started experimenting with the 360-degree look, so there’s stuff going on in the front and back. We also worked with a doll-like look. The collection is called panem et circenses, which means bread and circuses in Latin. Have you seen Hunger Games? That’s like the 21st century equivalent of the ancient Latin translation. So this collection is a mix, somehow, of Hunger Games and the circus.

Are you a big Hunger Games fan?
It was just the right movie at the right time. My sister really adores The Hunger Games, and she forced me to go to the cinema to see it with her as a birthday present. While I was watching it, there was a place in the movie, the Capitol, that really inspired me.

Any other projects beyond your namesake line?
We’re launching a second line right now. It’s called You Know You Want It by Rebekka Ruétz, and a supplemental collection to a commercial shirt brand. It’s for men and women. It’s the first time I’ve worked on men’s clothes before.

What’s up with the energy-charged fibers in your threads?
I figure that we wear our clothes so often, we should get something back from them, right? I’m fascinated by chakras. Recently, I designed a print that depicts the different chakras and their locations on the body, done in flocked prints. When you wear the clothes, your chakras get more energy—and you feel more beautiful. People tell me they feel better when they wear my clothes when they’re sick! But it depends, of course, if you believe in such things or not. If you don’t, it’s just a nice piece of clothing.

What’s the feedback on your collection been like so far?
Really good! Customers love that the pieces are not made in China; they’re made right in Germany. That’s part of my philosophy as a designer.

Your line debuted in 2009—what do you want to do in the next three years?
I want to show my collection in London. That’s a very important goal for me. In three or four years I also plan to have a men’s collection— it definitely won’t be sporty. It will be a mixture between casual and elegant.

And on the retail front?
I hope we’ll be selling in Europe—specifically, London. That would be great! There are a lot of interesting stores, but I don’t have a favorite. The best would be to be featured in all of them.

DESIGNER CRUSHES, DECODED!
The trio of industry stalwarts Ruétz draws inspiration from—and will hopefully soon be sipping lattes with—each and every day. Hey, a girl’s gotta dream!
COLLAB-HAPPY! “Haider Ackermann would be great to work with one day.”
JAVA WITH THE KAISER! “My dream is to drink coffee with Karl Lagerfeld; I want to see what he’s like in person.”
SHADOW DREAMS! “I’d love to see how Vivienne Westwood works. I’ve never met her.”

From The Daily Berlin: Kilian It!