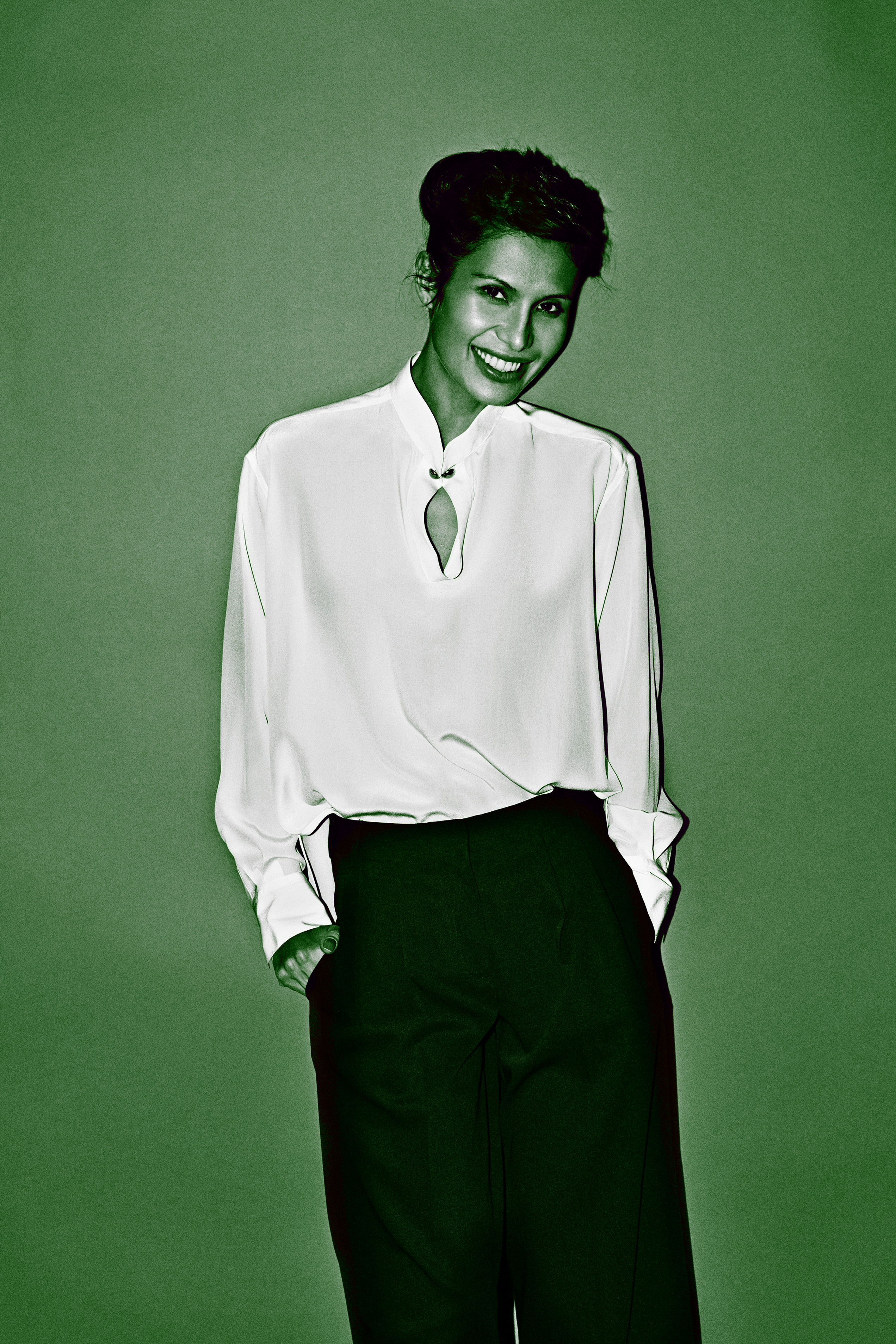 Much has been written about Vionnet’s owner Goga Ashkenazi. The Kazakhstan-born Oxford graduate made her fortune in the oil and gas business before setting her sights on the fashion industry. For the past four years, Ashkenazi has been working to rebuild the house of Vionnet, which was no easy task given the brand’s esteemed history. Her credo is to honor the heritage behind the brand, while telling the story of its future. Her evocative campaigns have married the elegance of the plissé, made famous by Madame Vionnet, with the essence of the powerful women Vionnet targets as its modern clientele. To that end, the Fall 2015 campaign, shot by Dylan Don and starring Anna Cleveland, just might be the best yet. Here, Ashkenazi explains her vision for Vionnet.

Why Anna Cleveland?
I had met Anna personally in Paris. She was a guest of Vionnet at an event we did during Fashion Week, and we met and really clicked. I saw her at Jean Paul Gaultier’s final ready-to-wear show, and I don’t go to many shows, but this was, of course, the last one of such a master. I was just really struck by the way she walked and the way she moved. She truly encompasses everything that the Vionnet woman is, which is pure elegance. I can tell you this won’t be the last of our collaborations.

What was the inspiration behind the campaign?
I went to the Horst P. Horst exhibition at the Victoria and Albert Museum in London, because my sons are in London and I travel a lot between the two cities. I went there with my children and I was really inspired by these photographs, some of which featured women in Vionnet, and they had on display nine of the dresses that had been photographed. Two of those dresses were by Madame Vionnet. I knew, of course, that Horst P. Horst had photographed many women in Vionnet. I wanted to take that as inspiration from our past and marry it with the quirkiness of our modern take on fashion. Of course, Anna couldn’t have been better for this. She has a very classic elegance, but her features are unusual. She’s a beautiful girl, but not a standard beauty.

How did you first start working with Dylan Don?
He’s a very close friend of mine. In a way, I’m trying to create a creative dialogue around Vionnet. I want to give chances to unknown photographers and people who are trying to fulfill their creativity in this business, which I’m sure as you know isn’t the easiest thing. He’s very talented, and we’ve worked together on the last three campaigns.

How did you first meet?
He was introduced to me by a close friend of mine to stay in Villa Vionnet during the Cannes Film Festival a few years ago. So he was the guest of a guest, but we became very good friends.

How do you choose the looks for the campaign?
In one of the shots, the dress is actually a top and it’s missing the back. It was the most immediate choice, because we wanted to photograph it from the back. It was one of the most beautiful images from the shoot. There was only one color image, whose movement takes inspiration from the photographs of Isadora Duncan dancing in Vionnet dresses in the ’20s. That dress has meters and meters of fabric and the plissé of the fabric was invented by Madame Vionnet. The skirt on the dress is quite spectacular.

Who else was behind the campaign?
We shot in a studio in Milan, and everything was done as a family internally. We used the same Italian hair and makeup team that works with me. They’ve become friends, and I work with them quite a bit. The co-creative director was Babeth Djian.

How long does it take you to select the final images?
It’s funny you should ask that. I have the most terrible time doing it, because there are so many beautiful images. When Dylan comes to Milan, he stays with me and we look through the images, so he was completely available to me. That’s the great thing about working with a friend. We just had dinner together and looked through all the photographs. I spent at least five hours looking through the images. It’s very difficult to choose from them. You look at each one and you say, “No, but I love this one!” I think I gave 30 images to the retouchers. It was quite a process, I tell you.

You started your career in the energy business. What has surprised you about the fashion business?
My parents sent me to Oxford, which is fair enough, because they wanted me to have an education that would earn me a tangible salary. I went into the energy business, because there was a lot of opportunity that presented itself and I have to say, I don’t have any regrets, but fashion was always my passion. However, a few things surprised me about the fashion industry. The first was that it was as hard if not harder, at least for me, as the oil and gas, gold mining, investment banking industries, and all of them put together. Second of all, people are extremely passionate about what they do. No one has come to me and said, “Goga, it’s the end of the working day. I need to go.” This kind of dedication is unmatched in any other kind of business that I’ve seen before. But thirdly, I was running away from politics in the energy business. However, it really surprised me how much politics are involved in the fashion industry. There are more politics than in politics.

What’s been the most rewarding part about reviving Vionnet?
The most rewarding is when I see beautiful women on the inside and out wearing the Vionnet dresses, and when Vionnet gets the appreciation that is worthy of the name. You can imagine that taking on a brand like Vionnet is much more strain on a person than just starting a line and calling it your name. You have the responsibility of the amazing work that was put into it before by the most incredible and talented Madame Vionnet. Now our work needs to be worthy of all that tremendous talent and heritage.

Who have been your biggest supporters in the industry?
Stefano Tonchi has been one of our biggest supporters. He’s been a friend since before I went into fashion, and I love W magazine. Carine Roitfeld has also been an extremely close friend and support. Babeth Djian, Olivier Zahm of Purple magazine, Fabien Baron of Interview, and Glenda Bailey of Harper’s Bazaar have all been extremely supportive. There are quite a few people we are very grateful for.

What is something that people don’t know about you?
Oh, my gosh, there’s so many things that people have written that aren’t true. There’s too much that’s been written about me that I think is unnecessary regarding the size of my house or how many people work for me. When I read about it I get angry with myself for allowing the media to see this. So I think it’s important to be more private, but I would like to think there are quite a few things that have not been written about me that are reserved for my friends and for my inner circle. I’m very social and I love being around people. I think that maybe not everybody knows that I very much enjoy my work and that I’m here from the early morning until the very late evening. I’m not somebody who sits at home and who came into this business just to speak to the press and do nice photo shoots. I just enjoy the process of creating clothes.

How is the demi-couture line doing?
We established the demi-couture line for our hundredth anniversary, and we have now incorporated this into the main line. It’s a capsule collection that we don’t show on the runway, but we show to clients. I want to make couture a little bit more affordable. It’s still a luxury product with couture techniques. In today’s world, I find that perhaps spending hundreds of thousands of dollars on a dress is a bit excessive for my woman, no matter how much money she has.

What’s next for Vionnet?
We’re about to open a new flagship boutique in Paris on Rue François 1er. Of course, Madame Vionnet had her aetelier at 50 Avenue Montaigne, which would have been ideal, but it belongs to one of the big corporations that I can’t compete with. We’re going to try and create a little Vionnet hub. We are going to have a demi-couture designated area and an atelier, and we also created a new concept inspired by our heritage, which will have a technological twist. At the same time as the store opening in Paris, we will also be starting e-commerce. I can also tell you that I’m just in the final negotiation stages for a store in New York City, so that’s my next priority.