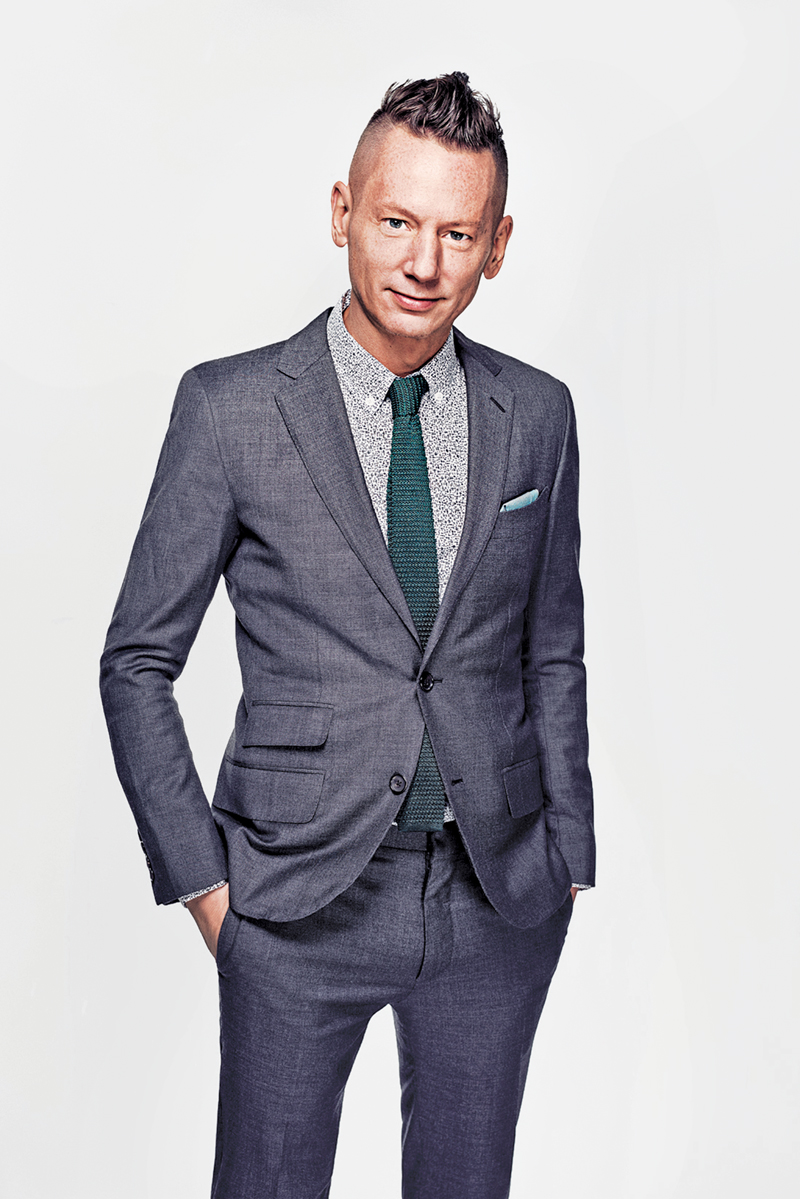 After nearly 20 years at GQ, Jim Nelson’s status as the king of cool remains uncontested.

You’ve got a guy in a Superman shirt on your September cover.
We’re riding high on the September issue—[Carolina Panthers quarterback] Cam Newton is on the cover. We always think of September as the moment when the fashion calendar, and the year, begins. We want to have somebody on the cover who represents that, in their manhood and style. Mario Testino shot the story, and their energy was perfect. We’re living in this maximalist era: People are allowing their inner peacock to come out a little more. We’ve lived through a period of minimalism in the past 5 to 10 years, and I see that shifting. Guys want to bust out a little more, and misbehave. That’s a good thing.

Kim Kardashian’s first GQ cover, which came out in July, generated a lot of attention. What took you so long?
Sometimes we wait for the right moment to make it “our” moment. It was the 10th anniversary of our Love, Sex & Madness issue, and she represents female beauty and where we are as a culture. She and Kanye West have increased and expanded their brands by being together. I had also wanted to work with Mert & Marcus for a long time, and it felt like we could make an event out of having them all together. What I love about Kim is that when she does something, she embraces it 100 percent. We broke records online—we had 2 million unique visitors in 36 hours.

In the interview, Kim essentially called Taylor Swift a liar, and the story went nuclear. Did you anticipate all the hullabaloo?
I knew it would be news, but I didn’t know it was going to be as big as it was. We had to be fair to Taylor, whom we also love, and she gave a really great and thoughtful response. We knew the internet would do whatever it always wants to do with any kind of dispute. There’s some part of it that feels like public comic opera. We’re doing our part to support that.

Is she still selling?
She is! When you put someone like Kim on the cover, you are going to get some real haters on social media. People are always saying, “Cancel my subscription!” which never really happens, but you’re also going to bring in some new people. You have to mix it up. Some of our readers had a problem with Justin Bieber; we were convinced by the music. He finally put up or shut up, and put out a great record. He looks great in clothes, too.

You’ve put a lot of effort into rethinking GQ.com this year.
We made it sleeker and faster. That was really important to us. I’m proud that it looks bolder. We have a new homepage. For some people, in the age of social media links, it’s not as important, but we have a very sizable audience coming to us through the homepage. The site has gone up 20 percent in traffic. We’ve concentrated on being careful of what our reader truly wants. We’re spending more time with voice and wit, with writers who showcase GQ. I hired Caity Weaver from Gawker. I would basically go there just to read her stuff. I had a new website position, and I was meeting all kinds of people, and I ended up promoting Jon Wilde from within. He was the best example of what I call “printagration”—bringing print and digital together so each of us gets stronger. For years Jon had edited the Manual section of the magazine, and he put his name in the ring to run the website. I’ve been delighted how he took to it so naturally. The web team has somebody who has really grown up in the GQ voice.

What other projects have you tackled?
We launched GQ Style, which is for the reader who wants luxury. We’re creating a lot more video content on our site. At the NBA Draft, we hooked up with Instagram and did style celebrations of the youngest talent. In the year ahead I want to concentrate on how to make digital look bold and different. And I was just in Santa Fe, New Mexico, on the set of a movie based on a GQ article. It feels more like a media brand than just a magazine.

Details folded. It’s a new day at Esquire. Why is GQ still standing strong?
I believe it has to do with putting the reader first. We always begin with every story by asking what the reader wants out of it. I want to affect people. I want them to come away from a story entertained, or think it’s the most heartbreaking piece they’ve read. From the beginning, I’ve always had a keen sense for reduced attention spans. I recognize the reader has a lot of things coming for him or her, and I want to reach them right at the moment of their curiosity. I tried to do that with fashion at the beginning. I didn’t want to put people in clothes, in fields, looking into the distance. Guys want clear messaging and clothes styled for their lives.

Which designers are you into these days?
I’m very eclectic. I wear a lot of high/low. I’m loving Gucci and Valentino right now—also Michael Bastian, Todd Snyder, Gitman Brothers, and Saturdays. I love Common Projects shoes. Virgil Abloh is a really talented designer. In the past year, we’ve been celebrating designers who are truly making a mark. I’ve been here for almost 20 years, and the reader is more advanced about the style world. Men have come a long way.

What do you think about the changes at Calvin Klein?
Italo Zucchelli is a friend, and I was pained for him, but I also recognize that Raf Simons is a genius. I expect it will bring a level of energy and critical attention to that house that will be very exciting. I expect some beautiful things to come down that runway. Raf is what everybody wants in fashion. He has an uncompromising vision. I’m excited whenever that is celebrated. Vision is rarer than you think, and something to be celebrated. I’m excited when I see a fashion house bet big.

What do you think Italo will do next?
He’ll come back in exciting ways. He’s just too talented not to. I don’t know where he’ll crop up, but I’m rooting for him. There isn’t a lovelier guy out there in the fashion world.

Next year will bring the 60th anniversary of GQ. How will you celebrate?
We’re going to feel proud and go into the year feeling good. It’s rare that a magazine has this much history and is stronger than ever. We’ll devote one of our fall issues to some 60th anniversary celebration. I always say that I don’t think readers care so much when you’re just celebrating yourself. We’re thinking about distilled knowledge, and trying to suss out what in fashion still endures. The rest is secret!

How closely do you work with Anna Wintour?
A fair bit, partly because the conversation of the company has changed over the years to the fact that we are all one company. That’s been something that [Condé Nast CEO] Bob Sauerberg has talked a lot about, and Anna believes in thoroughly. She’s also a great proponent of transparency and communication. I appreciate that so much—having someone who wants to have conversations about whatever the issues are. She’s a sounding board, and a great listener. Nobody is better at follow-up than Anna Wintour. We’re all so busy, and it’s great to have somebody who keeps things moving and clear. It’s been great.

She’s such an icon. Do you ever get awestruck?
Of course. I’ve never met anybody whose public persona is more different than what they’re like in real life. She’s very easy to talk to. She’s direct, and I appreciate that. She’s a problem-solver.

How much longer do you think you’ll want to stay here for?
That’s a great question. As long as they’ll have me? [Laughs] Everyone needs to have a side hustle, so I think about that. Should I write a script? Should I write a book? But I want to have this as my main hustle for a very long time.