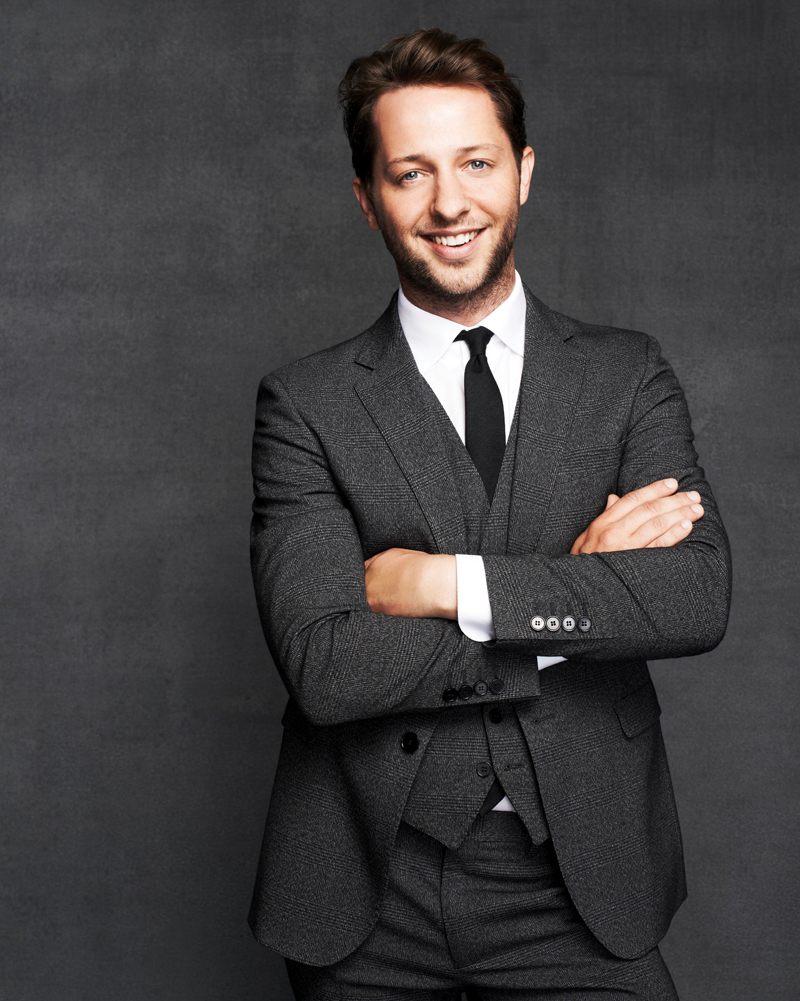 Who better than Instagram superstar and bona fide bon vivant Derek Blasberg to carry on Elsa Klensch’s legacy? This year, Blasberg assumed hosting duties for a fully revamped CNN Style, and he’s already lined up interviews with fashion’s A-listers like Karl Lagerfeld, Emma Watson, and Jessica Chastain. With a Rolodex to die for, everybody’s bestie is bringing fashion to the masses.

Was being on CNN always a dream?
Growing up, my parents refused to get network cable, so my access to CNN, MTV, HBO—all that programming most kids of the ’90s take for granted—was a covert operation. I can remember sleeping at friends’ houses on Friday nights so that I’d be over when Style With Elsa Klensch would be on CNN on Saturday mornings. At the time, I’d dream of one day being on that show—but I’d also be dreaming of being in Madonna’s “Vogue” video!

How did that gig come together?
I assume you mean the CNN gig, because I’m still waiting for Madonna to call. [Laughs] CNN Style came together when CNN International decided to revamp the genre of programming that Elsa Klensch pioneered, fashion industry journalism on TV. Awhile back, cnn.com introduced the Style vertical, which peels back the layers of art, architecture, design, and fashion that affect the world at large. The website’s momentum kicked off the TV show, which certainly pays homage to Klensch, but also has a fresh, bold take on the larger world of creative arts. I don’t take for granted how fortunate I’ve been in my career to work with some of the people and brands that I’ve long admired. CNN is iconic, and to be a part of a show that speaks to a world I find inspiring is literally a dream come true.

Do you work closely with the producers?
Journalism is teamwork, whether it’s working on a story for Vanity Fair or a segment for CNN. My high school English teacher had a T-shirt that said, “Behind every good writer is a great editor,” and I could make the same T-shirt for the CNN team that says, “Behind every good host is a great producer.”

What stories have been the most memorable?
For the episode in Paris, Karl Lagerfeld let us film in Coco Chanel’s apartment on the rue Cambon, which was surreal. It’s all been meticulously maintained since she died in 1971. For the episode in Rome, we watched Sofia Coppola direct her first opera, La Traviata, and Valentino did the costumes. We were perched in a box at the Teatro dell’Opera di Roma during rehearsals. And oh, in our latest episode in Copenhagen, the architect Bjarke Ingels took us on top of this industrial power plant where he’s building a giant ski slope on the roof. I’m afraid of heights, so that was pretty memorable.

The show covers territory far beyond fashion. What stories are you wanting to tell?
Fashion is only part of the programming—we like to look at the art and architecture of these destinations, too. You can’t go to Copenhagen and talk about style without mentioning that city’s historic design presence. What I think is great about CNN Style is that it approaches the topic in a broader, more complex way. Speaking of Mademoiselle Coco, she once said something—and I’m paraphrasing here—that style is in the sky, in the street, that it has to do with the ideas and the way we live and what’s happening in the world. That’s the definition of style I have in mind when I think about this show.

What did you learn from interviewing Carine Roitfeld?
I’ve known Carine for years, but what’s great about being a journalist is sitting down with friends and having the capacity to grill them. Carine is always game. Her book was called Irreverent, which is a great word for her. Even though she’s best known for sexually provocative imagery, she’s actually quite playful. In our chat, she was talking about French style and she said the trick is a small, mysterious imperfection. She pointed to a hole in her fishnet stockings and winked, “Don’t you wonder how I did that?”

Who would you like to interview in the future?
I’m drawn to women whose style transcends what they wear. Michelle Obama comes to mind. Maybe we can do an entire episode that flushes out the history of the pantsuit anchored to an interview with Hillary Clinton?

Will you be filming during Fashion Month?
The October episode is all about London, so we’ll be filming at London Fashion Week.

How are you managing your time with all your different projects?
Time management can get tricky. I feel like my phone battery is always dead and I get my best sleep on an airplane. But the worlds of art and fashion are in such a time of…disruption, which I think is an overused buzzword, but it’s overused for a reason. It’s a fascinating time to be chasing these stories and meeting these new personalities.

How does it feel to be compared to Truman Capote by New York magazine?
It’s flattering—I think. It didn’t so end well for Truman Capote.

Is it a fair comparison?
Depends on what you mean by fair. He was super social, and, yeah, I like to go out. But he was by far more accomplished in a strictly literary sense—he was around my age when he published Breakfast at Tiffany’s—and he was also very short and had this high-pitched voice that probably wouldn’t do so well on CNN Style. He could also be cruel, and betrayed his friends. When he died because his liver failed, Gore Vidal smirked that it was a good career move.

What did you do this summer?
The haute couture shows were a highlight. For the past decade, people have been claiming that couture was a dying art, but this summer, I traveled to Paris, and then Rome with Fendi and Naples with Dolce & Gabbana for eight days of couture shows. Looks like there’s still some life in there!

How do you feel about watching yourself on the show?
Oh, I cringe the entire time.

When will the next episodes start airing and what will be featured?
The next episode of CNN Style is focused on Copenhagen and features interviews with the model Freja Beha Erichsen, the artist Olafur Eliasson, and the architect Bjarke Ingels. It airs on September 10.

What do you want to conquer next?
That’s a long list. The show hasn’t gone anywhere in Africa yet, which I’m dying to explore. And I’d like to look at more familiar cultures, too. For my 30th birthday, I did a birthday party back home in Missouri and had a big barn dance: Wouldn’t it be nice to explore cowboy couture with CNN Style?

INSTA-BLAS
One thing we’ve come to know is that ladies love their Blasberg. Katy! Kendall! Karlie! His IG feed is a who’s who of the most fab women in the world.

Watch! Marc Jacobs Presents to Kaia Gerber at the FMAs