Fashion Illustrator and Instagram Star Julie Houts Is a Hoot! 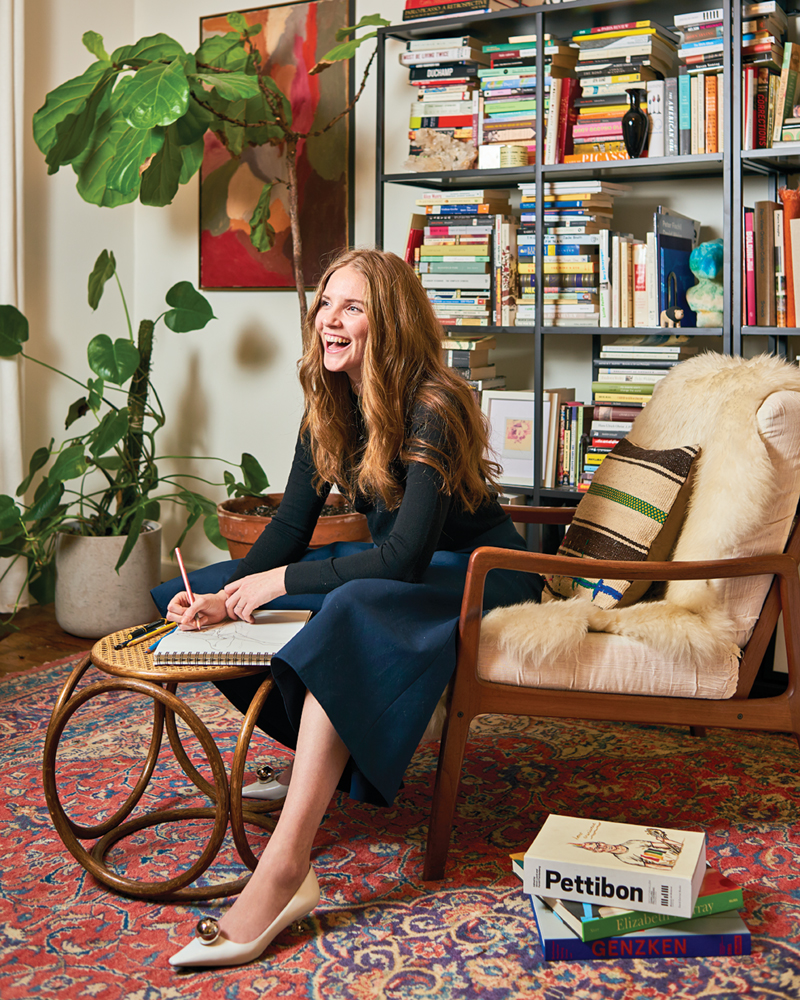 If you haven’t already ogled the work of illustrator du moment Julie Houts (@jooleeloren), we’re borderline concerned. A designer by day and Instagram star by night, she’s found a full-time fan base with her witty musings on the fashion industry and beyond. Turns out Miss Houts is a hoot!

When did this all happen for you?
I grew up going to art camps with my sister and then I studied painting at the School of the Art Institute of Chicago before I realized that I was a very bad painter. [Laughs] I transferred into fashion there, which was good, but at that time, it was a very avant-garde program. I was set on working in the industry, so I transferred to Parsons and finished up there and started working at J.Crew. I just started illustrating on the side for fun. When I started posting them on Instagram, I had 15 followers. Slowly, it built.

Ever dream of having your own fashion label?
Maybe for half a second, but it was always clear how difficult and expensive that is—a huge part of it is not the design work so much as running the business. I was always super content to be one of the pack; work/life balance was always super important to me.

You have 128,000 followers now. When did you realize that this was more than a side project?
It’s still kind of happening. I’m still kind of shocked and surprised anyone looks at it. But when a few sites, like Man Repeller, wrote about it, I realized that it wasn’t that personal anymore.

You deal with some very personal themes like body image, stress, and imperfection.
I’ve had to kind of tune out that people are watching or just not put too much pressure on anything.

What do your parents think of your new fame?
[Laughs] My poor parents! They’re obviously super proud and excited, but I think they are also like, “What are you putting on the Internet?”

Have you ever thought about animating your illustrations?
Yes! I can’t talk too much about it, but I’m working on a TV show with my best friend, Catherine, who’s a writer. It’s in the early stages; we’re writing the pilot.

Have you been shocked to discover that you have some high-profile followers?
Yes, but it’s such a sad story. In middle school, I was obsessed with John Mayer. I loved him. It’s so embarrassing! I thought he was the best. I don’t remember how I found out he was following me, but I think he liked something and I happened to catch it. I was like, “I’m done now.” My middle school self was dying. But then a few months later, I checked to see if he was still following and he wasn’t. I was like, “God, what did I do? What did I do to lose John Mayer?”

Who are some of your biggest fans in the fashion industry?
Actually, Donald Robertson (@drawbertson) was probably one of the first to find me and re-gram one of my illustrations. His daughter had shown him my Instagram account. A few days after that my friend had showed my illustrations to Alexa Chung and she re-gramed something, so between the two of them, that was the jumping-off point.

Your work features some recurring characters—rats, for example. What’s the idea behind that?
Everyone is always asking me that, but I actually don’t know. I had a pig that I drew for a while. I don’t know why I drew that either! Well, I actually used to have this full-on mouse infestation when I was at Parsons. I was never home. I would come home, sleep under a pile of coats for two hours, then go back to school.

Speaking of coats, you also have a second Instagram called @FurCoatsOnEbay!
[Laughs] I’m always secretly like, “That’s the one.” I was just looking for fur coats on eBay and then I realized how amazing everyone was on there, modeling their fur coats. I never even told anyone about it until one night I accidentally posted three fur coat photos on @jooleeloren. Then I had people writing things to me like, “I’m going to murder you in your house!” It was crazy. The things people write…

Do you have a favorite illustration?
I don’t, but I have noticed I often end up liking ones that other people don’t like. It will be something like where I’ve drawn a hand that feels like a breakthrough for me. I made a print of this one where the girl is punching herself in the nose and I just love that one, but it’s my worst seller.

Is there any recent trend that you’re looking forward to making fun of but haven’t yet?
I’m really into reading about wellness right now. It’s overtaking fashion in a lot of ways, so I’m thinking a lot about that right now.

Do you have any other projects in the works?
I’m working on a book with Simon & Schuster, which will be out sometime this coming fall. Everything is due in April. They’ve been pushing me to do longer essays to accompany my drawings, so I’ve been writing a lot more. I usually have longer ideas in my head and I always have to whittle them down to a phrase for Instagram, so it’s been interesting.

Where can you be found during Fashion Week?
In bed watching a lineup of Turner Classic movies and RuPaul’s Drag Race on an iPad, eating Indian food. Usually, wearing pilled Champion sweatpants and a Larry Bird T-shirt with green knee socks. Mario Badescu pink stuff zit cream is not necessary to complete the look, but it does add a nice pop of color. Have you ever tried to get curry and red wine out of a comforter? Truly challenging. It really soaks in!