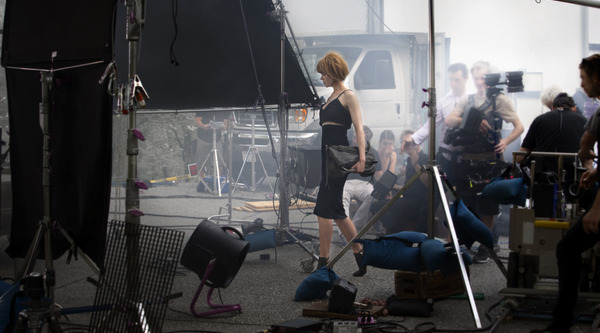 Yesterday Jimmy Choo announced that Nicole Kidman would be fronting their Autumn Winter 2013 campaign. Check out these exclusive behind-the-scene photos as Nicole channels her inner vamp. It’s the brand’s first time using a celeb to front a campaign; they honed in on a Hollywood stalwart for the occasion, clearly! Photographer Mikael Jansson shot Kidman in three scenes, intended to channel the seductive strength of a Hitchcock heroine. In the pics, Kidman’s lusciously long legs can be seen showing off the brand’s new Dane lattice booties, pointy Talan silettos, and Tamba black leather thigh-high booties. To die for, non? As for the other accessories, we’re definitely putting those sparkly shades and that black Blare biker bag on our Fall must-haves shortlist. Plus, we’re loving Kidman’s cropped ‘do courtesy of hairstylist Garren.

Why Kidman, exactly? “Nicole Kidman has many layers, on the one hand she is an internationally renowned award winning actress, on the other hand she is a mother and a wife,” said Jimmy Choo’s creative director, Sandra Choi. “The Jimmy Choo woman plays out many roles in her life– from being successful professionally, to being in love and embracing a sexier more glamorous role to being a mother and a best friend.” But Choi could have easily been talking about herself. This year she not only took on the role of sole creative director at the company, but she also just gave birth to her second child…and, of course, landed a campaign coup with Kidman. Bravo!

The 2018 Golden Globe Nominations Have Been...