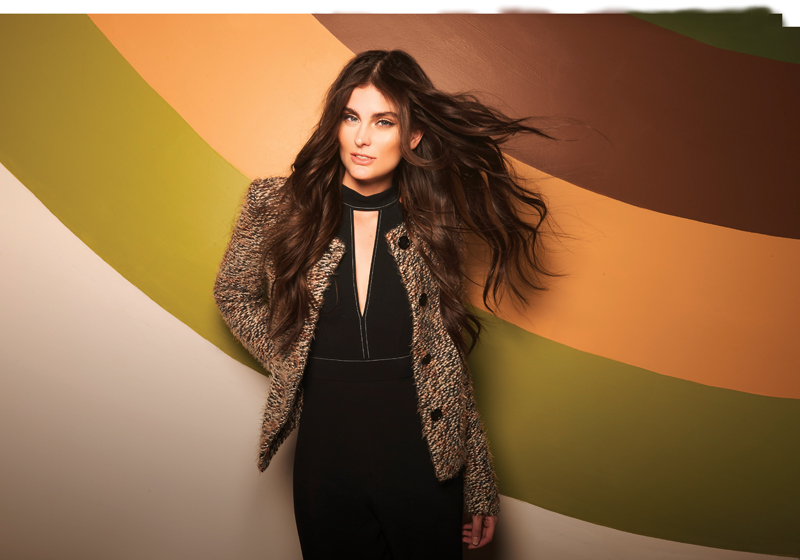 Toronto-based designer Ellie Mae tunes in to turn out a line of musically inspired and lyric-lined outerwear. Whether it’s an ode to Johnny Cash or a Fleetwood Mac hit, there’s something for everyone’s inner rock star.

What were you doing before you launched Ellie Mae Studios?
I had a jewelry company. My office was in the back of my sister’s retail store in Toronto. I loved it, but I never really saw my life in jewelry, so I moved to England to take some short courses in fashion at Central Saint Martins.

How did you come to launch a line of outerwear?
At the end of my first year, I created a small jacket line. I was traveling back and forth to New York to work with this patternmaker I found on LinkedIn. Luckily, she wasn’t an ax murderer. [Laughs] Then I made all these one-off jackets that my sister so nicely let me sell in her store. I liked the process, so I decided to make a proper collection.

Do you have any style icons?
I never looked to anyone for style, and I didn’t even know that much about designers. My parents encouraged whatever I could do creatively to express myself. My mom let me wear whatever I wanted, so I lived most of my youth in Ninja Turtles pajamas.

Music has a major influence on your designs. Which jams are on your playlist at the moment?
I have a soft spot for Bruno Mars—I listen to his new album all the time. Everything I am listening to right now is ’80s pop music, from movies like The Breakfast Club and Girls Just Want to Have Fun. Cyndi Lauper anything!

The linings of your jackets are covered in song lyrics. Did you launch with that concept?
Yes! Even the jackets that I created for myself had quotes in them. When I was living in England, I fell in love with the library at Central Saint Martins. In one old book about denim, there was a story about how Johnny Cash and Elvis wore jeans back in the day, even though denim was frowned upon. Allegedly, when Johnny Cash was asked to explain his idea of a day in paradise, he said, “This morning, with her, having coffee.” He was referring to June Carter [Cash]. For some reason, that stuck with me. For the rest of my time in England, all I thought about was how to get that quote in my jacket. I found some cheesy online store that would print an awful lining, but I didn’t care because I just wanted it in there!

The first jacket Ellie Mae designed, with a Johnny Cash quote in the lining.

What are some other lyrics or quotes found on the linings?
My Fall collection includes different artists from the ’70s in each of the jackets. We have a ton of Fleetwood Mac and Billy Joel. I figured that if I was going to make a soundtrack, I would like all the songs to be from the same musical era!

Are you introducing anything new with this collection?
Yes, we’ve developed some new bodies and fabrics. I was looking at a lot of historic British pictures with houndstooth and dog-walking jackets that go down to the knees. There’s an old-school British feel in the line, like embossed velvet and gold antique buttons. We kept some of the oversize fits, but we have a more tailored feel, like a more proper British coat.

Where is the collection available in the States?
We work a lot with Rent the Runway. We also have our e-commerce site, elliemaestudios.com—we ship all over the States. One girl rented a jacket for her engagement party. I don’t know who she was, but she’d tag us in all these photos. Everywhere she went she had on her Ellie Mae jacket. I felt so honored, and it was so cool to be part of a big chunk of her life.

Who is your ideal brand evangelist?
Danielle Bernstein of WeWoreWhat. I love that she can put on anything and look so cool. I also love a little [of Arielle Noa Charnas’ blog] Something Navy. I just love [Charnas’ daughter] Ruby. I want to make a jacket for her!

How have you grown your team as the brand has become a success?
We’ve hired some new people, and we’ve gotten deeper into marketing; we’re learning a lot. I am really excited to start adding fun things to Spring, like oversize denim jackets.

Any fun vacation plans in the works?
I’m planning to take a trip to California in March with a few girlfriends. We’re going vintage-hunting. Hopefully I’ll be able to make a few one-offs.

What are you hoping to gain from Coterie this season?
This is only our second year at Coterie—the company is only two years old. Baby steps are as important as large steps, so the plan is to get the word out. We’re partnering with an American showroom this time, so I am looking forward to seeing us grow and getting more feedback from buyers.

Daniella Vitale on the Future of Barneys, Brioni’s CEO Exits